by Peter Lok Information Title: FALLBACK, Fire and Ice This map is a single player level. As Corporal Shepard, you are part of a platoon of marines supplying additional security at Monte del Oscuro (an astronomical research facility). Things never work smoothly as usual. Find a way to escape and lead your men to safety. There is a flashback to a Balkan Town to rescue a UN Representative from some warlords. Finally, Ice, a massive set of levels set in Antarctica. Something has been found in the ice and a number of foreign powers desire it. After the little accident at Monte del Oscuro, you have been given a hardship posting. Defend the base against hostile forces and rescue the scientists (or not).

You MUST NOT distribute this level UNLESS you INCLUDE THIS FILE WITH
NO MODIFICATIONS!!!. If you don't co-operate, then DON'T DISTRIBUTE
IT IN ANY FORM!!.

THERE ARE TWO WAYS OF INSTALLING THIS MAP SET.
The 2 installations are for the Demo and Retail versions of Opfor. The demo is a standalone
version is the most straight forward to install for. For the retail version, locate the
opfor directory under the Half-Life directory and use that directory to install the map
set to.

Fallback plays the same under either installation. The Fallback maps override the maps
with the same name from the demo or the real game (I had to do this to get the maps
to run in the demo!).

To install for Opposing Force Retail:
NOTE: Save your original sentences.txt file stored in the opfor\sounds\ directory. I've made some
minor changes but they shouldn't even affect regular game play too much.

1. Copy the fallback.wad file into the gearbox directory.
Copy the sentences.txt into the gearbox\sound directory.
Copy the *.spr files into the gearbox\sprites directory (create it if you don't have one).
Copy the pak1.pak file into the gearbox directory. If for some reason you already have a
pak1.pak present, change one of the names to pak2.pak and play on.
TROUBLESHOOTING THE .PAK INSTALL (a pain, but necessary)
If you have the high-definition pack installed, the new models are in a pak2.pak file, and you
can replace the pak1.pak file without problem, or just install the FFI pak1.pak as pak3.pak.
Just remember the pak files need to be sequentially numbered without gaps like jumping from
2 to 4. If you can't find a map, check the numeric sequence.

If you unzip with the top level directory as the halflife directory, and use path names on,
the unzip should place all the files in the right place.

2. Run Opposing Force in console mode. Make a shortcut on your desktop with opfor.exe -console on the command line.
In the retail version of Opfor, make sure the console parameter is also present on the desktop shortcut that is installed for you.

3. In the console, type /map fb1 to play.
It is a good idea to save right away so if you die, you don't have to reload the map.
The first map in the set is called fb1.bsp
If you really don't want to start playing through the Fallback levels again,
you can start at Fire. Type /map fire to play from that point.

I tried optimizing the r-speeds, but some of the larger environments will tax your
machine. I would say a Pentium II 366 is a minimum requirement.

Notes
Enjoy it. I find it fairly challenging to play myself. Unlike Opposing Force, I wanted
to make a map set you could have your grunts play through all the way.

Original Forklift by Adam Grebinsky
Authors E-mail Address : shadow@cadvision.com
I did some retexturing and alignment.

Target Range by ???
Not sure. Used it for the target entities. Did a pile of retexturing.

Cafeteria Objects by 85miklof
Just saved me some work and I liked his phone.

A modified version of the antimass-spectrometer by Razor.
Baby anti-mass by Razor@claramail.com
Blackhawk helicopter by Kevin Quang.
ceiling camera by Razor
ceiling rocket turret by Razor
chapel by KEN_UK@excite.com
pepsi machine by bok choy
wind generator by [DRS]Ken_UK
Power switch by Rich4386@hotmail.com
Radar scope desk by decker@post1.tele.dk
Photocopier by Marhault (Dfieldy@Hotmail.com)
Fishtank by Unseth (unseth@nin64.com)
Pressure Chamber by Razor
The ceiling of the chapel on the map Fire is from Ken (UK)

Many of these prefabs were modified from their original state.

Thanks to all for playing.

My Background
I'm Peter Lok, a long time gamer. You might have met me playing Team Fortress as "Doh!!".
I have been a programmer/system analyst for 10 years, working with Oracle, Sybase,
Visual Basic, C, Java, and Powerbuilder.
Currently I'm also interested in switching over to developing online/multiplayer games
(server side work) from business applications.

E-mail: peterlok@hotmail.com I'd like feedback on the map good or bad.
My web site is at www.dragonridge.com
My other maps for Half-Life are Intolerable Threat (built levels 7-13 for it), Experimental Problems and No Regrets. 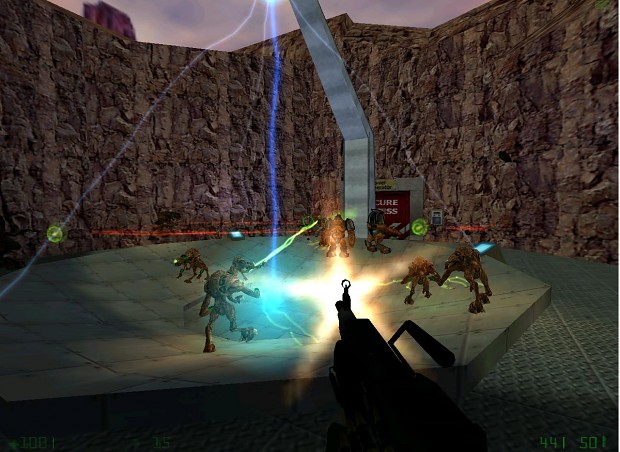