This is a non complete, Proof Of Concept version of the mod. With several maps to roam around giving a good example of the work produced for the mod. Load the console and have a look at the other maps not in the selection menu. Several weapons are available, please load the weapons test map via the console to play with them. Produced by Lightspeed Design Studios, this will be the first and final release of the mod. We would encourage people to start a few new mods with the over 400 custom model assets and nearly 1200 custom texture assets available, for gaming or Machinima. 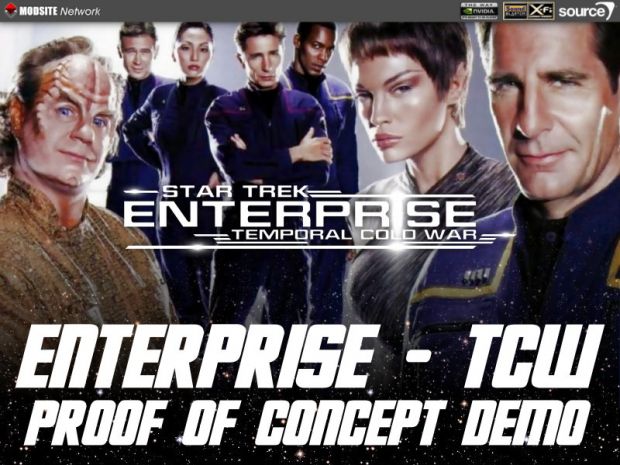 goddamnit! I've been looking for people like you... lol! you stole my Real name!

I hate typos. When I get to finish it.
Btw sorry to hear you guys shutting down.
Another good mod, being hung.... WHY?

Hi all. I downloaded and can't seem to figure out how to make it run. Does it need to be added to Steam? Thanks!

Unzip the files which are in their folder called Enterprise-TCW into your SourceMods folder: It is usually in your steam folder like:

DRIVELETTER:\Steam\steamapps\SourceMods (or wherever you have installed Steam)

Then restart Steam, and the mod will show up in the MyGames section.

Didn't work for me.

This is amazing. Much more than I'd ever expect from source.

I've just put this on my steam/sourceMods and restarted steam. But it doesn't show up in my games... does anyone know what happened?

Is anyone able to download this? I'm trying for a few hours now but seems either Filefront has trouble or the file itself has.

Can anyone shed some light on what this pack exactly contains? Are there any missions? Or is it just exploring the ship? And if so how many decks are there, is there a turbolift connecting the decks or do we have to load the maps serperately all the time, etc? Thanks in advance.

The download contains about 5 maps (all incomplete) and yes, you can load them separately in the main menu. Turbolifts are there, but do not work. No missions, mainly maps to show of where we were up to when the project ceased and how it looked. Sorry for the very late reply.

This is the OLD HL2 version. The mod has now been taken up and moved to the Crysis 2 game engine as a mod.