Discovery mod is a full-scale expansion pack for Freelancer focused on continuing the story started in the vanilla campaign. The mod is used by some of the busiest multiplayer Freelancer servers and has multiplayer features including player owned (and built) bases, jumpdrives, cloaking devices and equipment manufacturing. Discovery Freelancer 4.87: Conquest is set in the year 820 A.S. with the house Gallia beginning their assault on Sirius in earnest. Governments and regional powers far and wide now seek to respond to the situation, either by launching themselves toward a desperate united front against a seemingly unstoppable enemy, or seeking to use the resulting chaos for their own benefit. 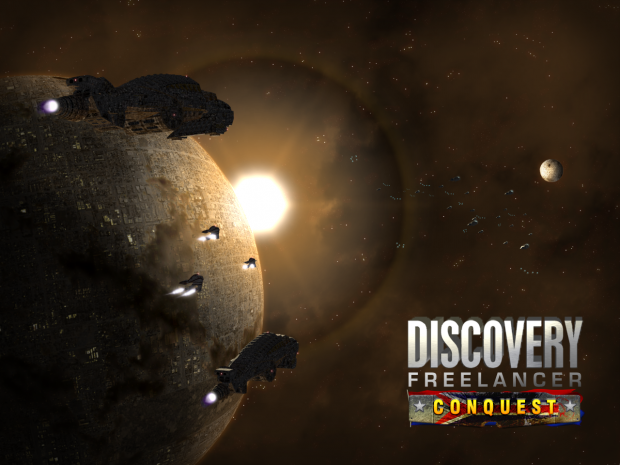 Its only lost time playing this mod in MP, and in SP its not offering anything. So i dont have an idea why to play it.

time wasted having fun isnt wasted - maybe YOU had no fun, but others do.

Hope new ships will be amazing. It's good to RP in properly made, beautiful textured vessel.

Good work guys.
I'm happy to play on Discovery since 2010.

Ah, and then somebody made anti-cheat and Doj ragequit, after aggravating the people who make the very game he attempts to enjoy, but paradoxically sabotages himself by denying the fun of others in his admin-hate war that nobody cares about! YAAAAYY!

nice to see 300+ are playing freelancer today even though its a decade old...p

Well these days you wont find here more than 100 players and comunity is dying every day, more and more. Somedays you wont see here more than 50 people. I think after couple of months, maybe years, those arrogant admins will be the only one who will play this mod.

True, true.
The rules alone make me not want to play on the server. They take too much fun outta the game.
The game is called Freelancer for a reason, and yet they tie your hands with everything they can get. Can't do this, can't do that...
Bans, and sanctions are a common thing in online games, but sanctioning someone(taking his credits, guns, etc.) who simply spoke Out Of Roleplay in system chat is harsh.
There is a reason it's online community is dying.
I'm not saying i'm happy about this, but they deserve it.

Well, also there's a reason why the main server has RP in the end of it's name.
It's a Roleplay server and belive it or not, it's not fun to Roleplay when someone is shouting lol or WTF for example. If you are looking something more relaxed, try other servers.
Does it need any more clarifying ?

Don't forget that the download contains IONCROSS, the tool that allows you to create your own server, so that you don't have to join the RPS or play alone.

"try other servers"
Thanks for the advice! Oh man, it's so easy. Why haven't i thought about this before?
Let me answer with a question.
Have you ever seen more then 10 people playing at the same time on other servers?

Um guys, i try to install this game and it crashes. I have correctly located the freelancer folder, followed all the instructions. What should i do? I didn't install it in FLMM folder.And i dont have flmm installed.

was your freelancer install clean? was it updated?

re install the game and then try..

I did that and still is the same result. I run win xp sp 3

try running as admin or something..

Bretonians must be sad... First being the last non-infected nation, then slaughtered bu Kusari and now invaded by Galia. How sweet.

This message has appeared when I was installing the mod. Can I fix it by myself or I should wait for patch?

long wait for this mod. hope they have better server support. keep up the good work , discovery guys

I want to write here a long commet about 4.80, to say my oppinon, but it is to long

Space France? Why the **** are they "seemingly unstoppable"? Shouldn't they be like surrendering the very second they see something approaching them and sticking baguettes up their ***?

Because France can actually kick ***, see the French Revolution.

id look at the revolution again. it was just a bunch of idiots thinking they can have their own free america. its a terrible, they just chopped a bunch of peoples heads off and paved the way for ******* bonaparte to lead their country to ruin. Again

Have you seen France's war record they only surrendered in one war which was world war 2 everyone just makes jokes about it because the English were salty from the 100 years war, the Napoleonic war, the French invasion of England in 1066 etc etc. Basically the French are better at warfare than the English and they just can't take it.

I did the download and ran the exe. Gives me an error missing dll. Please advise.

there is bug since the next update that you did recently, you cant loot enemy missile and flare when you drestroy there ship also the npc cant do that either please check when you have the opportuny or send me a link where to put the bug problems

Hey Is there a German version of the Upfdate? I can't update the version with the DSUpdate and can't download this file cause of my German version of the game. So is there a german Version of the mod? Anywhere? I know there is one, one of my friends gave me the link to install it long time ago, but we are no friends anymore soooo..... i have to find another way... Please help me. I wanna play Discovery.

Conquest
Thank you for extending a great mod already for the game Freelancer. I know you guy's and gals are busy doing other things in life. It means a lot when you give your time back to Freelancer to keep the flame lit.
Cheers

The QUEBECK SYSTEM is missing along with related J/HOLE connections ?

Yeah, good luck finding them, let alone build one.
They were disabled, due to hackers taking advantage of them, or simply destroying them for no reason.
Anyway, they were a nuisance. You had to constantly supply them with materials(a LOT), or see it burn.
There are promises that the bases will be restored, but...
Haven't seen anything yet.

Well, before about week or two, i ve been speaking about this with one of those admins. He told me, from 27.12. (today) it would be this option enabled again.

This option was enabled some months or years ago. But it wont work. Guy from one faction tell me true story. When they hardly make their own base in one sector, two other factions were jeaulous. There was war and that base (which they have been building for long time, spending lots of resources on it) was destroyed. Simply they were jealous, there wasnt any other reason.

So now i think you understand what is this community all about...

hey what's going on with the server forum? i can not access it any longer...