Welcome to the CLEO library (or simply CLEO) - a hugely popular extensible plugin for the Grand Theft Auto games series by Rockstar Games, allowing the use of thousands of unique mods which change or expand the gameplay. There are different versions of CLEO made for GTA III, GTA Vice City and GTA San Andreas. Using CLEO it's possible to add custom scripts written with Sanny Builder or another script editor to the game without starting a new game. Adding and removing a script is as easy as copying and deleting a file in the CLEO folder.

Using CLEO it's possible to add custom scripts written with Sanny Builder or another script editor to the game without starting a new game. Adding and removing a script is as easy as copying and deleting a file in the CLEO folder.

These third-party scripts are entirely user-made and are in no way supported by the developers of this library. While CLEO itself should work in a wide range of game installations, individual scripts are known to have their own compatibility restrictions and can not be guaranteed to work.

CLEO 4 adds 100 useful scripting commands (opcodes) that make possible to work with external files, to change the game memory, to call exe functions with custom parameters and much more.

New opcodes were added in the fourth version to play audio streams, to format strings, to display custom texts on screen without using external text files (.fxt, .gxt). To assess all the achievements and use them in your scripts, install the latest version of the CLEO library.

CLEO plugins are dynamic libraries having the .CLEO extension. At startup, the CLEO library scans the CLEO folder for the files with that extension and tries to load them. If successful, the plugins begin to work and do what they were made for.

Plugins are installed in the same way as scripts.

CLEO 4 is distributed with an auto-installer. To install the library run the installer and follow its instructions.

All plugins are optional, however they may be required by various CLEO scripts.

CLEO 4 for San Andreas needs the BASS.dll v2.4 to be installed. This dll file can be downloaded from the official site of Un4seen Developments Ltd.

CLEO is continually being improved and extended over time. In very rare circumstances, some scripts written for CLEO 3 may not work while using CLEO 4. However, since CLEO 4.3 you are able to enable a 'legacy mode' to increase compatibility with CLEO 3 scripts by naming them with the extension '.cs3'. CLEO 4.3 will load '.cs' and '.cs4' scripts normally and load '.cs3' scripts in CLEO 3 compatibility mode, in which certain small behaviours of the CLEO library will change to achieve better compatibility with that script. However, most CLEO 3 scripts will work without the need for compatibility mode being set as CLEO 4.3 also detects certain necessary CLEO 3 behaviours. Specifically, scripts which use the uninitialized storage data after a SCM function call to work.

The author and original developer of the CLEO library is Seemann.

The developers have no connection with Take 2 Interactive or Rockstar Games and have no liability for any negative consequences caused by using this product or any of the additional products included. Use it at your own risk.

More information about changes in version 4.3 and the CLEO library features can be found in the readme files which are installed along with CLEO and at this topic. 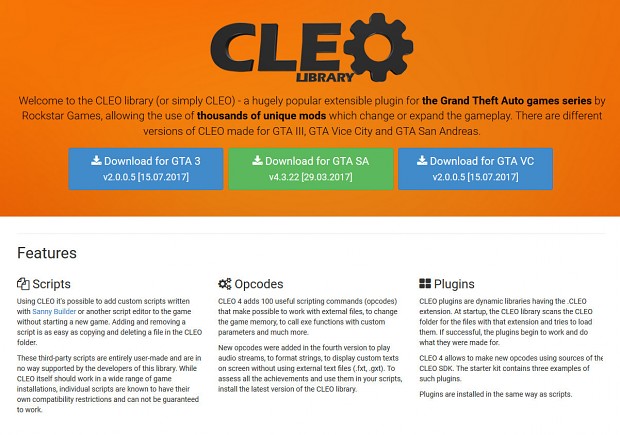