(Warning: mismatch online unless you use original mods folder from _backup, which is 64p) Game/server patched to use Qtracker server list, 128 player/bot support added to game, server, server manager and remote manager, server exploit fixes, and menu music fix for Point of Existence. Credits to Tuia at team-simple.org for BF1942 versions of these that were converted and Canek77 for working mod support. Install by extracting to Battlefield Vietnam folder and replacing original files. Note -- server list freezes when you first enter but it should allow you to update after. Update: Experimental 128p Linux server using Qtracker added, but untested. Gamespy stat server address changed to Qtracker address. Server exploit fixes details are in description, for one with them fixes check out kersurk's Linux server security patch. Any further problems will require someone like Tuia to solve.

Any issues with music or radio commands not playing are solved if you run the game in Windows NT compatibility mode.

Guide for running the game at a custom resolution (menu will always be 800 x 600 though): Pcgamingwiki.com 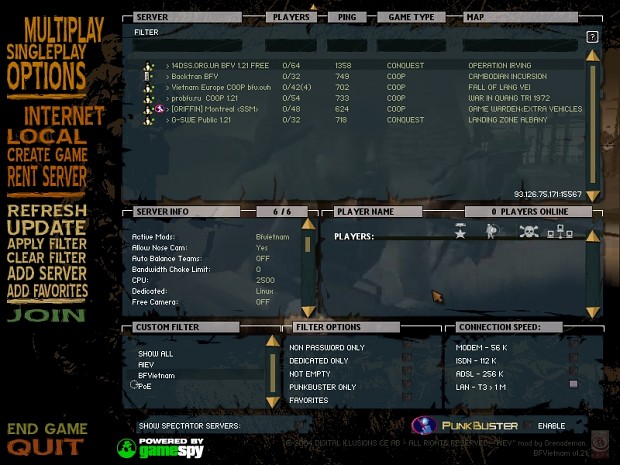 Hey, just did security fixes myself some days ago for Linux server (dynamic only, as I use that one) based on the very same posts. Added to moddb Moddb.com

delete CD-key PLEASE...
the game is dead, but the keys were never cut out

What's the necessary hex values that needed to be changed in BfVietnam.exe file? Because I'm trying to increase the maximum number of players to 256, but it always reverted to 128 even I've already modified both CreateGameMenu and CreateGameMenuPage1 in menu.rfa and increasing the aiSettings.setMaxNBots to 256 in game.rfa's AIdefault.con file.

I believe that one of these is for the singleplayer menu and the other one is for the multiplayer one. The other changes in the file were for the exploit fixes and master and stat server changes.