The "4th Dimension" is a modification for the expansion Forged Alliance for Supreme Commander which adds new content like completely new designed units, explosions and other effects. But this mod does not only add new content, it also changes parts of the game like balancing and gameplay. The goal of this mod is to make SC feel more realistic (as long as it is better for the gameplay) and to improve the balancing and optics of the game. For example nearly all muzzle velocities have been increased, and many units move much slower now. Another big aspect of this mod is the fact, that in 4th Dimension nearly all units have their right to exist, even in later tech levels, while in Supreme Commander you only see very few low tech units on the battlefield. Beside a new veteran system for vanilla Supreme Commander, which lets stronger units count more than weaker units and which gives units bigger buffs, the mod changes also the tarmac sizes and explosion effects. 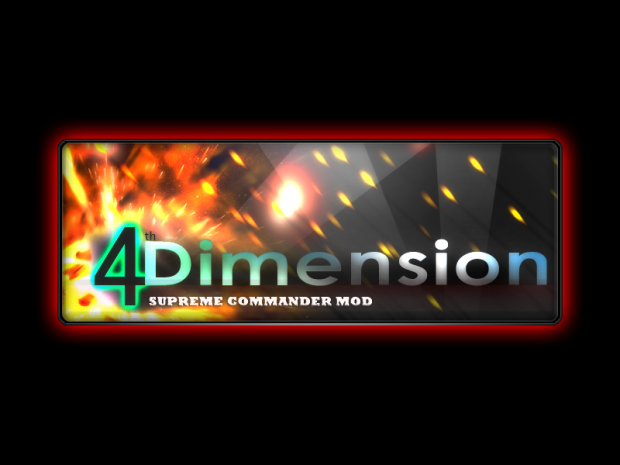 Sweet! Been looking forward to this.

Going to try out 4th Dimension now for the first time. Never downloaded a SupCom mod before.

that mod is the masterpiece of the sc all mods! be fun and get the enjoy XD =D

I have downloaded this mod but unfortunately it will not work. It deletes some of my tool bar when i select factory's and no new things are added. Please could you help as this mod looks fooking epic and i don't know if i need something like black ops icon support 2.0
Many thanks
Aidenlee

Hey i need some help because i have done everything i can to try and get this mod to work but i still cant and i really looked forward to it. PLzzz help

why is it "you can download from mirror just now, try in 5 sec" all time but commercials go fu..ing well all the time.. what a stupid side

thank you so much !

Ok, I believe nobody has a answer, or it can not be answered. I use this mod + Total Mayhem and Black Ops Unleashed. I get rare random crashes. Has somebody may be the same problem. Or is somebody using these mods also together

When I use this mod, the rapid fire attilery of the cybran is gone :( Only the new mod one is buildable

I am using vanilla Supreme Commander. When I start a skirmish game with this mod, the ACU does not spawn, and there is only one mass site. Can I please have some help?

You need Forged Alliance for this mod to do anything.

Is there somewhere the mod for supremcommander without FA just wondering? i want to play the singel-player campaign again just with mods this time.

Guys remember to use Faforever.com
this is a download for the game since gpg lobby went down its a community based lobby and most used for SupCom:FA you can use this mod in the faforever lobby and play with friends or meet new ones

You should add tons of new units and new buildings even.
I love the Cybran mobile rapid artillery the most , the only unit that unpacks in the whole game i just love it
Btw is it just me or i haven't played yet a mod that adds new buildings? New production buildings i mean
Can someone please add Orbital factory like in Planetary Annihilation
Because i don't like that game too much with just 1 faction

Anyhow sorry if i sound too excited but i just like this mod a lot :D

sorry, I've downloaded it and unzipped the folders, now where in supreme do I find the mod? it's not in mod manager, I really want to play this, so please help soon

Does anyone know why units won't show up? It also shows a symbol for when aircraft need fuel. All in all I carried over the files only to not see any new units.