Version 1.1: *removed a trench messing with AI paths* This is a winter themed map with the hunt creatures as the sides in clone wars, featuring Gizor Delso as the hero. In galactic civil wars you can play as the rebels or empire. The hunt creatures present are: Jawa, both tusken classes, ewok, geonosian, gungan, Temple Vanguard (not from hunt), gamorrean guard, acklay and wampa. I've hidden a cool little hideout or two in the map somewhere too. There is a "local" team with no units that shows up red for both teams until it's captured. The map also has a mountain, fallen trees, a village and plenty of snow. (Hence the name "Winter Wonderland"!) Install by unzipping WWA.RAR and place the WWA folder in your "ADDON" folder in your star wars battlefront 2 folder. 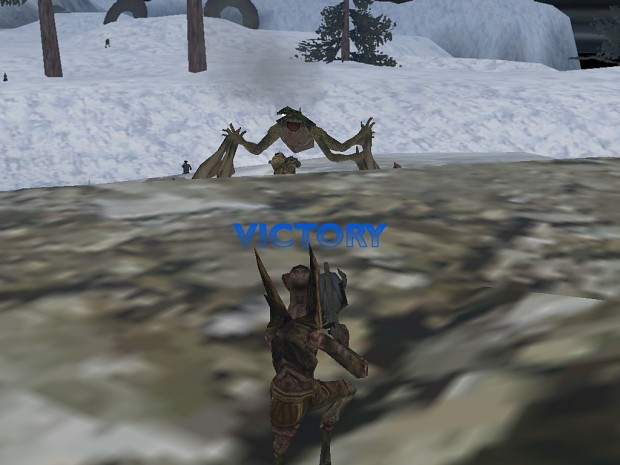 A video I found showing off the map, by Mr. Ciinzu

How do you get the mod into the game? I put WWA into my addon folder but it's not working

Is it possible that you already have a mod with the "WWA" name?

Another showcase of the mod, by Darth Vader:

Some more game play by the same creator but under a different name: Datch. This shows some game play in the galactic civil war mode.

Yet another video, this time by Kryo: