UNREAL TOURNAMENT GOTY Player and Bot Character Skin/Model by Kaal979 Version 2: Fixed VoiceType and other Sounds. But still no way to figure out how to fix/implement any actual running footstep sounds - sneakbots! Description: The favorite Robot character from UT2004 now in over detail for the Original! Basing on Blackcheetahs UT2k4CharsV2 files original skin textures fully reworked. Also improved scaling and collision size and original bot health - 300HPs. I managed to make animated metal glow effects which arent visible on the screenie. These bots are meant to replace the original Boss Xans for the neverending fight against the WeirdCorps and all other hordes of the unspeakable insanity. Lookout for these related files: WeirdCorps Soldier Skins AlienQueen skins Unique Brainbag MonsterSpawn TeamMonsters FragHouse HardCore Weapons pack UT Collector Map Packs All to be found on ModDataBase.com!

Installation:
Put the files in the related UT folders and if
you dont want the many other 2k4 characters
in your bot list leave out the UT2k4Chars INT document!
The other stuffs may be required only if you prefer
the Insanity of the original new Weird Tournament!

Fiction:
After LIANDRI in 2004 heard of the destruction of the Tournament
caused by the undead threat of the Insane and their masters they sent
their new Super-Xans - the Xanitys back in time to restore the order
and wipe out this ongoing fearousity of all free peoples and players.
Now they are the new Xan Force and must stand against them for all times
to prevent their expansion into the Tournaments future which through this
gets into serious questionability with every new weirdation.
This War is far bloodier and cruelsome not only for the UT
participants but even more for the players souls and their sanity.
Only the Xanitys stand strong and bravely fight their fights
until the dawns of a new era enlighten the horizons.

Credits:
Many Thanks to BlackCheetah and EPIC Games - the
original creators of the Mutant Chronicles Universe
and Alcor and H.R.Giger (R.I.P.) for the Alien Dominators
and all other unmentioned lost souls out there.

Future Plans:
A new super bot based on the Nali characters
to support the WeirdCorps with one original
invulnerable team leader!
Maybe someday even a total conversion of UT99
into the Weird-Tournament complete with SP ladder
- destroyed maps and what not else .. . 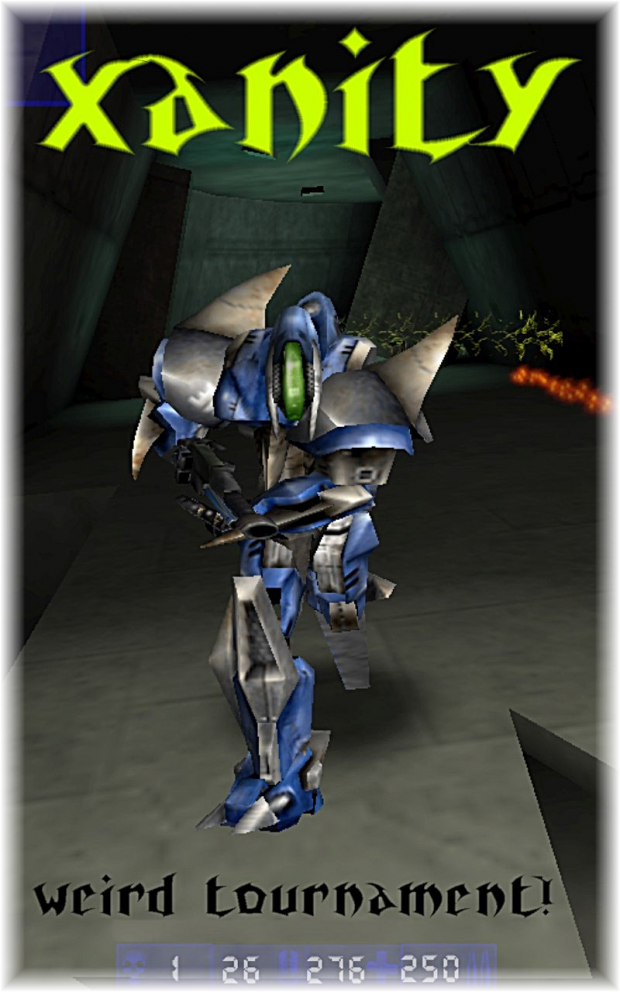 Version 2: Fixed VoiceType and other Sounds.
But still no way to figure out how to fix/implement
any actual running footstep sounds - sneakbots!

Oopsy - not stepsounds okay but
not even swimming animations?!?!