This is a map pack for Star Wars Empire At War: Forces of Corruption which adds 5 new maps based on the Kachiro landings in the Clone Wars. There is also an additional space map called "Battle of the Skies" which will be enjoyable to play with. This is my first ever uploaded map pack so constructive criticism is welcome in order for me to further improve it for a future 1.1 release. I have tested the playability and I think it is pretty good right now, but I know you guys will know better :). I was not able to get an image of the maps in-game because my Windows computer died so I will update the image after December (since I am going to get another windows computer then). This map pack is best played with Clone Wars Era Mods for realism. Thanks, From BountyHead 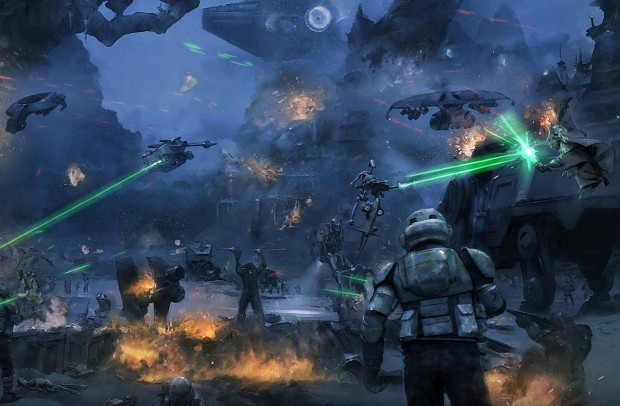 The landings map has one major issue and a couple of minor ones. First the second faction has no mining facilities and so are pushovers. The minor issues entails the walls around the landing pad making units get stuck. Also the two lower bunkers are unusable. Other than that the layout is nice and if the AI had money it would be a good fortress style map.

Since when do STAPs shoot green lasers!?

its not his picture

Just so you know, if i play a in a space battle i prefer not to get blown up by a bunch of ships that spawn next to me.