This is a Star Wars: Battlefront II custom map based on the location where the second level from "Star Wars: Dark Forces" took place. Tak Base is a minor Rebel Alliance base on the planet Talay, where the Empire carried out the first demonstration of the Dark Trooper Project with devastating results. Available modes are: Team Deathmatch, 2-Flag CTF, Hunt, Campaign, Domination, and Survival. In Team Deathmatch and 2-Flag CTF, defend the base as the Rebel Alliance or go the offense as the Galactic Empire. In Hunt, recreate the Rebel massacre at Tak Base, and play as the Empire's Phase II Dark Troopers or the Rebel Alliance. Campaign attempts to recreate the objectives of the second level from "Star Wars: Dark Forces"; plays as Kyle Katarn, and investigate the aftermath of the Rebel massacre. In Domination, permanently capture all the enemy's command posts to win. And in Survival, defend your team's command post and survive until all enemy forces are eliminated.

This is a map based on the location where the second level from "Star Wars: Dark Forces" took place.

Read more about it here: Starwars.wikia.com

This map is only playable on the Galactic Civil war era. All sides/units are custom.

* Hunt
- Phase 2 Dark Troopers versus Rebels
- This mode attempts to recreate the Rebel massacre at Tak Base.

* Campaign
- Play as Kyle Katarn, and investigate the aftermath of the Rebel massacre.
- This mode attempts to recreate the objectives of the second level from "Star Wars: Dark Forces."

* Survival
- Imperial Special Forces versus Rebels
- Defend your team's command post and survive until all enemy forces are eliminated.

Extract the TTB folder from the archive into your Star Wars Battlefront II\GameData\addon folder. Delete it to uninstall. 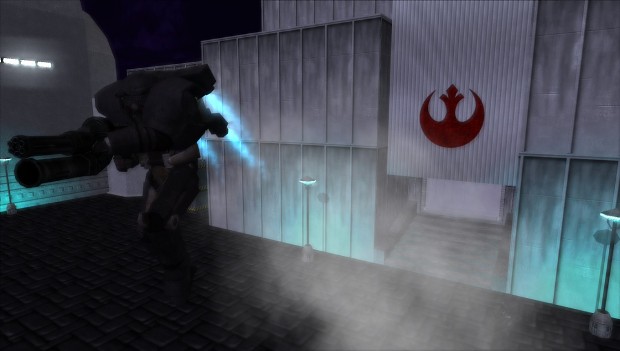 At last, another quality mod update!

WOOOOOOOOW!!!!!!!!! CONGRATULATIONS Is the best level of Dark Forces

My second fav map after DeathWatch Bunker 3.0! <3 Can you add voices for the objective like in your previous map?

Keep up the great work :D

I chose to not add campaign VOs because I was trying to stay true to the original Dark Forces mission (the third objective does have a voice over, though. ;) )

Also, the campaign here is more like a stealth/problem-solving mission, so they wouldn't be really necessary, in my opinion. But for sure for the next campaign!

Really great mod, just one problem can you remove the unlimited reinforcements for the rebels on conquest please

It's actually not Conquest but rather a new mode called Domination. You can only play as the Empire, and the only way to win is to capture all of the Rebel command posts (which they cannot capture back). The Rebels having unlimited reinforcements is part of that challenge. Also, the Empire's limited reinforcement points only apply to human players, so your AI teammates won't have an affect on it. Hope this helps you.

Very good map, it is thanks to people like you that you relive the game and mod!
For others downloaded this map it is huge see my video:https://www.youtube.com/watch?v=ol4zp6xKjL8

I knew tracking you as a creator was a good idea :) This sounds amazing.

This mod is extremely laggy on my computer, I really wanna play it though, any advice?

You can try setting lighting on medium or low. If you still get a low frame rate, then you can try lowering your screen resolution. Hope this helps.

the campaign crashes and exits the game upon loading. any solutions?

This is amazing. After recently completing dark forces I can appreciate the near perfect recreation. Also that hunt having dark troopers vs the rebels is also awesome, showing the slaughter of the base first hand. One question though, are there any secrets in the campaign besides extra lives? I dont wanna spend an entire day pressing activate on everything.

Thanks! All I can say that there is a secret room somewhere, but it's nothing too special.

Is this map not playable in multiplayer? I keep getting "#1/#2 in spawn queue" and not being able to play the map

Got a problem, so have had it installed for a while and it was working well. I could only do campaign, survival, hunt and death match. But it still worked. Now the game crashes anytime I start up anything on the map. I did nothing with the files. It just stopped working. Anyone know whats going on?

I give the mod a solid EXTRA THICC!!!

I loved that in the campaign mode, you can turn Battlefront into a stealth game!