Juno or Juno Beach was one of five sectors of the Allied invasion of German-occupied France in the Normandy landings on 6 June 1944, during the Second World War. The sector spanned from Saint-Aubin, a village just east of the British Gold sector, to Courseulles, just west of the British Sword sector. The Juno landings were judged necessary to provide flanking support to the British drive on Caen from Sword, as well as to capture the German airfield at Carpiquet west of Caen. Taking Juno was the responsibility of the 3rd Canadian Infantry Division and commandos of the Royal Marines, with support from Naval Force J, the Juno contingent of the invasion fleet, including the Royal Canadian Navy (RCN). The beach was defended by two battalions of the German 716th Infantry Division, with elements of the 21st Panzer Division held in reserve near Caen. The invasion plan called for two brigades of the 3rd Canadian Division to land in two subsectors—Mike and Nan—focusing on Courseulles, Bernières 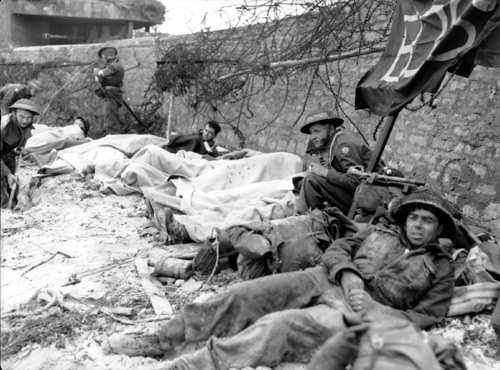