G8A1 from Rainbow Six: Siege. Model from internet, Animations are made by me (zoom animations borrowed from cw_ak12).

I'm just learning to make animation. So please if you know how to make and willing to teach me. Please let me know, i have something to ask 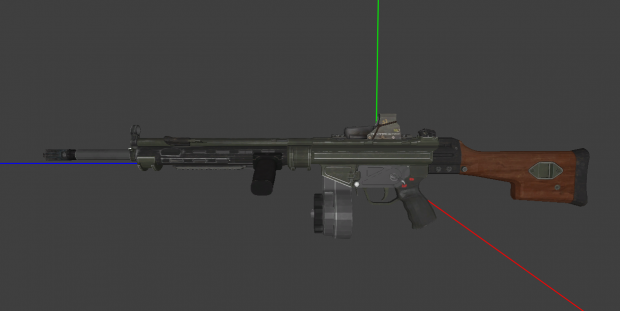 what program do you use

get out of here nazi!
Moddb.com

stop believing the americans are great if they were they wouldnt have been defeated by viet, cuba, isis, pla .....

Russia forward!For the Motherland ,for Putin!

The_voice_of_reason2 was it really necessary to do that? I mean, who cares if the United States gives you an ****** you just had to say why it is not correct to use a swastika as avatar.

Hi Aleksei. I'v not supported Nazism; but about the sign i should tell you my friend this is not anythings that they tell you(broken cross or a sign of worshiping Satan!) it's only an ancient brand called "wheel of sun" a symbol of luck, divinity and spirituality across many nations(Asia & Europe). so tell me my friend: if someone kill people with a pencil therefore pencil should be forbidden?

Hi Marshal, I know the meanings of that symbol. But, correct me if I'm wrong, as far as I know that symbol, rotated slightly to the left, and in a white circle, placed on a red background represents what everyone knows. If so, it would be recommendable to keep it away from the community, just look at the number of people who were offended.

Repeat my dear friend, I'm not a bloody extremist or having any relationship with that Scheißen Waffen SS! They killed babies for fun! they abandon their people when they needed help, than execute them due to guilt of betray! So I know what you'r talking about, but I want you to understand many other (GOOD) nations also do the same when they are hiding from your eyes! Hop we understand each other. be safe.

It's okay, I know you have no connection with Nazism. I never hinted at it, and if I did in any way, I apologize. I understand the message you want to give me and I am happy to understand each other. Have a nice day and be safe you too.

no aleks bro americans gives your sister an ******

August 2042. The Americans are launching a series of tactical nuclear strikes against Russian troops that have reached the German border. Russia responds in a similar way, two American brigades and the Rammstein base were burned in an atomic flame.
Germany declares its withdrawal from the war and leaves the NATO bloc. Its example is followed by Italy, Austria, Denmark, Croatia and Spain.
American, Belgian, French and British units are rolling back to the west and trying to gain a foothold on the Bremen-Dormund-Frankfurt-Zurich line.
Saudi Arabia has capitulated, and American troops are hastily leaving the Middle East.

September 2042. Chinese and Korean landings on the islands of Okinawa and Kyushu. The Japanese put everyone they can under the gun. The American fleet, transferred from the Atlantic, is trying to break the blockade of the Japanese islands.
A joint Russian-Chinese operation to liberate Chukotka begins. Americans and Canadians are being hastily evacuated to Alaska.
The US economy has begun to decline after months of growth, big business no longer believes in American power, and social tensions are growing.
Texas is holding a referendum on independence.

October 1-10, 2042. Russian and Belarusian troops broke through the defense of the NATO troops. The Netherlands and Belgium capitulated. The British began to evacuate to the islands. The American and French units hastily retreated to Paris. Russian troops do not meet serious resistance on their way.

October 11. The Japanese do not want to give up a single meter of land to the Koreans and Chinese, they are helped by the remaining American troops. Greece announces its surrender.
The US is hastily leaving the Middle East and Europe.
In the Middle East and Asia, people are experiencing the consequences of a limited nuclear war.

October 12-14, 2042. Russia, China and Korea, seeing the deteriorating situation inside the United States, are discussing further plans for North America. It was decided to carry out a military intervention, take control of the American nuclear arsenal and divide the country into ten parts.

October 16, 2042. The United States launches its missiles. The targets are Korea, China, Russia, the DPRK, Iran, Turkey and dozens of other states. Russian and Chinese warheads are raining down on the Americans. Their hit caused the eruption of a supervolcano in Yellowstone and the strongest earthquake in California. The East and west coasts of the United States are covered by a tsunami.
In addition to nuclear weapons, chemical and biological weapons are actively used.

The exchange of nuclear strikes in one day claimed the lives of three hundred million people, more than six billion will die in the next three years. From famine, epidemics, the effects of radiation, cold snap caused by a volcanic winter.
In Russia, up to 30 million people died from the initial strike.
Novosibirsk, thanks to the Grid system, survived, not a single warhead fell on its territory.
Krasnoyarsk partially survived.
Other major cities on the territory of the Russian Federation were subjected to various degrees of destruction.
Nuclear power plants and large chemical enterprises were destroyed, and the environment was heavily polluted with long-lived isotopes.

December 2, 2042. Russian troops are trying to break out of Europe back to their homeland, but nothing good awaits them there. Destruction, radiation, sometimes complete anarchy and epidemics. The attempts of the authorities to restore order were not crowned with success.

December 16, 2042. Due to the collapse and weakening of power structures in the western part of the country, Novosibirsk declares itself the new capital of Russia, numerous refugees are rushing there.

January 1, 2043. The Novosibirsk government has established a strong connection with the eastern part of the country. Measures are being taken to restore the destroyed infrastructure and provide humanitarian assistance to the population.
A series of purges is taking place in the newly formed government, several thousand officials of various ranks and their family members have been shot. The power completely passes into the hands of the military and representatives of the FSB.
In the European part of the country, most of the population died from hunger, cold, radiation sickness and various epidemics caused by the use of biological weapons. Centralized power has finally disappeared, people are left to themselves.

January 15, 2043. A plane with a representative of the former world business elite arrives from Switzerland to Novosibirsk. It is not known what he talked about with the Russian leadership, there are rumors that two corpses were taken out of the administration building through the back door.

January 17, 2043. It is reported on the radio that Switzerland and the United Kingdom have been subjected to a series of nuclear missile strikes. Zurich, Bern, Geneva, Birmingham and dozens of other cities were destroyed.

January 19-30, 2043. In the British Isles, an outbreak of an unknown virus resembling parainfluenza, the mortality rate is more than 92%.

January-February 2042. The battle of the Nansei Archipelago. The American and Japanese fleets were completely defeated, the Chinese also suffered serious losses, but their Navies remained combat-ready. For the United States, this defeat turned out to be catastrophic, the Americans begin a hasty evacuation of their units from the Korean Peninsula and Japan.
The DPRK, with the support of the Chinese and Russians, goes on the offensive and captures South Korea over the next two weeks.
Israel has used nuclear weapons against Iran, Syria, Egypt and Turkey, which provoked Arab uprisings inside itself. Iran is striking back. Jerusalem and Tel Aviv were destroyed. The troops of the Arabs, Persians and Turks occupy Israel.
The Americans and Canadians are retreating from Primorye.
The United States and Saudi Arabia manage to move deep into Iraq, American aviation dominates the air.

March 2042. Tired of endless provocations on the Polish border, Russia is launching an offensive in Europe. Heavy fighting in Poland, Russian units are opposed by the forces of a united Europe and the United States. Despite the losses and defeats, the American economy is showing good growth indicators.
Kem Jong-un proclaimed the creation of a united Korea. The Chinese Navy and the remnants of the Russian Pacific Fleet established a complete blockade of the Japanese islands, where some of the American troops who did not have time to evacuate remained.
The American-Canadian units leave Kamchatka, but they do not leave Chukotka.
Turkey is knocking the Greeks out of Cyprus, the war in the Mediterranean is gaining momentum.

April-May 2042. Warsaw and Krakow are constantly changing hands, the Poles are fighting with special tenacity, the Americans, the British, the Germans and the French show much less heroism.
The fighting in the Iraqi deserts is dragging on. Neither side can achieve decisive success. Americans and Saudis outnumber Iranians and Turks technologically, and Turks and Iranians outnumber them.
Japan and the American garrisons on its territory refuse to capitulate to the proposal.
There is a humanitarian catastrophe and a civil war in Pakistan. The situation in Central Asia is normalizing.
Russia is still unable to squeeze the Americans out of Chukotka.
In the west of Ukraine and in the Baltic States, gangs of nationalists are operating, carrying out attacks on the Russian military and terrorizing their own compatriots.

June-July 2042. Russia captures Norway, Hungary, Slovakia, part of the Czech Republic, Vroslav and Poznan are taken. The belligerents suffered significant losses. There is a lull on the European front.
Saudi Arabia is secretly negotiating a truce with Turkey, Egypt and Iran.
The Americans are fighting on the outskirts of Baghdad.
Turkey captures the island of Crete and advances on Thessaloniki.
Attempts to dislodge the US-Canadian troops from Chukotka turned out to be a failure, Russia is asking China to provide assistance. China is preparing to land on the Japanese islands.

kindly GOD Saves us all mate.

Is that so; tell me why they didn't save Nagasaki's children when nuclear radiation vaporizing their body to burnt bones alive, or while burning dozens with Napalm or when kids birth with no eyes due to Agent Orange in Vietnam? tell me about ISIS, Who created them? your beloved one has a big sense of humor, aren't ya think? So be fun.

Relax.Nationalists and fanatics are the same in all countries.

Not Nationalism but Racism and thirst for endless power Should be blamable. killing innocent have no honor to proud any man.
God bless ya mate. be safe.

look at the atrocities of the Nazis .In this video, it's fashionable to look at how they made soap from people.Especially impressive are the severed children's heads in the basins
M.ok.ru

yea they are trash **** russians

expectable, you should have gone to kurdistan as volunteer to save as all.
Here is you hat Whale.to

It is a pity that such a good addon is stained with such a sad discussion with a Multi-account and a User who was judged badly.
Anyway, Thanks for the gun mate. You really did a good job!

No problem mate.
i got so many guns i want to pull out, but with this situation i think it is not the right time.

Great gun but there's only one problem; This gun have no sound

Oh boy I sure do love this mod. I hope nobody starts a random irrelevant political war in the comments