This small addon is intended for Doom3 BFG Edition with BFA mod. Damn, UAC, what's the point of carrying a full 6 tube belt-fed battery-powered microgun that is far less efficient than any LMG you could found back in the XXI century? Then I remembered how much I enjoyed Sgt MkIV's chaingun in his Brutal Doom series. Sure, it is hell of a powerful weapon compared to vanilla doom1-2 version, but I couln't stop to grin while endlessly turning every moving target onto a pile of meat, my brain washed by frantic screen shake effetcs and that continuous BRRR sound. Now THAT is how a chaingun is supposed to be fun to use in a video game! So I made some tweaks to D3's chaingun, somewhat inspired by that real-life XM556 thing. RoF is about 1800 rpm aka 30shots/sec, cal.30 bullet has roughtly the velocity of 7.62 NATO, you can feed it with up to 600 rnd in a single belt, (each ammo pickup gives you 200 rnd). DAM decreased to 10, but DPS is 300! Reload much longer, few other adjusts. See readme. 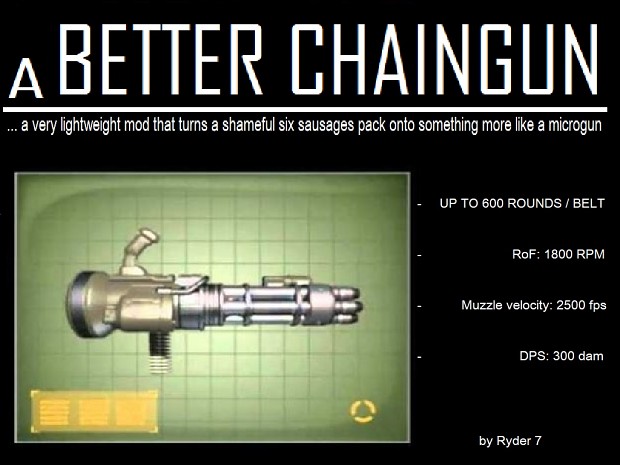