Portal 2: Infinity will be a fully voiced single player campaign, which takes place a few years after the end of portal 1. When the few escaping employees created Aperture Science West, a facility dedicated to the glory of what aperture science once was, The law to keep AI control of the facility to a minimum had been kept very strict. But when the Portal Transit, the system that links together the facility, is hacked while you're testing; it's up to you to find out what's going on.

A summery of what's been going on recently, also with revealing some new characters.

Well things are back to great with development. With things being finished, and stuff being learned. So much so I forgot to introduce to Very important people who've started helping me out. Zucky1011 is a talented voice actor who's been helping out with the personality core voices, so give him a round of applause, and some steam game gifts.

Alastor is an extremely talented mapper and texture artist that joined me the other day, and has already started contributing to the mod. So give him a thumbs up and a pat on the back, because he's the one helping me make sure that this mod will be as long and polished as possible.

Below I have the 3 of the 4 personality cores that will be appearing in the mod, hope you like them. 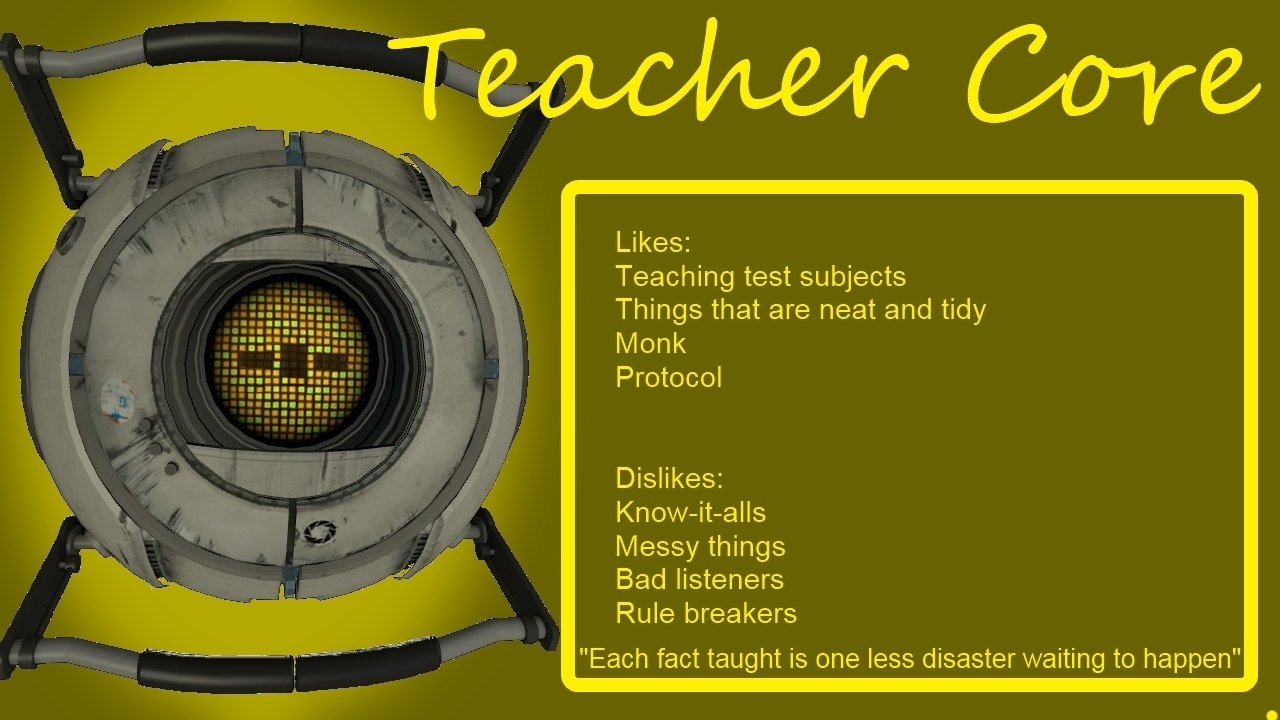 The teacher core is a responsible care taker of the beginner test zones, he acts like a mentor to the creativity core, and will sometimes nag the two cores when he finds them breaking protocol 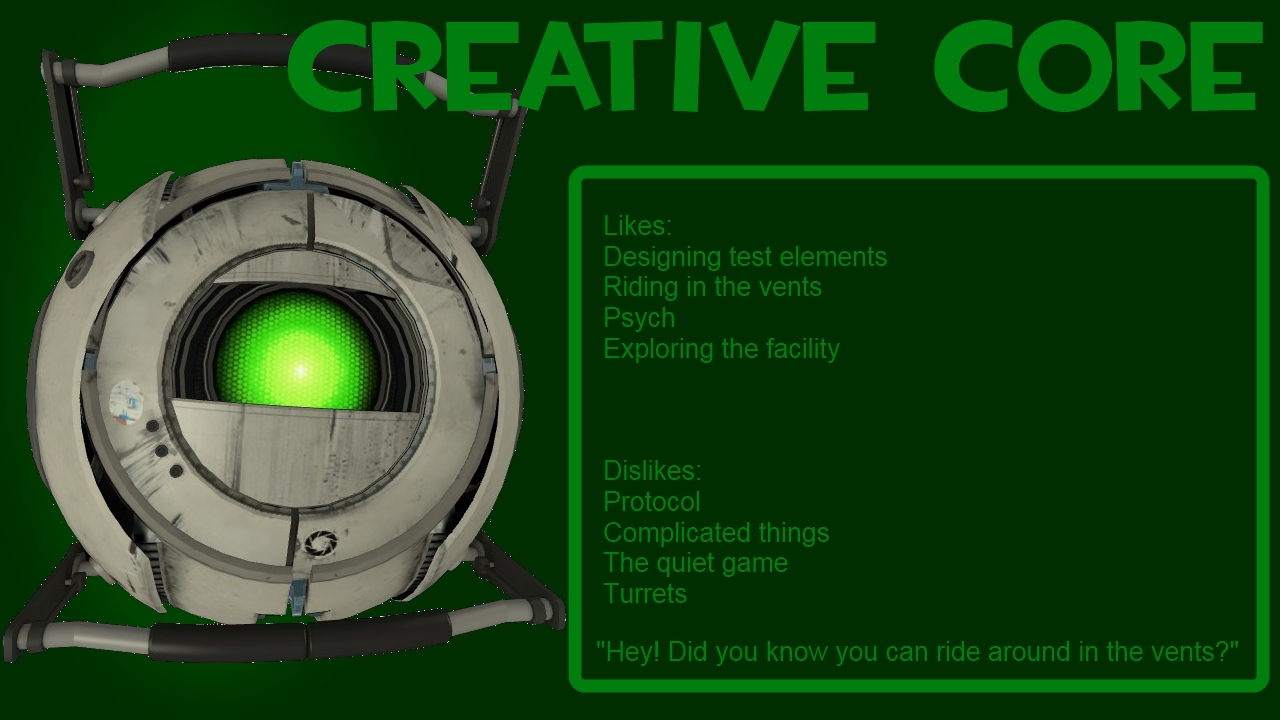 The creative core is the child of the 3, all ways finding ways to make games out of test supplies. He often slacks off when not being watched, but does enjoy making logic based tests, and inventing test elements. 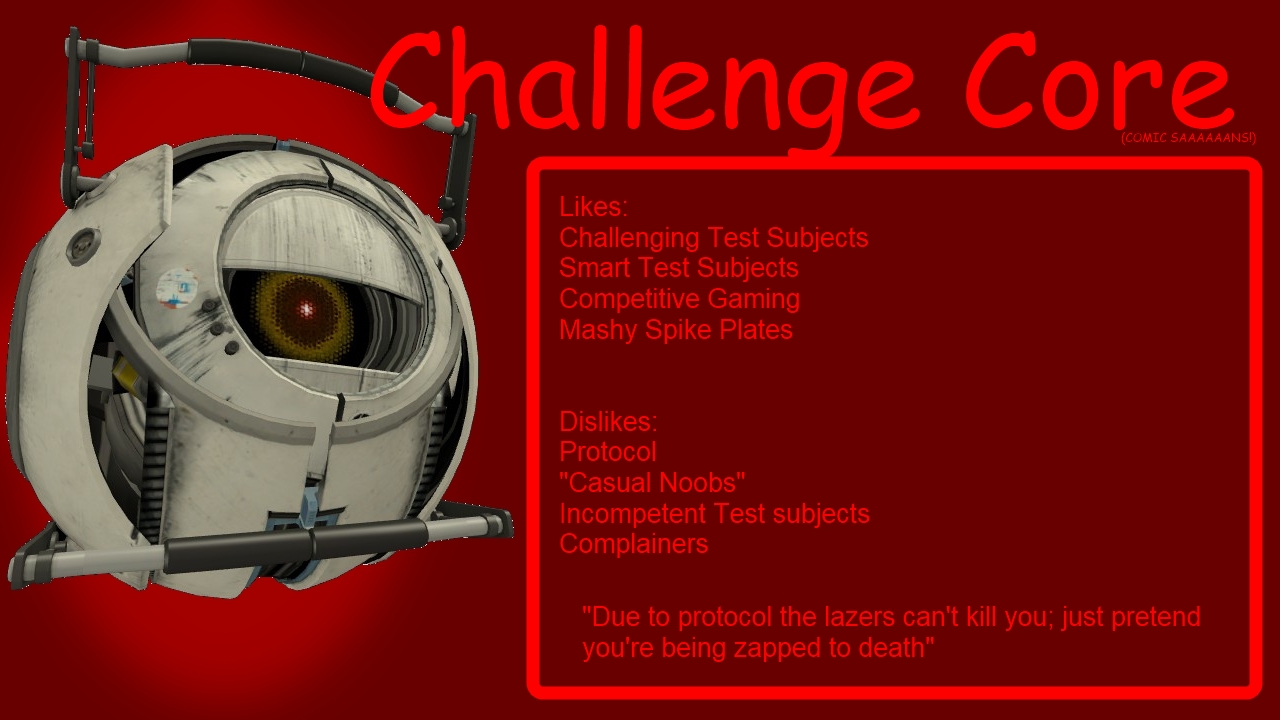 The challenge core is a challenge loving test maker that makes the most elaborate chambers to challenge even the most talented subjects. Often annoyed by the teacher core, he finds himself breaking protocol much more then the creative core.

Hmm... what voice does the Creative Core need? I might be able to recommend somebody.

I'm am interested how you will make the cores talk so that there are subtitles, because right now it's hard coded to make a core talk, I wouldn't even know where to begin on animating him. Good luck though!

Based on the pictures, it looks like they've already gotten to animating them.

No voice actors for your other two cores? Or maybe even that mysterious 4th core you mentioned?
Well if you ever find yourself hard pressed to find a voice I'd volunteer, tracking this mod regardless.