Naruto: Ninja Densetsu is an interactive mod based on Naruto series. The project itself is aiming to be as close to original concepts of Masashi Kishimoto as it is possible. N:ND focuses on all aspects of manga and anime, so that the game will actually feel like the series. Thanks to amazing Unreal Engine 3 we hope to deliver unseen level of details to the game.

For our first news, I’d like you to become more familiar with the project and the story behind it. As for the media update, I present you TommyB's work - uncompleted version of Great Naruto Bridge!

Hello, all Naruto: Ninja Densetsu fans out there!!

We’d like to give a warm welcome to the SUMMER HOLIDAYS with our very first news update!
But wait! That’s not all! From now on we also plan on releasing news at least once a month (or maybe more often)!

First of all, this time, our news update will focus on the history of N:ND. I’d like you to become more familiar with the project and the story behind it. ; ]

Those expecting some media update, fear not! I also plan to satisfy you with some eyecandies!

So, let’s get straight to the business, shall we?

The beginning of the Naruto: Ninja Densetsu is shrouded with mystery. Not even the oldest team members can remember how it exactly began. However, most of my clues lead to one person. IrishBlood. Let me first take us back, to the very beginning...

It all started few years ago, when the first fansubbed Naruto episodes were released. People hanging on different forums oriented on modding DragonBall, really got into it. Especially with the great Zabuza & Haku Arc. So it was just a matter of time before first Naruto models were done and of course with models came idea of setting up a team and starting a Naruto based mod.

As I was digging through our ancient manuscripts, I’ve learned that the original ‘founder’ was either GotenSon or IrishBlood. My interviews with our older team members put some light on that and it is believed that IrishBlood was first ‘team leader’. Also maybe ‘founder’ is a word too big to describe him, but, in the end, he was the one, who gathered all those people and started a mod. In a way, he was the source of a team, that later set up bases for Naruto: Ninja Desetsu.

Original team, which worked on that mod, consisted of few developers: IrishBlood, GotenSon, Yondaime, JMB, HntrLuc and Alex. Some of my sources also point to Djang, Element and broli. While gathering information I’ve also found out about an interesting person, who was there before the mod officially start! Roekee was that person - the very first forum moderator! And guess what? He is still with us!

The first game concepts weren’t the same as now. Thanks to Alex, I’ve learned that: “(…) it was a BFP style Quake 3 mod (…)”. The game was simple and, as Yondaime explained, it was all was on something like: "HEY WOULDN’T IT BE LIKE ... COOL IF WE LIKE HAD 200 BUNSHINS AND THEY'D BEAT THE SHIT OUT OF OROCHIMARU". In the beginning that mod didn’t really have too much, to actually any, direction or unique appeal. Alex summed that period as: "ZOMG WEER MACKIN NAURTO MOD!!!".

As the dev team grew and progress was made, there were many ideas and discussions about, which direction mod should take. Eventually the team in conflict divided. IrishBlood left and took most of the new developers with him.

After that, lasting team members had equal rights. With newly discovered freedom together they brainstormed many ideas. Those, which were great, gave mod the direction it needed. It was decided to try going towards more classic representation of the anime. It was also when N:ND was given it’s name. Before the split it was nameless and the current name idea was a joke! Yondaime explained me that in more detail: “We didn't have a name yet and everyone referred to us, as "Naruto mod". I didn't like that and suggest taking a name "something like Naruto - Ninja Densetsu which sounds more suitable for a game based on ninjas". I'm not sure if it was due to the others being to lazy to make something up themselves or if they really liked it, but surprisingly everyone said we should just use that and well, now it's written in that header thingy”.

When I asked Yondaime what was the base for N:ND, he said: “It was a Quake 3 mod pretty much right away” and explained that Quake 3 engine was mostly the reason why all those amazing people joined their team. They all had experience with it and there was a huge community surrounding it. But, even as ‘great’ that engine was, there were many code related problems. After a while though, the engine’s source code was released and many gameplay ideas were implemented.

In the end, base game concepts evolved into, what we know as, the last Quake 3 standalone Naruto: Ninja Densetsu. So once mod, became a standalone game. Game, that was on a great way and not far from the first, historical release. Almost all character were done, animations were done, levels could be finished any time and the art side was near being complete. Unfortunately the coding side was a nightmare… Dev team was changing when it needed stability. Developers lost skilled coders when the animator was around, and lost animator when the coder was around. Therefore a problem occurred... With no dedicated, capable coder and animator at the same time, dark clouds shrouded N:ND’s future…

Those dark times we all remember as a hiatus. Dreadful word, which questioned further existence of Naruto: Ninja Densetsu…

The team just wanted to get the Quake 3 version done and dusted, hoping someone would come along and help with the code side. So the team was waiting… but as that didn't happen and nothing else seemed to be coming up, a new hope appeared.

Alex said that: “It was originally Lennard, who suggested we move to the Unreal Engine”, but by that time dev team had no intention of doing that....

As time passed by Alex brought up dusted engine switch idea back to light. This time, with Unreal Tournament 3 close to release, dev team agreed, that they would never get anywhere with Q3 and that Unreal Engine would be the better, easier option. However, more user friendly engine wasn’t the only reason to switch. Devs also hoped that more people would be willing to work on it…

And so people did...


And that’s it! The brief history of Naruto: Ninja Densetsu! I had a lot of fun creating it and I trust you had at least as much fun reading it!

Now some media for those with hungry eyes!
For this update, as you might have read in the above text, we’ll show you some of TommyB’s work. This map started as his application test and evolved greatly through time. So, I present you his W.I.P. map of incomplete The Great Naruto Bridge! 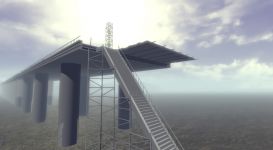 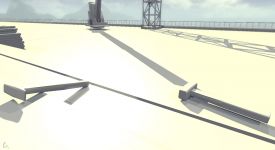 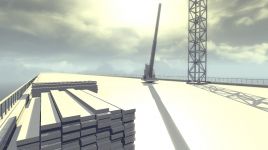 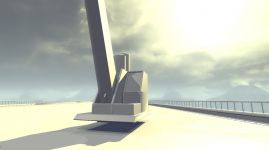 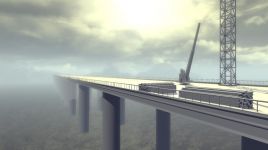 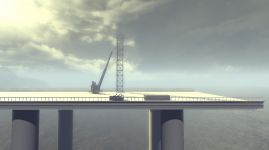 We currently lack skilled and dedicated animator and still-object/inorganic modeler. So those spots are free for applications! We welcome all people with talent, time and dedication to the project. Think you fall under those criteria? Register on our forums and post here your application!


Sooo… this wraps the news and media update for today. I hope you all liked what I've prepared for you!

See you next time!
~Ravven

I like what I see there, I'm tracking :P