They want to rule the world and annihilate the human race! In a devastated land from the Kepler Planet, human beings are captured by a mutant army and are simply discarded or used in genetic experiences. This is the worldâ€™s new reality! Are you prepared for the holocaust? As a Polar Soldier, you should join to the human beings against the Dumon enemy army, which prepares its strength to dominate and extinguish the human beings from the Universe.

Polar and Dumon Soldier by Rodrigo Banzato You have a total of 8 new characters with 44 new parts for Polar soldiers, the best soldiers of the Universe. You also can play with the Dumon soldiers, the mutants of the Holocaust. 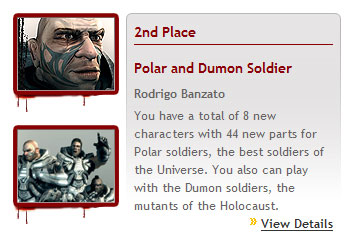