Follow the adventures of Milena and her psychic teddy bear totem in a world where psychics and normal humans coexist. In this adventure she enters into a mysterious realm inside a painting and must try to find her way back out into the real world amidst the labyrinth of intrigues and conspiracies inside the painting world.

Our main protagonist have went through many iterations to arrive at where she is, here is a look at some of the rejected ones along the way.

Our main character, Milena Desmaris, was one of the first characters we ever designed and went through many iterations to arrive at where she is. In the beginning we started with a more maximalist idea of what she should be and eventually settled on a more minimalist one that we have now where we don't try to make her look too exotic (a la Final Fantasy) and value function over style. That said, we try to insert some subtle hints of her more-than-ordinary elements into small elements such as her bright fiery hair and bright blue eyes.

Right off the bat we wanted to try and make Milena as a somewhat troubled and reserved character with some internal issues that prevented her from enjoying life like any other girl. In our initial iteration she was almost an albino with piercing red eyes and platinum hair but in the end we've decided that that was too drastic, We also started her off with long black hair that are pigtailed and her original name was "Bernadette" whom we affectionately call "Bernie" for short. She also had a lot more wilder style that mirrors more of the harajuku temperament among japanese fashion daredevils. 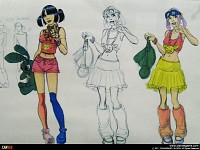 We eventually decided that that look was too distracting and doesn't fit with the darker tone of the mod (which got increasingly prominent as development progresses). The first concept artist to work on Milena, Nadia Mogilev, who did this piece, was relegated to design Borden which eventually became his current iteration today. It is worth noting that aside from Taychin Dunnvatanachit (Project Lead) everyone else who worked on her concept art are all women so she truly is something that they helped create.

Eventually we drifted more towards an easily readable "school girl" look with short curled hair with the help of Brianna Soo Houng Noh who was a fashion student studying at the university some of us were at. She brought in some new ideas that made it to her final iteration although Milena was initially a lot more scrawny in her build, in an exaggerated fashion illustration kind of way. Her named also changed from "Bernadette" to "Malena", essentially "Milena" with a european spelling but we eventually did not see the need to keep it that way. We used Saoirse Ronan as our initial reference to base her off of. There were some concerns that this "school girl" look would be too generic but Taychin Dunnvatanachit insisted that sometimes less is better, a notion that he would go onto apply to a lot of the design elements in the mod. 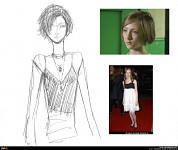 There is a massive amount of time and manpower that went into the development of Milena, her initial background and concept were developed by Mike Pelletier, who are sadly no longer with us due to some differences. With his initial ideas we began to drift more towards a design with reddish hair using his inspiration from the band Paramore.

It is here when Linda Chen entered the fray and designed what would be the culmination of all our previous designs into what Milena currently is today. Her first draft from Linda was more of a blonde curly-haired girl more along the lines of our reference from Saoirse with a very doll-looking face but as we wanted the painting world and the real world to contrast better we moved her more towards photorealism and that the doll look was no longer viable. 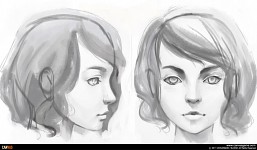 We based the new her off of Natalie Dormer and red hair was decided on to give her more character and shipped the concept off after some tweaks to our modeler Dan Kershaw which is how she arrives in her current state today. Even now, she is still being tweaked and constantly evolving in small but significant ways. 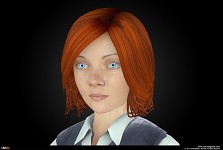 All in all she took a lot longer than we expected to fully flesh out but we have learned to mitigate the pipeline a lot more and our design process is now more concrete and efficient even with Source! 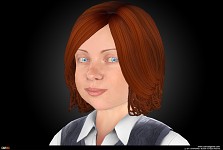 milena is a pretty name