Zombies are Awesome. But who wants to be stuck in a building? Unlocking one room at a time? The ArmA 2 engine provides 1000km2 terrains in which to explore. My missions utilize this to create an epic zombie experience. Enjoy!

The next version of zombies. Fixes for performance, new sounds, large hordes (like in the walking dead finale), and the ability to build bases by collecting objects across the world. .95 takes free roam zombies to the next level. 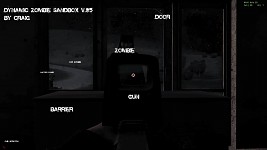 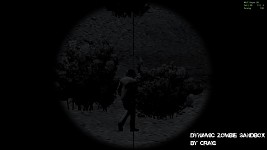 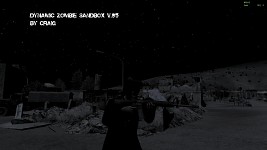 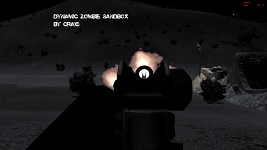 Today I have another slice of the zombie pie to deliver. Zombie sounds have been completely redone, zombies should never stop spawning now. I added more parameters. R3F logistics were added. NVGs and more. 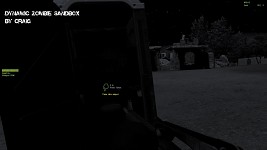 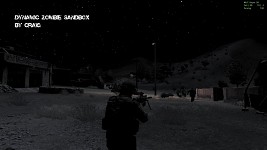 Requires patch 1.60 of ArmA 2 Combined Operations. No other mods/addons required, works with ACE

Requires patch 1.60 of ArmA 2 Operation Arrowhead . No other mods/addons required

- This version works now, weapons are found in boxes in towns, enable ammo box parameter
Requires patch 1.10 of ArmA 2 or ArmA 2 Free. No other mods/addons required

All 3 Versions in one .RAR:

SRU team, thanks for the ideas and the testing - Sruclan.net
Deth - Helped a lot with sounds and testing
Tonic - Told me to abandon construction, and made the new Loading screen! thanks :D
VVC team
Loyal players
Everyone who hosts the mission
Celery for making the zombies!!

Make a full game of this and its GOTY hands down bro :DDD

Ces't super cool! Yeah its really damn cool i had to say it in another language. Thanks bobtom/Craig!

Mission is really great and even day time gave me some good scares :D

So much fun :D

awww, not using a half life 2? bummer, hardly anyone's gonna be able to play this. :-(

Well Arma 2 is F2P and this mod works perfectly now that a new version is out.

This has no addons so it works.

If a steam deal pops up for Arma 2 & Operation Arrowhead we should encourage everyone we know who likes zombie games to get it, steam does some good deals from time to time! After living off half life 2 zombies mods for years I gotta say this is a nice bit of fresh air, something different and it's great. Trouble with hl2 is the map size so the way it plays out is very level based whereas this is just wtf this place is huge o_O

With the difficulty up and map marker off its almost impossible to figure out where you are, once you do and once you find a few other people it's such a relief! I was playing for like 20 minutes, no guns running around in the darkness and out of nowhere I heard a convoy in the distance, luckily was able to cut them off and join the bus, was such an epic moment :D

There is a 50% off all BI games going on right now actually, but not on steam. You could still tell people via the Steam forums I'm sure. Check out the BI store, even the DLC is 50% off. :)

ArmA 2 F2P (A2F, ArmA 2 Free, whatever) doesn't support mod, but this is technically a mission, allowing it to be used in A2F.

how the hell can you build/move stuff is there a special key or something for this ? if someone can tell me i would be very thankfull
by the way this mod is awesome

i would also like to know this?? cant get how to move objects on this mission is it like tonic wasteland mission ???

I can't even play it. It keeps saying i need cheranrus and the other A@ map. Any help?

Are you playing on ArmA 2 OA? I hate it when one word can ruin the whole version. I'll fix it and re-upload it.

really like it! but how do i change map and other stuff? id dont get that:/

This might be a very stupid question, but is there any way I can save the mission? :(

Like this 'mod.'
I'm gonna have to buy the game I guess to keep it from Crashing to Desktop. :(

Btw, can you put up the parameters/settings for a dedicated server file? Thanks!

This and DayZ combined would be epic.

Daimyo, I'd love to, but I don't have access to servers to allow for persistent gameplay. :/

In a long game with friends, everyone is on the server crash. Only the host plays, and all departures.

This is a great mod but the only thing that bothers me is that weapons are really rare on the map, even if I set the parameter on how much weapons there are on the map to plenty nothing changes.

What version are you using?

"R3F logistics were added, you can now tow vehicles and move objects in vehicles to make yourself a base. Objects spawn randomly in towns like cars do." Only thing I can do is look inside vehicles inventories the majority of the time, very rarely am I able to use all the features of R3F. My friend can move/place things whenever he wants, but he can't tow anything (nobody can). Seems to be completely random who can do what - Is there a easy fix to this? its extremely annoying >_>

Not an easy fix, I've been looking into it for a while, and I can't seem to find the problem. Are you using dedicated or listen server?

I'm having an issue with the OA version. I only have OA installed (complete clean of install. 1.60) No matter what I try I always get the "class Citizen1 no longer exists" error when trying to load up the mission in MP. Any guidance is appreciated.

hey I have the same problem as Yar987 and I downloaded this it did not work can you please post a download link for V90 so I can host it for multiplayer because I had v90 before and worked. Thx

I have a problem with this mission. I extract it with cpbo, and edit description.ext to change defaults so that cars can't spawn only destroyed, as it tends to happen on servers. But after i make the .pbo without any other modifications and try it out, the game freezes...
Arma becomes unresponsive...

Edit: The game became unresponsive because i also toggled another script in description.ext
Nevermind...

Hey guys, this is a great mission that you have made, but i noticed one thing - there is not a good portable light source in Arma2, besides cars. In OA or CO there are weapons with flashlights (g17, for ex.), but no such guns in Arma 2 or Arma 2 Free. Maybe you should create the option to use artificial flashlights (by attaching lights to players). Propably with another parameter in server, cvg_lights or something, if 0 then nothing happens, if 1 then everyone gets NVGs, if 2 then players have an option in scroll menu to toggle flashlight.
Although i have no idea how this would work in multiplayer, here is how i make flashlights in singleplayer - Heypasteit.com

Okay, i made an edited version of this mission.
Although i don't like spamming comments feed, here is a link to Armaholic post (my comment on page 4), there is a image gallery and everything there...
Armaholic.com

Is there still no fix for the moveable objects error? "i cant move objects when i host, if i host on another pc and join it works however either way i cant be host and pick up/move objects?"....

hey i have a problem when i play the multiplayer. the game freezez at the loading mission components part. and how can i make my own wserver

How do you edit the mission? there is only like 3 things i want to put in. one is PMC skins because the PMC look like surrvivers. two is helicopters when i say helicopters i mean for maps like chernarus so you don't drive around for an hour trying to get some were. three pre-built military bases like with apcs and military vehicals and weapons but i want to build these at towns like chernagorsk. I might want to put some other stuff in there but the reason for this is to make it funner its amazing already not saying it sucks but i've been on servers that have this mission edited, like one had different blufor skins and some indipendent skins helicopters and bases. all im asking is how do you edit this mission, please i absolutly love it. i plan on making a dedicated server at the island namalsk. so if you can reply will you i must know how.

Also when i host a server it wont let me move objects. is that a bug or can the host just not move stuff?

I do not know if it's me but when the second loading screen freezes near the finishing point. I sat there for atleast 4 minutes waiting, I was wondering if I got somethin wrong. I installed it into the MPfolder so it should work right? I also was wondering if I can just make a server for myself, by putting it into the reguler missions file

It says that 404 file is missing help!

when i use arma 2 free to play it i cant see vehicle load,i get error starting whit resource r3f_log... is missing

is this going to work with arma 2 operation arrowhead demo on steam?

does this work with arma 2 reinforcement?