And a Curse, and Love, and Betrayal

Geralt is looking for Yennefer (not Triss nor Shani, but his only true love Yennefer, as the story takes place before the events in The Witcher). He comes to a small village and gets two contracts: a young woman wants to remove a curse from her lover who turns into a wolf at day and the chief of the village wants to clean up the local gold mine of all the monsters.

RSS "And a Curse, and Love, and Betrayal" Is Released!

One of the biggest adventures for "The Witcher" has just been released.

We would like to announce that "And a Curse, and Love, and Betrayal", one of the biggest fan-made adventures for "The Witcher", is available for download. It took us almost three years to finish it.

We want to thank everybody who was involved in our project and we wish all players lots of fun!

Download And a Curse, and Love, and Betrayal from ModDB 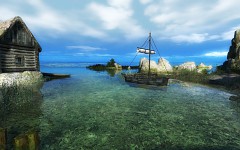 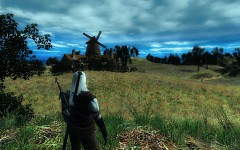 Ha what a coincidence, I'm downloading The Witcher right now for reinstallation and I see this! I'll download this and probably play it when I've finished the 'official' story :)

By the way, is this mod in English or in Polish?

The mod is both in English and in Polish, the game will recognize automatically the proper language version, there's no need to switch anything. If someone's playing Polish version of "The Witcher" he or she will see Polish text, the rest of the world will see English text.

Really nice looking! Congratulations guys! I wish you all the best!

Thanks a lot! Have fun with the adventure.

They made a mod, Which is equal to a game, That is something to be very proud of. Well done to the team, it must have been a hard effort. Very Very well done

I've started playing The Witcher a few weeks ago and still haven't finished it. I can't wait to try this mod. Probably it'd be better if i waited until i finish the main game right?

Yes, definitely finish the main game first. Then, get back to the adventure after some time. The adventure uses some of the locations of Chapter IV, though they are decorated in a different way than in the main game.

No words for this.
The team who made this should join CD Projekt Red, for real.

i'm sure this mod is awesome! i'll download it when i finished the main story, good work!

What garbage. You put it on medium difficulty and even drowners hit your with 35-42HP while you only deal 2-3HP damage. You're dead before you even kill one of them. The creator of this should really test his work first before putting this out there. Its not just drowners who do that either. I'll restart it on easy to see if that makes it a fair fight.

This adventure was tested for several months before release, perhaps more than some commercial games out there. The difficulty is high and we know it. You can't just go out and easily kill monsters (any monster) at the very beginning of the adventure because you will get killed quickly. You will have to use some strategy to kill them. I advise reading Guide To Monsters. Or simply avoid monsters at the beginning :)

is there a walk through? i stuck at 1st main quest from major. He doesnt give me a reward, just tell me 2 come later. -altough its right time as described at notice in front of his house..

There's a FAQ in the download section. You can also check tips on side quests, some of them stop the main quest.

And a Curse, and Love, and Betrayal The Witcher
Related Games