Welcome to the second edition of my blog.

I'll start by answering a question asked by Misha on lost-alpha.com. He asked :

Misha : - ...describe your feelings when you joined the development team for the
first time and was able to try out Lost Alpha. What were your first impressions
of the project?

I wasn't an avid follower of LA before joining and so did not really understand the details or state of the game, I just looked over the new features that were implemented. I was excited that we were able to dig through the source and read the developer comments on some of the features that I had previously implemented in IDA pro. When I first started the game, there was an atmosphere of abandonment, emptiness, more so than the "old stalker" and because I did not follow all the news , I thought that it would feel like the "old stalker" as in the Paradise Lost mod, but got something completely different and personally, I like this atmosphere more. 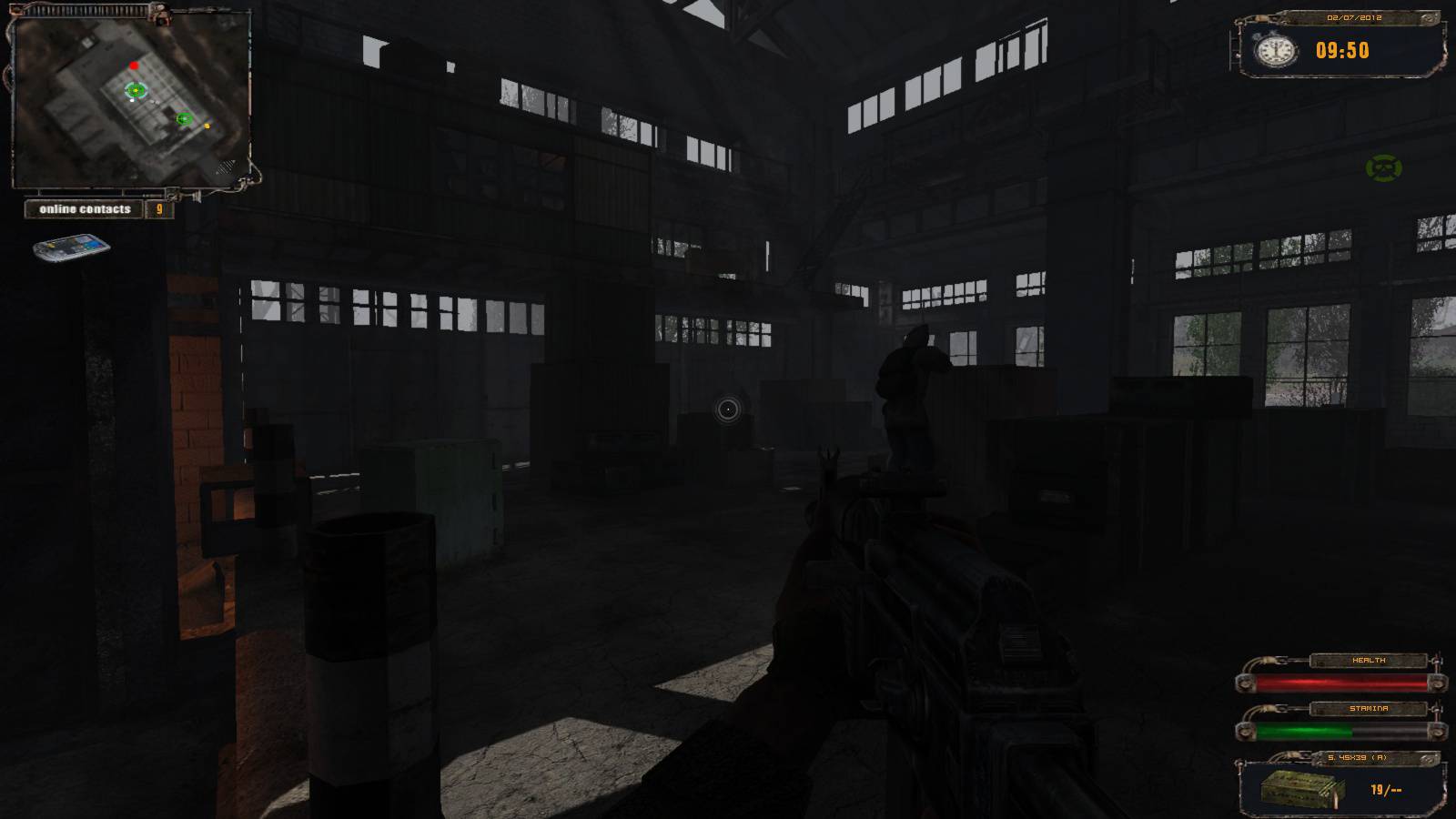 Now, let's talk a little about the current situation.

As we said before, we are replacing trees on all levels, and this is near completion, only one map remains to be edited. Then we will start to recompile all maps in high quality. Regarding the engine and scripts, February - March was not much fun as there was a sea of bugs. Now the severity of the situation has softened with almost no script bugs and just a few engine bugs. There is also still quite a lot of work to be done on the render and just general polishing. Bugs in the render are the most serious as debugging them is complex and most causes at this stage are unknown. We did, however, manage to fix some real annoying bugs, like the water surface, which was vibrating and LOD issues where vehicles and rocks would disappear when we approached them. It was a long process. We have had these render bugs since late March!

Meanwhile vintar, dezodor and loxotron have started working on filling locations with objects to minimize their emptiness IE: various boxes, loot, anomalies, camps and other items. Previously we concentrated on the main storyline only and decided to only fill the maps with anomalies and extra camps, lairs, and collectibles when it was finished and tested.

As for my current work on the project, griph00n and I are working on updating the global renderer to fix the current bugs and add new graphical features ( support DX10, DOF, corrected SSAO ( for now SSAO does not look quite right) , etc.). Since the work is really indepth and complex, it is unknown how long it will take and whether we will have time to implement as quickly as we would like. Time will decide ;)

Other additions / fixes include:

- A member and good mate of our team optimized the game, speeding up the game and SDK by 10-20%.

- I have long wanted support for stereo sound, so I can listen to music while playing :) Well, after this message, we finally had to do it:

I first tested a song by Metallica which played perfectly in stereo. Later all ambient music was included in stereo support (without the use of the two tracks and edits to the left column , as before).

- New HUDs were added. The player may at any time change the interface, such as the old build style to another interface made by Cromm Cruac, which is pretty modish. New hud includes new trade, search, inventory, and chat windows, as well as new icons.

- Support has been added for scopes on widescreen monitors so the texture is strongly stretched.

- At any point in the game you can change the text language without any problems. In SOC, the language was changed on one line in one file in the archives of the game. Because of that, you can see separate Russian and English versions of the game. Now I hope this will be avoided.

- Lots of trivial bugs were corrected, sometimes they were even funny: 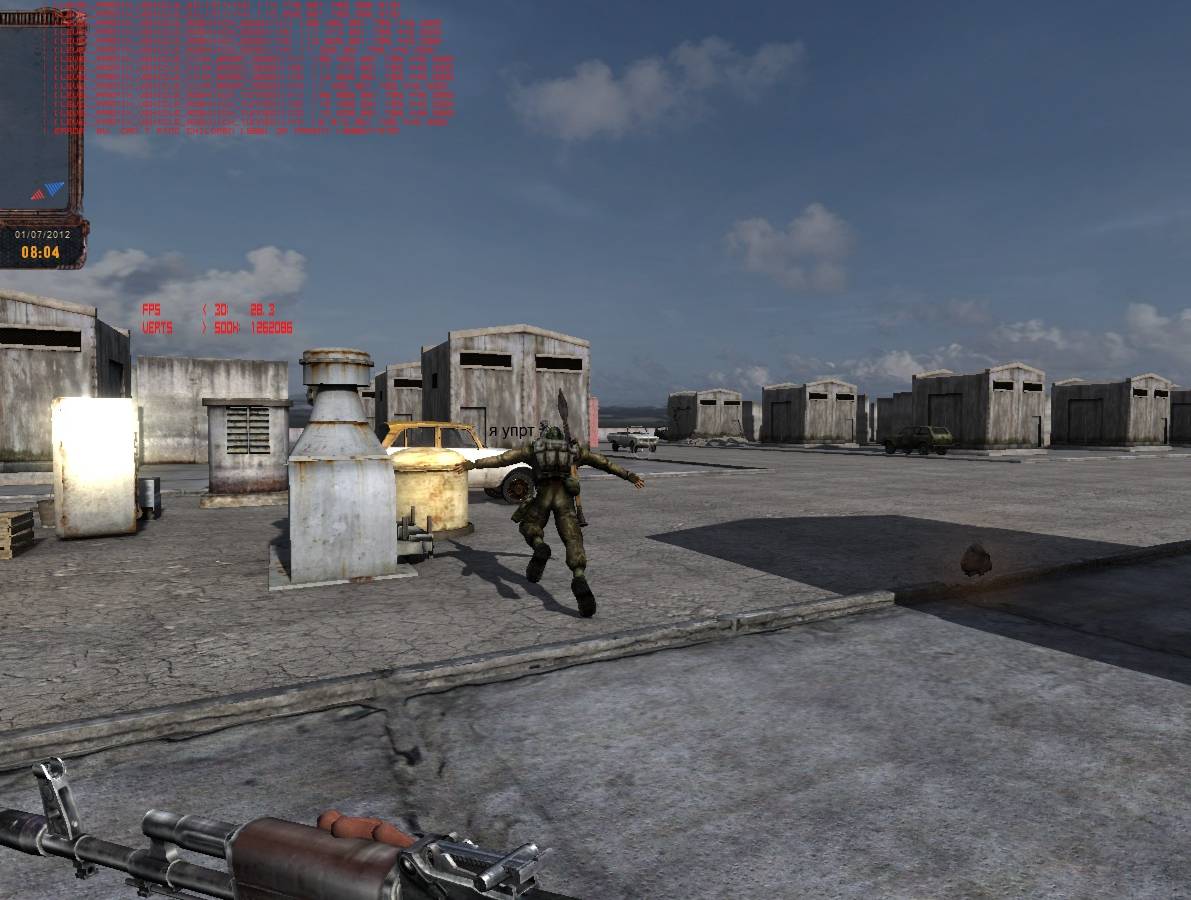 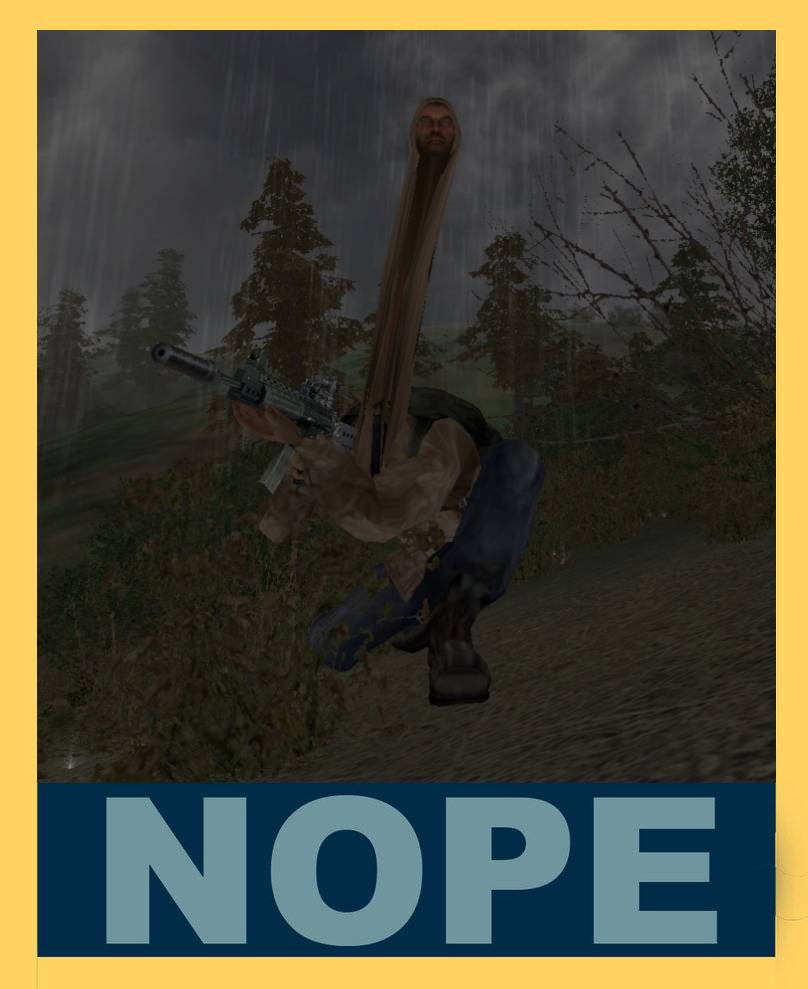 By the way, I forgot to mention, I have been asked many times if the actors body will be visible in first person view. To clarify, yes it will be. If you change your suit then it will change on the body as well. Moreover, the actors shadow has been implemented in dynamic lighting (in one of the screenshots you could see it), which adds a bit to the atmosphere and makes us feel that we are playing as a complete person :) I have not, however, been able to make these features work simultaneously due to the limitations of the render and other factors, so now the player must choose between either displaying the body or the shadow of the protagonist.

At one stage there were two members of the team who did not get along well, and an altercation occurred. To distract myself from all the controversy, I decided to do some animating, because a lot of times I tried to start, but failed. I gained some knowledge and advice STRIFER animated, for which I am very grateful. Shortly after posting the first blog, I posted a video with updated AK - 74 animations to get some feedback (those who missed it can see it here : Youtu.be). At first I just wanted to remake the reload animation for the weapon , while studying 3DS MAX. However, I soon began to rework other animations. I Made new weapon animations for show/hide, run ( based on animation from build 2571, modified and revised) , and fixed some animations for other weapons. The reload animation, due to lack of time, is currently, let's say , not very good, so it will be disabled for now. I also made ​​the missing running animations for binoculars, grenades and bolts (also added a new funny idle animation for bolts ). I will slowly make some additions to other weapons.

I think I will end this edition there :) When will the next blog be? I do not know, we are very busy with the game now. Until next time, so long!

Thanx for so much info !!

Nice inside view on the progress. You guys deserve so much respect and MONEY for all the work & time you have put into this huge project.

thanks so much.. good to see the game goes great so far :)

Thanks for the update and the diligent work!

damn !! can't wait to bring back stalker soc back in my memories ,this mod gonna be completely kickass ... yehaaa

As I understand, on static lighting renderer (R1) the shadow (default for R1) and body awareness can work together, but not on R2?