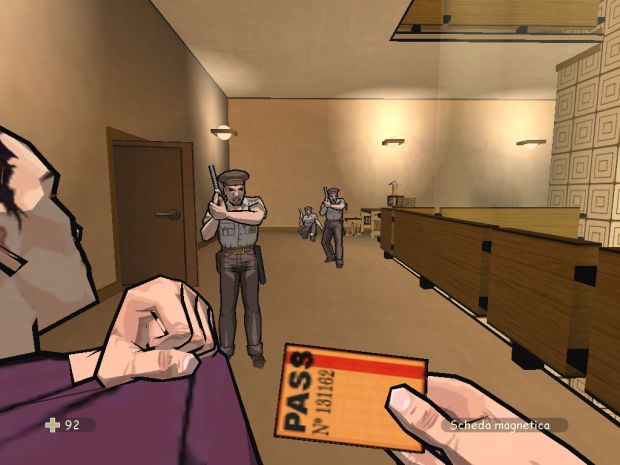 To understand: Read description
I dont know whats that 4 a language.
I took pictures outta google, cause I lost the cd :S

XIII was an awesome game, but I too lost my copy. T_T

WHY MUST BAD THINGS HAPPEN TO GOOD GAMES!? T_T

XIII, 13, the Game. Comic Shooter. X, V, VII. All numbers.
You play Steve Rowland, or you think it (I hide spoiler!).
You wake up on a beach, a coast watch woman saved you. A helicopter is flying above you, and you remember something. A boat, you got shot.
You fight versus some other guys, you dont know why. You visit a bank, but then the bank got robbed! After you escaped outta the bank, car arrives. The FBI! They say: "Steve Roland, we arrrest you becasue of the murder on William Sheridan!" (Sheridan was in this "universe" the President of the USA (it plays in USA))
Thats the thing about the story.
XIII is in my opinion an awesome game. Lol, I should know it know, because I played it more than 35 times. (After 34 times I stopped counting, lol, but unfortunately I lost the CD :S)
Also its along game and you have fantastic tactical parts.
In one picture here you can see, that the player has a women as a hostage. You have to take her, to get out of the ban. If you point with the hostage at the police men, the will not shoot at you. If you turn around, they will begin to kill you.
Also, you can take chairs, bottles, ashtray and brooms as weapons, to knock out enemys silently.
At the beginning I wrote something about V (5), X (10) etc. Now think about the number XIII (13), why youre number 13 and 13 means, there are 12 more. And not only 12.....

The graphic is (imo) awesome. You get headshots (e.g. with crowbar, as little picture in the main picture (as you can see in one picture) and you can also see the word "BAM". If you shoot, the sound will also appears as a text ingame! Also the game has got a fantstic MP part.
I think I stop now talking about the game. Its enough to say: MUST PLAY! for every fps fan.
XIII was developed by Ubisoft Paris and SouthEnd Interactive and released at November 18, 2003.