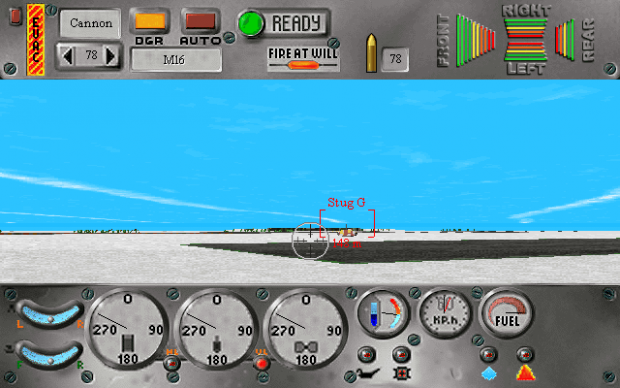 Muzzle Velocity was a computer tactical wargame released by Digi4fun in 1997. The program was a unique hybrid of standard two-dimension map-based tactical gaming, and first person action.

The game was developed by Code Fusion and Digi4Fun. At the time or release, it could lay claim to being "the ONLY true war strategy game that puts you in the middle of the action".(Microprose's M1 Tank Platoon was similar, but was considered a sim rather than a true strategy game.) The game graphics were garishly bright in colour, though armoured vehicles sported historically accurate camouflage paint jobs, and many touches were added to the three-dimensional world that would remain absent in later, more serious, wargames (such as Combat Mission) such as civilians, telephone poles, and moving railroad trains.

The player would select forces and move them on the two-dimensional battle map, while a tactical AI would resolve battles; however, the player could jump from unit to unit, taking over in a first person capacity. Gameplay was very arcade-like, and damage modelling was unrealistic in the extreme. Heavy machine guns could be used to knock stone buildings into piles of rubble, for example, and individual penetration statistics of the various weapons and armoured vehicles seem to have been fictional. As well, limitations of the game engine restricted engagement ranges to a few hundred metres.