March was an incredible month for us, being invited to three great festivals in the USA and in Germany. If at any moment we thought it couldn’t get any better, the gods of luck and videogames just had another unbelievable thing in store for us. Now that we’ve piled up a mountain of happiness, we’d like to share what it’s like to go to the Independent Games Festival, the Independent Propeller Awards and the German Computerspielpreis, all in within four weeks.

We started flirting with the IGF more than one year ago, when we just missed the submission deadline for its 12th installment by approximately two months. Back then we wanted to submit our prototype demo "Up That Mountain". Perhaps it was some kind of weird destiny to fail that deadline, because who knows whether that old demo would have brought us as far as "Grandpa's Leftovers" was able to. After the student entries were published, we realized that our chances to see San Francisco were pretty slim. There were just short of 300 submissions and a lot of them were amazingly good. In our previous contest, the 2010 Indie of the Year Awards, we probably were as far away as possible from touching an award, which we attributed to the large amount of great games. Even bigger the surprise when we were nominated for the IGF Student Showcase. We quickly decided we had to show more than just one level at the IGF, so we declared the following weeks crunch-time. Eventually, we didn't finish all the levels we planned, yet we were highly pleased with the build we took to California.

On the first day of GDC we had plenty of time to inspect the location, watch the carpet being freewheeled and participate in the conference. On Tuesday we went head-first into action, and prepared our exhibition booth. 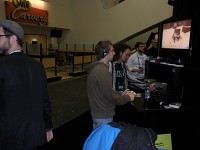 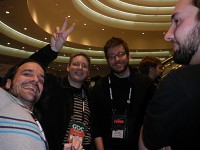 After setting up the machine and doing final test runs, it was time to look for an evening beer and to relax. So we went to the IGF opening party, where we met some of the other student showcase guys, like Richard Flanagan, the creator of FRACT and winner of the Best Student Game award, and Philip Tobitoski, one of the developers of Octodad.Wednesday was our first real exhibition day, which was enormously overwhelming and exhausting. The whole day was spent explaining our game to developers, publishers and press. But the number of contacts and friends we made in the development community must have been ten times higher than during our whole development phase. Simply a stunning experience, and we encourage every indie developer to visit the GDC some day, it’s as good as everyone says it is. 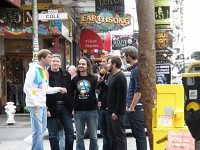 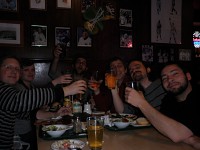 At the awards ceremony, we enjoyed the privilege to sit at one table with Mojang, joined by bottles filled with finest beverage. You can watch the ceremony in all it’s glory at GameSpot. Afterwards, we walked our way to a party, which NVIDIA had handed out invitations for, offering free food and booze to our delight. Even rice that turned out to be onions didn’t reduce the whole festivity. The next day was sweetened by an interview we gave to German television in Haight-Ashbury, and we spent the last evening in San Francisco at a certain pub, which shall not be named. After all, it was a blast to be at GDC! Having some time left to visit tasty places like In & Out Burger, and one serving nameless food in Chinatown didn’t hurt either, as did encountering hobos hiding in makeshift shrubbery to yell at people. Goodbye San Francisco. We're hoping to see you again!

While we were still marvelling at the wonders of GDC, we got spectacular, thrilling news: Tiny & Big had made it to indiePub’s Propeller Awards finals, despite stiff competition of 150 submissions. Next stop, Austin, Texas.We had initially planned to take 2 weeks off after GDC, and travel the US of A. At first we did that for a few days, and then took a flight from Seattle to Austin, arriving a day late to the festival. At the SXSW Arcade expo hall, everything was already ready to go. The guys and gals from indiePub really worked their butts off and made sure that we only had to take care of presenting our game, and nothing else. It was a welcome change from the IGF, where they basically tell you “Well, here’s your booth guys, have at it.” Not to mention they payed for flights, a nice hotel room, and even food (also, even booze once. Oh indiePub, you know how to get us Germans). 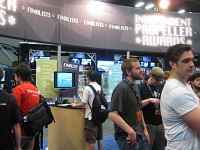 Despite the nice accommodation, the festival turnout was not really comparable to the IGF. We met a lot of gamers who liked the demo, and a few people from the industry, but all in all it was pretty relaxed. The atmosphere was incredibly friendly, and gave the indie developers a great opportunity to socialize. In the end, everyone had more fun than they would have expected. Shout outs to our friends Robin Arnott (Deep Sea), Pete and Sam (Creo), Chris and Vladimir (Chewy), Marco and Matt (GLiD), Thomas (Skinny) and Uncanny Games (Uncanny Fish Hunt)!The festival was topped off by the Independent Propeller Awards show. It assembled all the developers, press, and hosts Adam “Atomic” Saltsman and Meredith Molinari, for an evening of high-brow entertainment. No, really, despite technical hiccups, the indiePeeps did a great job again. The suspense was quickly over for us, as the second award announced was the Unity Development Award, and it was bestowed upon Grandpa’s Leftovers. Adam actually stated that some of the judges liked to call it the “Awesome Game Award”, just because they liked the game that much. That was a very nice moment for us right there.On the subject of Unity, although they stated in the award description “the winning game does not need to be developed using Unity”, it’s probably fair to say that this award puts some kind of label on Tiny & Big. Our own Scape Engine is the technology powering all the freaky stuff going on behind the scenes, and it’s as much a part of the game as the artwork and design. However, no offence taken, just making sure to prevent any confusion.To finish on a lighter note, after the awards show we went out to let the parteying commence, and managed to wind up in a club promising sharks below the dancefloor! Only it was a day sans sharks! Oh the disappointment! Yet, we made the best out of it and danced like it was 1991...

At this third and final award ceremony we participated in the category for best concept of young academics. Because this award is a national one, here’s a short explanation of its meaning: The award is an initiative of politics and economy. It focuses on games which are innovative, and of high cultural and educational value. The categories are best concept by young academics, best game for kids, best game for teenagers, best serious game, best mobile game, best browser game and best overall game.Half of the time on the road to Munich was spent discussing our chances to score the award. Arriving at the scene, we smoothly slipped ourselves into cheap tuxedos and walked to the ceremonial place. Coming back from the US, we were used to large spaces, but the award ceremony was much smaller than the IGF’s or IndiePub’s. Our category only had 34 submissions (and this was the category with the most entrants). Running with us for the award were two more nominees called BeatBuddy and daWindci. The ceremony itself was very exiting and the host presented all the games pretty passionately. This was a huge and very nice surprise for us. Then suddenly, excitement destroyed our faces at the moment our game was called. We stumbled upon to the stage in a rubbery manner, and received a pretty nifty trophy with built in LEDs (means you can even turn it on and off).Following the German Computer Game Award were the LARA awards, which prize international games. The entire show lasted for more than two hours (you can watch it below). After receiving the award, we were delegated to our first VIP photo shoot on a red carpet in front of an advertising wall like the royals of royaltonia. This was a very weird experience, imagine a dozen photographers shouting at you; “Look here!” and “Do this or that pose!” 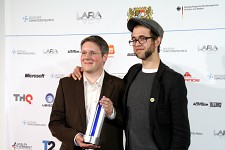 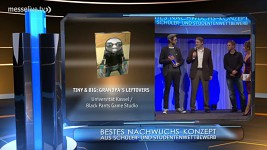 After this interesting event we gave a relaxed interview to some very nice guys from our hometown. They are working for an online YouTube channel called GameInside. You can watch a snippet of the interview down below but it’s in german only. After the whole show, we stored the pillage in the car and had good evening spendage at the “P1”, where food was solely served in glasses and we had some bursting laughs with the guys from Threaks.