Starbound is a 2D space exploration sandbox game developed by Chucklefish Games. Star systems, planets, weapons, and enemies are randomly generated, but unlike other games in the genre there is also plot the player can follow if he chooses.

It’s been a while since we posted an update as we’ve been feverishly working away on the game. But we’ve had an increasing number of requests to detail what the finished game will be like. So I wanted to go into detail on what we consider the finished Starbound experience to be (subject to change! as always). As well as where Chucklefish is going in the future.

Posted by TheUnbeholden on Aug 5th, 2014

It’s been a while since we posted an update as we’ve been feverishly working away on the game. But we’ve had an increasing number of requests to detail what the finished game will be like. So I wanted to go into detail on what we consider the finished Starbound experience to be (subject to change! as always). As well as where Chucklefish is going in the future. 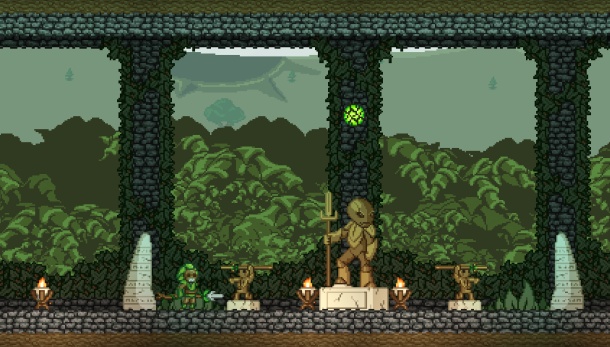 The future of Starbound

The following is a collection of some of the broad changes coming to Starbound in terms of progression. Not included are smaller self contained features like ship upgrades, vehicles and so on.

Progression As it stands, almost the entirety of the progression in Starbound is temporary. Built quickly to enable some basic gameplay during beta.

The final game will be structured differently.

The current 10 tiers of gameplay will all play out on the same Starmap, with each tier introducing hazards that can only be overcome by progressing through the previous tier and completing a mission at the end of each tier.

To access a mission at the end of each tier you need to obtain a certain number of pixels.

An example of this progression would be:

Obtaining Pixels Obtaining pixels will be key to progressing through Starbound. To access the mission in each tier you must first gather a certain number of pixels.

Currently obtaining pixels in Starbound feels like a bit of a grind. Particularly given the pixel death penalty and the high cost of various pixel sinks. In large part however this is down to unimplemented features being missing.

In the finished game you’ll be able to earn pixels in a multitude of different ways, essentially allowing you to play through the game the way you want to play. If you’d like to become an intergalactic farmer, growing and selling crops, keeping livestock and so on. The farming feature will be fleshed out enough for that to be your means of pixel gathering. On the other hand, if you prefer to be an adventurer, taking quests and gaining pixels as rewards. That route is just as good. Perhaps you prefer to be a builder, charging npcs rent based on the quality of the homes they inhabit. A pirate, robbing towns and ransacking villages. A tomb raider, gathering rare artifacts.

There will be many different routes through the game, each just as deep and profitable as the last. Each will branch out and become more complex as the player advances through tiers, unlocks new technology and becomes more proficient in their chosen skills. Essentially we’re describing the gameplay equivalent of a tech/skill tree.

End game So eventually you’re going to get through all of the missions, you’ll have the best gear and you’ll be looking for a new challenge. This is where sector X comes in. Sector X is a collection of planets in which PVP is enabled by default and players battle over controlling various planets. To take part in the battle you first have to form an organisation (in game), which gives you access to a space station shared by other members of your organisation. The space station doubles as a ship that any captain in the organisation can control and is constructed from blocks and objects for full customization.

The PVP in this sector is entirely optional, players choose whether or not to attack each other or work together. Monsters, quests and events will be strong enough to be challenging even with the best tools in the game. And in game events, invasions and so on will keep the experience fresh.

Director Mode On top of sector X, one major part of the replayable content will be director mode. Director mode exists within a separate Starbound client that allows admins to connect to their servers with a range of new tools built to control the action for their players. Admins in director mode (there can be multiple), will be able to spawn blocks, items, monsters, npcs at will. Take direct control over them, have them speak and interact with players. Essentially director mode allows admins to take on a similar role to that of a dungeon master in D&D, creating scenarios and stories on the fly to ensure players never have the same experience twice.

Using in game wiring tools players will be able to create their own mission maps and challenges that can be shared with other players. Custom missions installed on a server will be available to all players at any point and will function as instances. Parties will be able to enter these instances together as many times as they like.

We’ve taken steps towards better mod support recently with the implementation of a .pak file system. Essentially condensing an entire mod into a single file. We’re not far away from also implementing a system for servers to share these pak files with clients on connect. This will allow mod authors and server admins to entirely overhaul the vanilla starbound experience for the players on their server.

We’re implementing a range of security checks to minimize cheating on a broad scale. But for admins that desire absolute security we will also eventually be implementing server side characters, including server side accounts and the option to require a new character the first time a new player connects. We want to empower server admins to create a unique experience on their server.

Update Schedule Currently our update schedule relies entirely on waiting for engine updates to be finished before we are able to push any content updates to steam. After the next update we’re actually changing the way we work and separating content updates and engine updates. What this means for the end user is that content updates will hit several times a week instead of once every week/two weeks. The game will constantly evolve and you may find new things every time you log in.

The future of Chucklefish

So that’s Starbound, how about Chucklefish as a company?

Opening offices We’ve actually just signed for a new office that we’ll be opening in London in the next 2 or 3 weeks. It’s a very exciting time for us, we’ll finally be working in the same room right in front of each other and our productivity is going to improve massively as a result. We also intend to provide some temporary office space for the games we publish and assist on. We’ll be blogging about opening the office soon, complete with photos and whatnot.

Publishing We’re going to continue helping out smaller indie companies publish their titles. Games on the horizon include Stardew Valley, Halfway, Treasure Adventure World, Wanderlust Adventures and more. We’d like to progress more in this space and assist indie developers make their games profitable without giving away huge percentages of their income away to predatory publishers.

A second game We’re going to be producing a second game along side Starbound, with an entirely new development team. We’ll be looking into hiring UK developers for this project shortly (CVs to business@chucklefish.org if you’re interested!) This won’t slow down the production of Starbound at all, worry not, I will be assisting in the design but we’ll be working with entirely new developers. At the moment we’re still in the stage where we’re kicking around ideas, one that keeps popping up is a top down, open world, multiplayer pirate game.