Oil Rush is a real-time naval strategy game based on group control. It combines the strategic challenge of a classical RTS with the sheer fun of Tower Defence. Fight the naval war between furious armies across the boundless waters of the post-apocalyptic world. Pump the ever-so-precious black gold by oil rigs, capture platforms and destroy the enemy in the sea and in the air. Be ingenious to unlock super technologies and quick to send your squads straight into the heat of the battle!

OST in high quality as a pre-order bonus


We are very grateful to all of you, who pre-ordered Oil Rush, for support and have yet another bonus for you - effective immediately the official Oil Rush soundtrack by Paralyzah is available to you in high quality. Oil Rush OST consists of 18 amazing tracks - a unique mix of heavy industrial, breaks and ambient.

It will be out for sale separately once Oil Rush is released but you can enjoy it right away and free of charge (Desura pre-order users will get as soon as we understand how to attach a new package to the game here). Thanks again for your support! 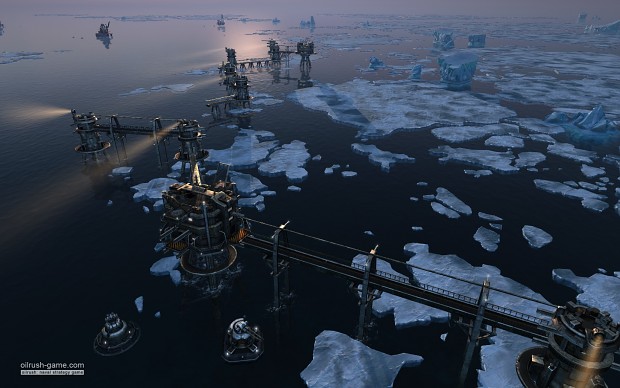 Would be awesome for LANs.

That's unlikely because we want the game to run on even low-end PCs.

is an Athlon II 64 bit at 2.1 Ghz and a Radeon Mobility hd4250 with 256MByte good to play this beautiful game? If it's so i will buy it for sure on Desura or Ubuntu Software Center.

No, your GPU is too slow.

Yeah, thought that might be the case...but no harm in asking. Really enjoy playing the game..especially with friends. :) Thanks for also supporting Linux.

There will be more multi-player maps next week, including maps for 3 and 4 players.