Our team is working on polishing the game for an alpha release now. I've been working on adding info to the HUD as well as giving players a few more options while out in space. Rusty has made an incredible "asteroid belt" themed mission for us.

I wanted to briefly talk about some of the progress our team has been making with the single player portion of Ensign-1. I think the general mode we're in right now is polishing things up for the alpha release which we'd like to get out as soon as possible.

I've mostly been working on the space gameplay these past couple of weeks. I've added a few things to the HUD, such as highlighting all of the enemy ships in a scene, and showing you their distance to each one. In addition, you can now target enemies in front of you, and information will be displayed in your cockpit about that enemy. This ties into the fact that there are now two kinds of lasers your starting fighter will have, one that is most effective against shields, and one that is more effective against hulls. You'll need to effectively switch between the two if you hope to dominate your enemies. I've also been taking small stabs at improving the sound effects in game, though I realize I still have a long way to go before that's finalized. 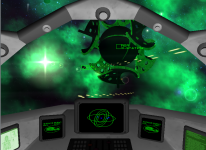 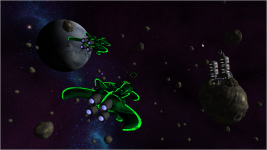 The second bit of update is that Rustybolts has been working on a new mission map for us all to enjoy. The second mission in the game will take place in a meteor field, and the player will have to not only take down enemy fighters, but also a system of unmanned turrets before they can set foot on an asteroid base in hopes of finding information that will help our team better understand this alien threat. Anyway, here's a video showing off a little preview of this level.

The very last bit of update that I wanted to talk about was that I also put up a little demonstration of the in game editor we were planning on releasing with the game. Those who purchased the option in our Kickstarter or in our ongoing 8Bit-Funding campaign will be able to use the editor to build their own room in one of the game's space stations. Anyway, in the video I show you how to make your own space level, by going over some of the features of the editor, such as the ability to group box select and mass duplicate items in a scene. That's here if you're interested.


And as always, if you're interested in securing a pre-order of the game, interested in building your own level, advertising in the game, or what have you, check out our 8Bit-Funding page. Thanks for reading and happy hunting!