With less than two weeks remaining in the Endless Space 2 #EndlessMods Modding Contest, here are the entries so far. 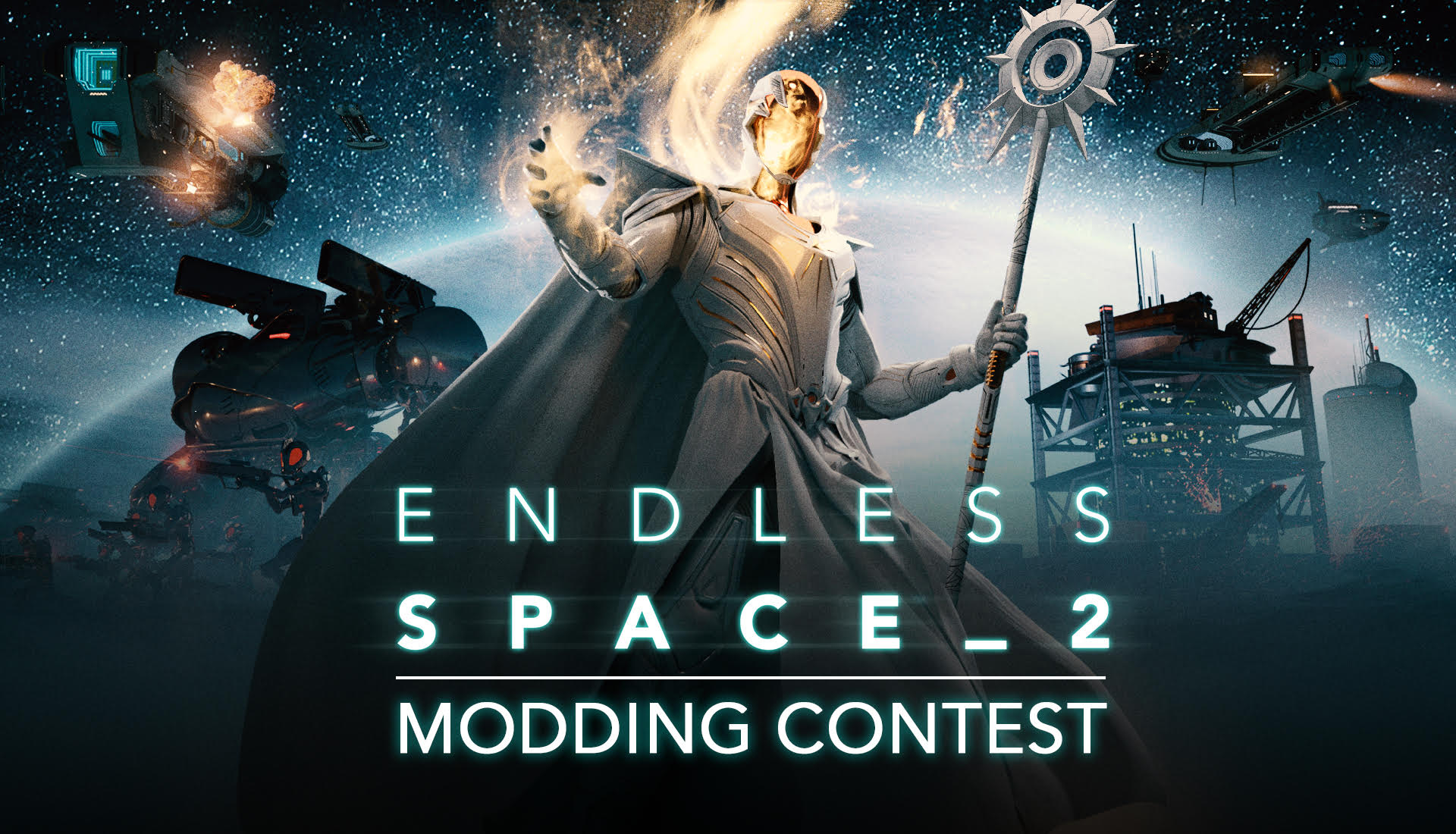 With less than 10 days remaining to enter ModDB’s Endless Space 2 #EndlessMods Modding Contest, we thought it time to round up the current entries and showcase the work that’s been submitted so far! These mods will be in the running to win a GeForce GTX 1080 GPU, courtesy of NVIDIA, as well as signed Endless Space 2 prints and digital game prize packs from SEGA!

Submit an ADDON Submit a MOD

Those who are interested in entering the #EndlessMods Modding Contest need only create a mod for Endless Space 2, whether it’s a ship skin, new game mode, tweak to the core 4X mechanics, or in-game quest. You have until January 14th to submit, and entries will be judged based on their innovation, complexity, and how fun they are when integrated into Endless Space 2.

Head on over to the main competition page for more information. And now, here are the current entries so far. 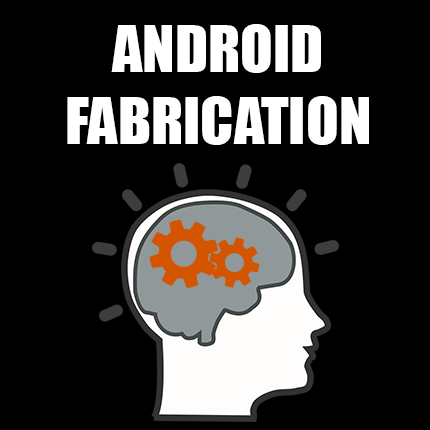 Take your empire through the stages of constructing androids and choosing specializations to best suit your government! Will your androids be civil servants that work for the betterment of your nation or will they be uncaring machines of death to your enemies? In all it adds 5 researches, 7 standard buildings and 2 empire wonders. 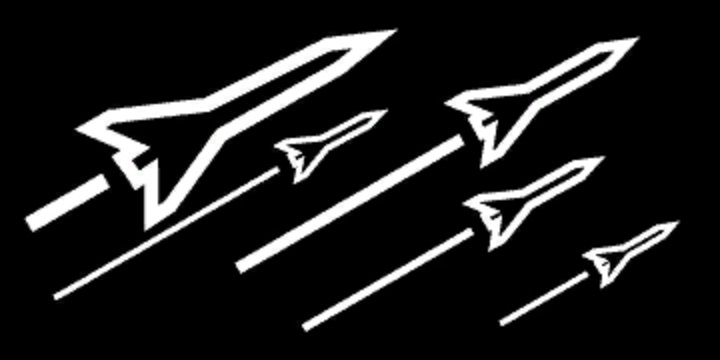 I doubt I'm the only one who thinks it weird that the Amoeba have no conditional trait, making them literall the only minor faction to not have one. Well, seeing as in ES1 they were a diplomacy-oriented faction, I thought it would make sense if they gave some Influence as well as food. Adds +1 Influence to Amoeba Populations on Fertile planets, as well as +1 Influence from splicing them. 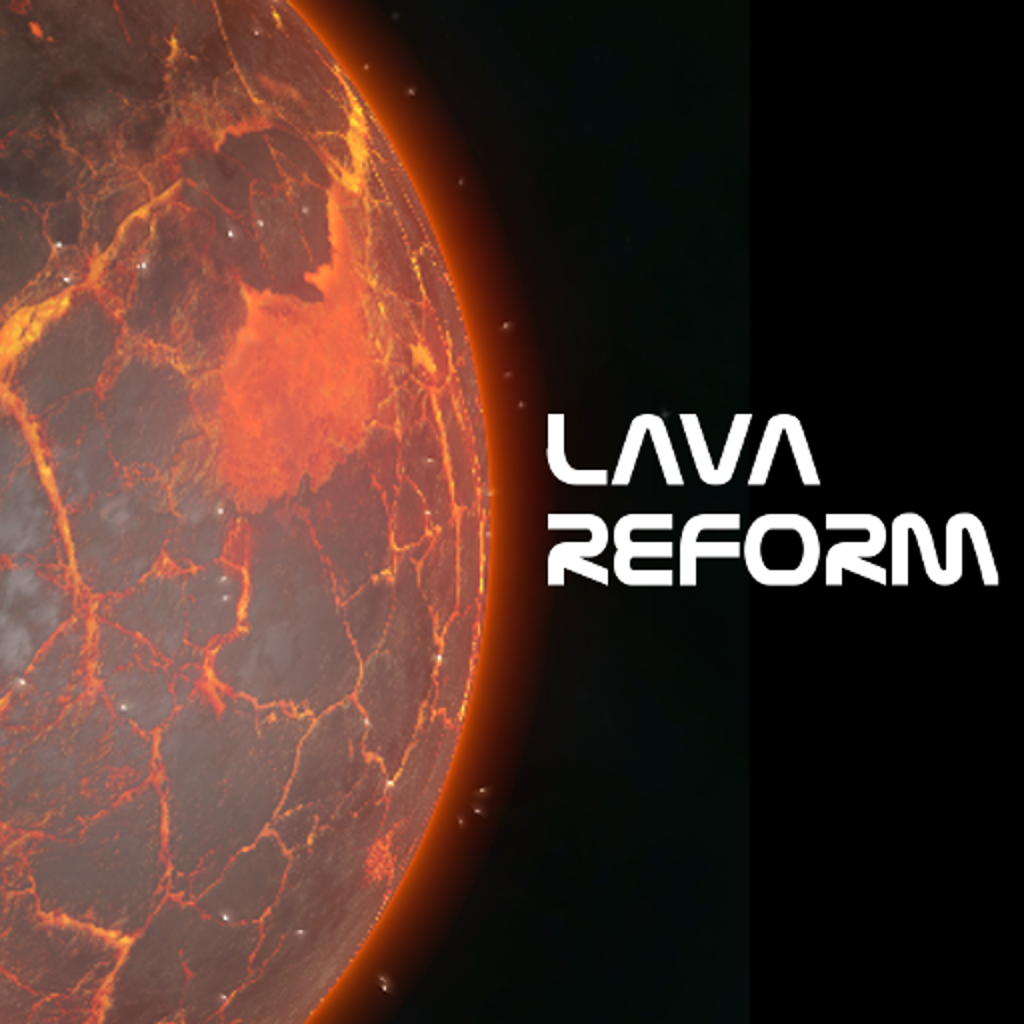 This mod enhances the Lava and Ash planet textures by increasing the brightness of the lava. 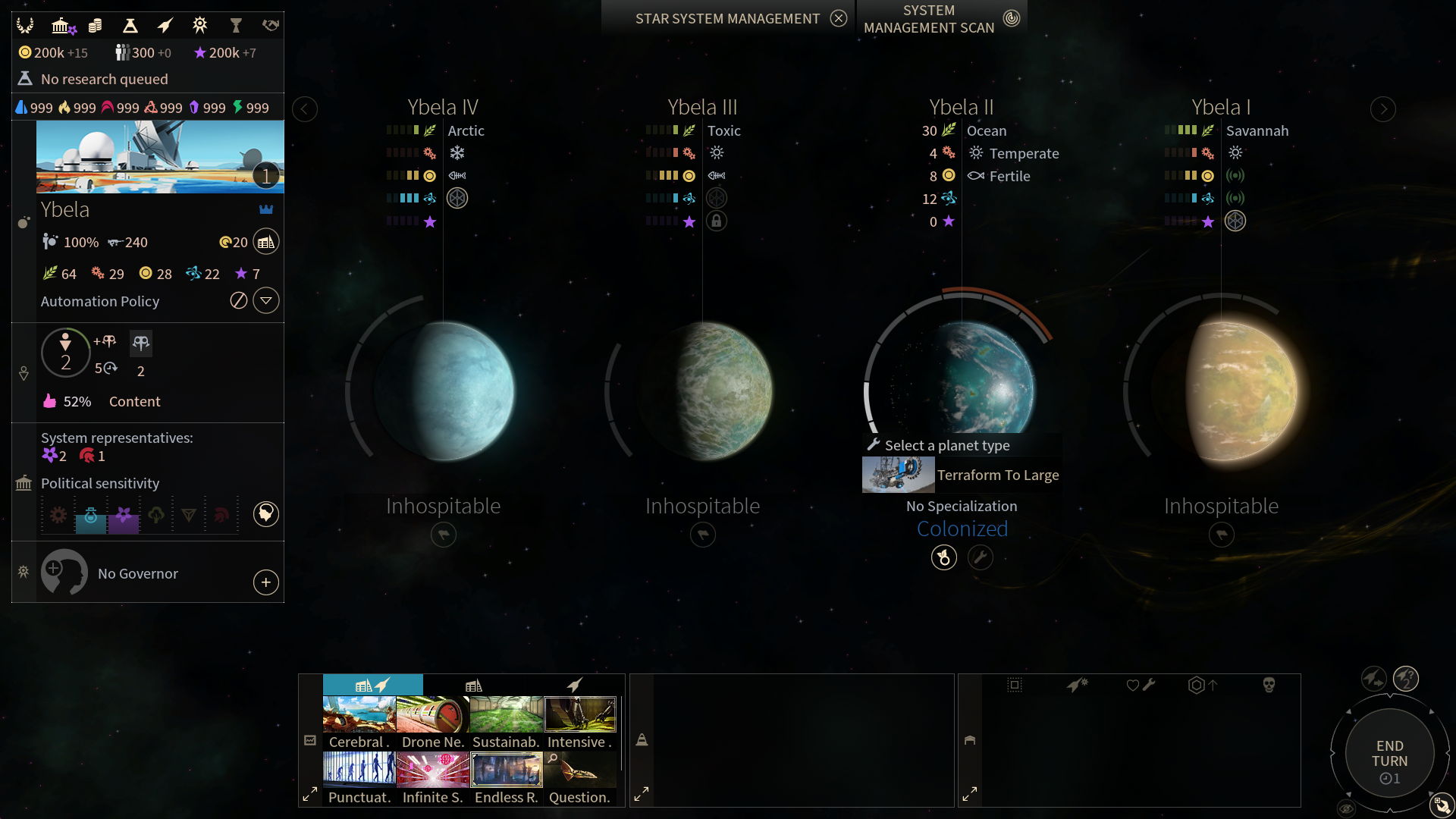 This mod adds the ability to increase your planet size through the terraforming interface. Requires Advanced Terraforming to unlock. 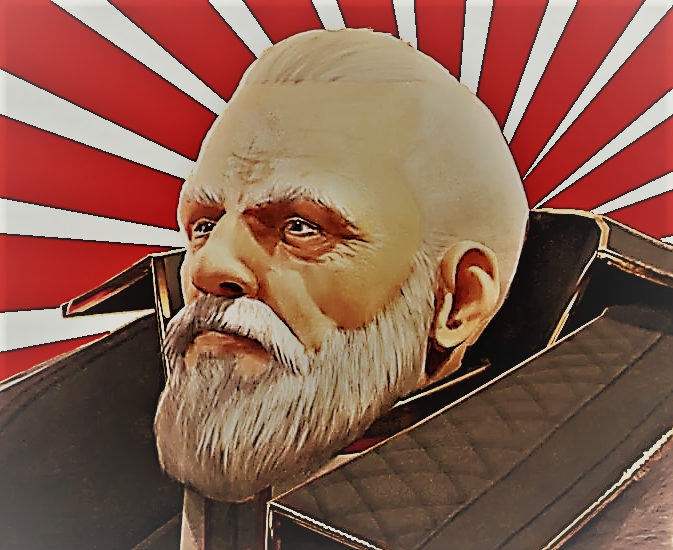 Being the Supreme Leader of an empire is my favorite role, but I feel the dictatorship in Endless Space is lacking, so I have created this mod to do two things: 1.More law slots for Dictatorships (6 Slots) 2.Laws exclusively for Dictators. You are a Supreme Leader, and it’s about time you felt like it. 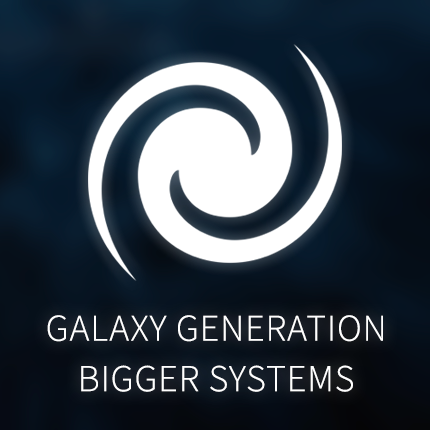 This mod changes galaxy generation in the way that only 4-planet and 5-planet star systems are available. That doesn't include Minor/Major factions home systems. It also fixes the generation of star types depending on the galaxy age, so you indeed get hotter stars (blue, white, protostars etc) in the young galaxy and cooler stars (red giants, dwarves etc) in the old galaxy. "No star" systems spawn is set to zero. 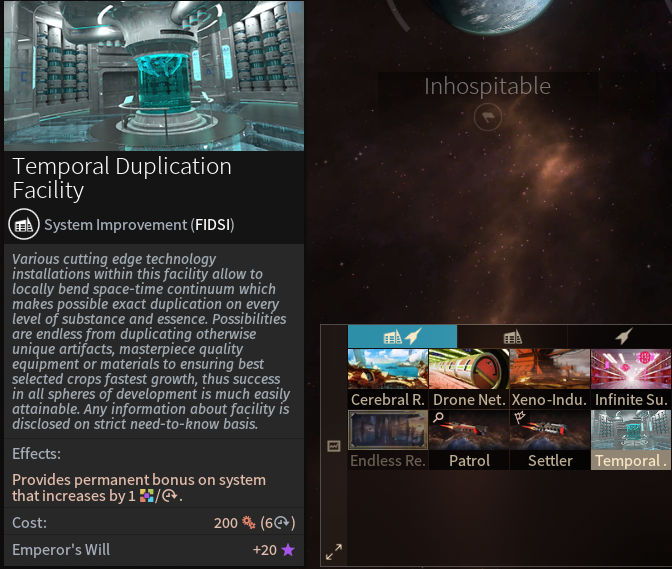 This mod provides a buildable improvement called Temporal Duplication Facility. From the next turn upon building it begins to provide a bonus to FIDSI which equals to 1 FIDSI, but grows by 1 per turn - so total effect on the system equals to +2, +3, +4, +5 and so on (similar to Riftborn Tower of Temporal Paradox). 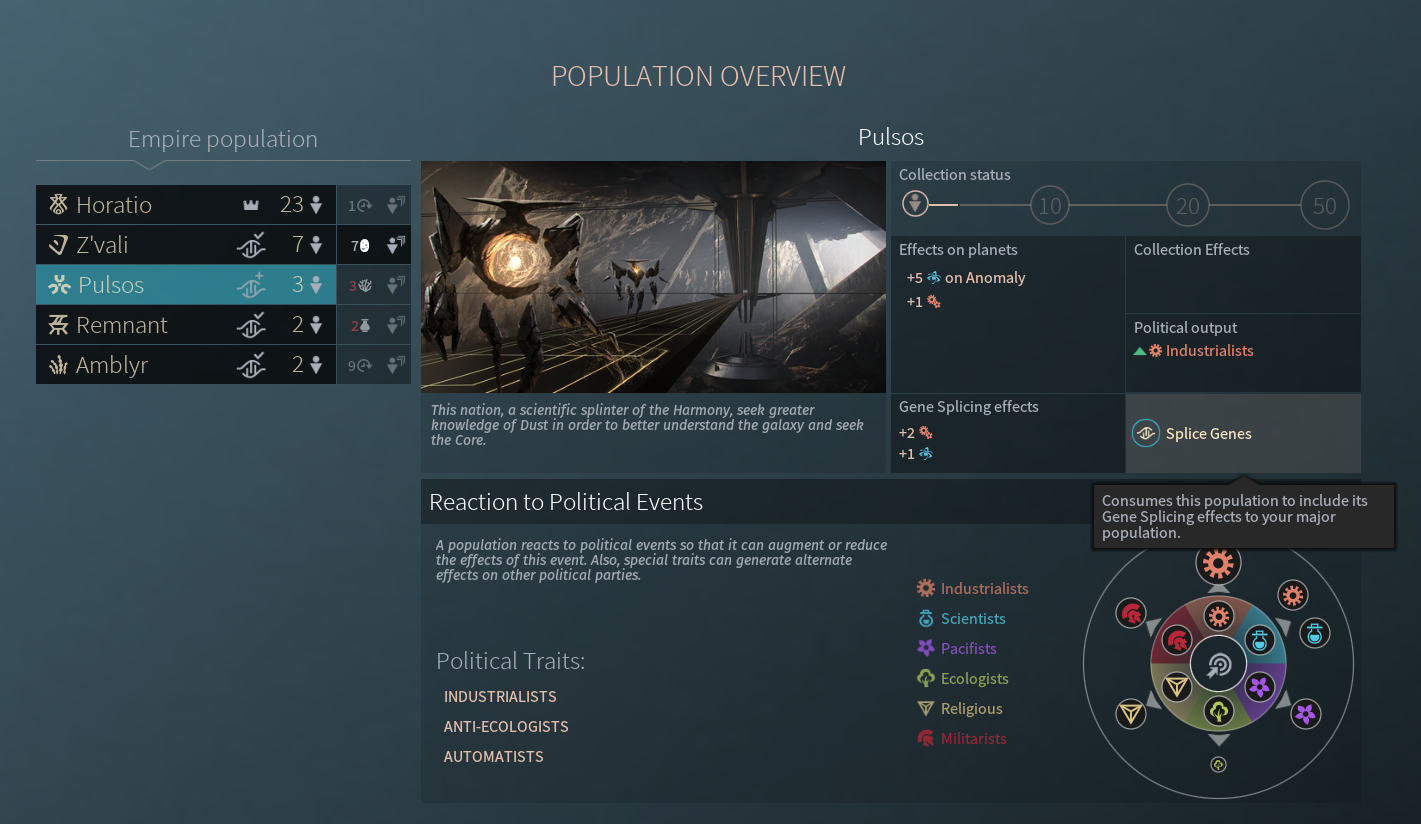 This mod changes the cost of Gene Splicing to 1, so you need only one population from faction to splice it and get bonuses. This cost does NOT increase with splicing and remains 1 for every splice. Food consumption penalties from splicing are unchanged. 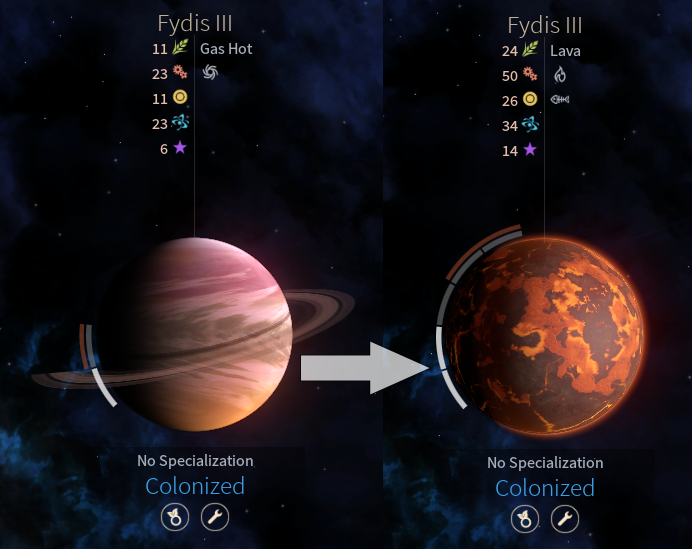 This mod allows terraformation of Gas planets into telluric planets: Gas Burning -> Lava; Gas Hot -> Lava; Gas Warm -> Lava; Gas Temperate -> Ice; Gas Cold -> Ice; Gas Frozen -> Ice. Those are available once first tier terraformation technology is researched; the Gas Giant must be colonized first, of course. The size of Lava/Ice planet will always be Huge, no matter what size was Gas Giant (which I think makes sense and is lore-friendly, since Gas Giants are usually much bigger than telluric planets). 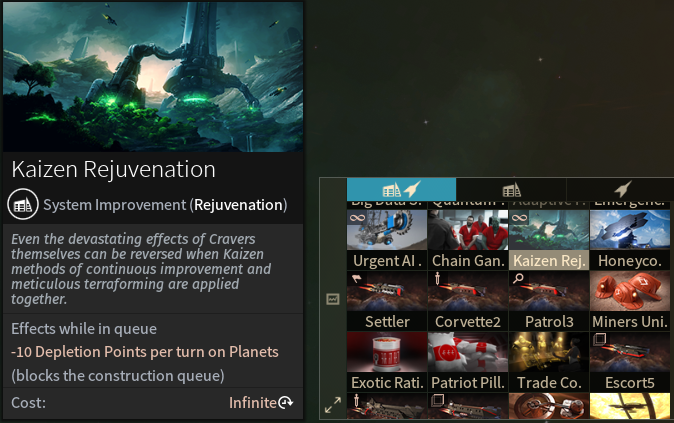 This mod provides an infinite improvement that reverses depletion effects of the cravers at a rate 10 points per turn (so the system is fully rejuvenated in 15 turns) and blocks construction queue. It is only visible and available for construction if there are depleted planets in the system. It is not available for Cravers and custom factions with Cravers affinity (Slave Drivers). 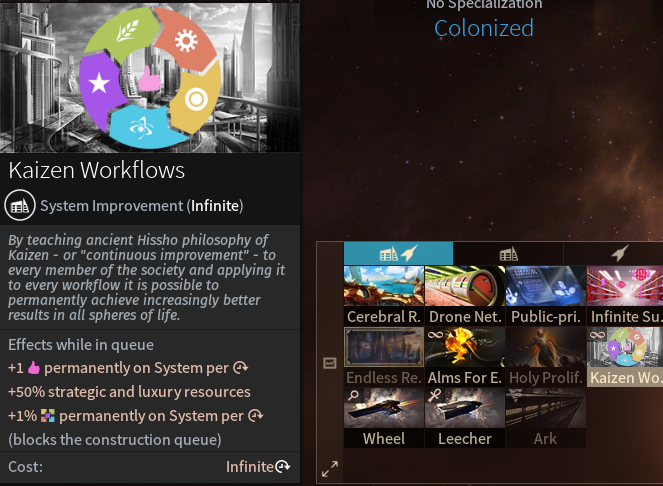 This mod provides an infinite improvement named "Kaizen Workflows" that gives permanent bonus FIDSI to star system by 1% of current FIDSI (works like investment with 1% interest rate), increases happiness by +1 per turn permanently and boosts strategic and luxury resources output by 50% if there are any while it is in the construction queue. Intended to be used on already developed systems. 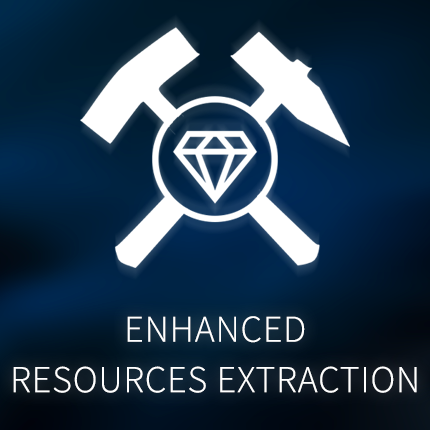 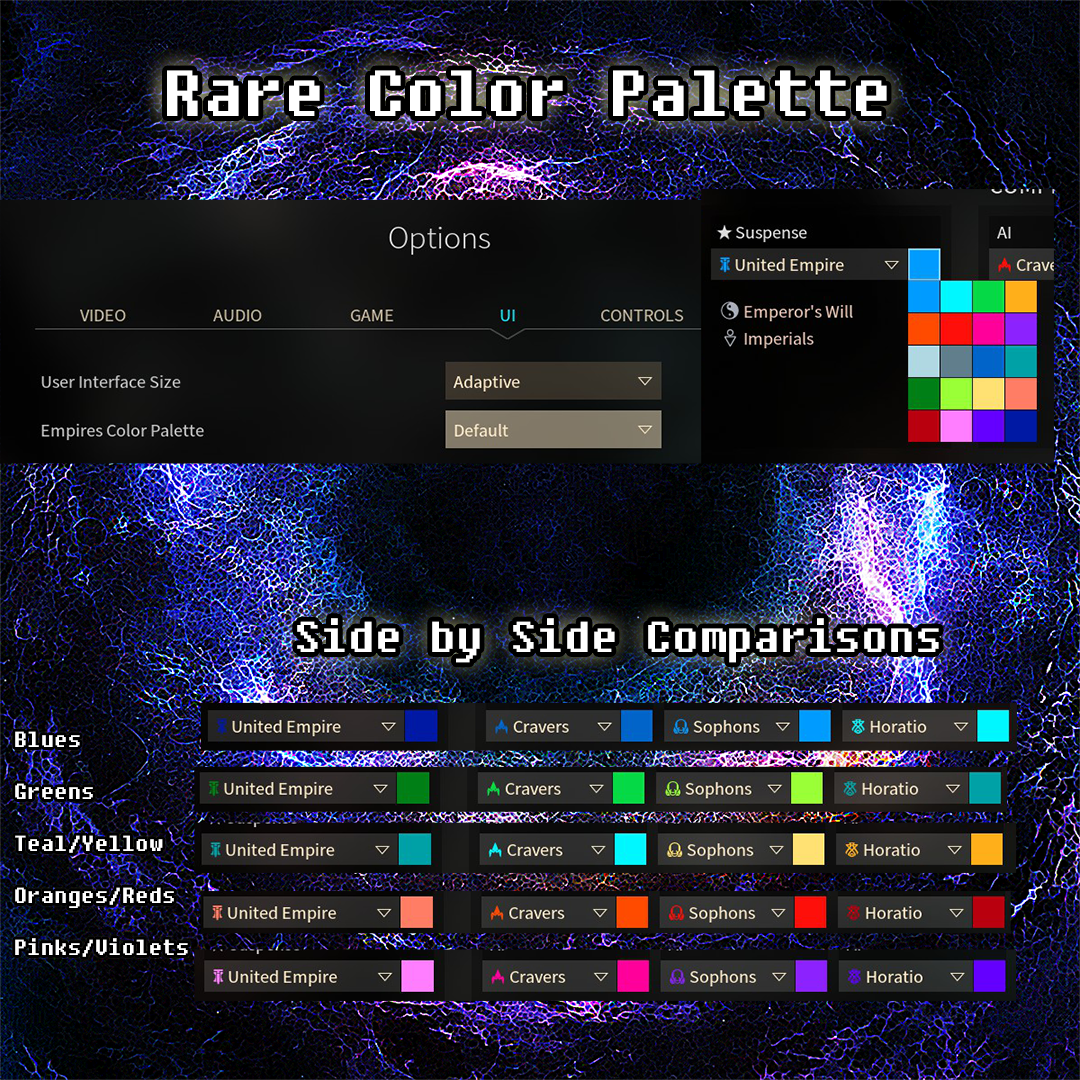