Alright, back to the old two week update cycle! And we got some awesome things in store. We added a new menu that will help you customize the game, made huge progress with the story, started talking about balancing and added some new gameplay bits. Spoiler: Special Attacks!

Alright, back to the old two week update cycle! And we got some awesome things in store. We added a new menu that will help you customize the game, made huge progress with the story, started talking about balancing and added some new gameplay bits. Spoiler: Special Attacks!

Charging up them Special Attacks

Special attacks are going to play a large role in CrossCode. And of course these special attacks should not only be useful but look impresive too. Next to Throw- and Close Combat Specials you can also execute Guard- and Dash Specials now! To use them, simply hold the charge button while guarding or at the moment you dash. Currently we only have placeholder attacks, but we can't just leave you without a GIF here! So here is a GIF of a bug that happened while adding the guard special:

We internally call this the "Creeper Skill".

Oh... you want to see the dash special too? Alright, alright:

Did you notice the little charge animation? This is also a new addition to special attacks. While holding the special button you can get up to 3 charge levels, 3 being the strongest. The longer you hold the button the higher the charge level. Here is an animation of it:

Time slows down during charging, so you got some extra time to think. But don't overdo it! If you charge for too long it will be canceled and you're left open for an attack. And don't worry if you accidentally charged up an attack, you can still use your dash to cancel out of a charge just like with every move.

As you remember you'll get 4 elements over the course of the game used for puzzles and combat. Of course these modes come with an advantage and a disadvantage. We'll get more in depth with this topic at a later date, but the important thing here is: You can't use an element forever.
Continuously using an element will result in an overload. This means you can't use any element for a while and have to rely on the neutral mode only. How this works you ask?
The indicator is at the top left, right under the active element displaying the current level of your overload. But that's pretty small and you don't always want to take a peek at the top left corner, especially in the heat of battle. So we added an overlay that will notify you if you are close to an overload: 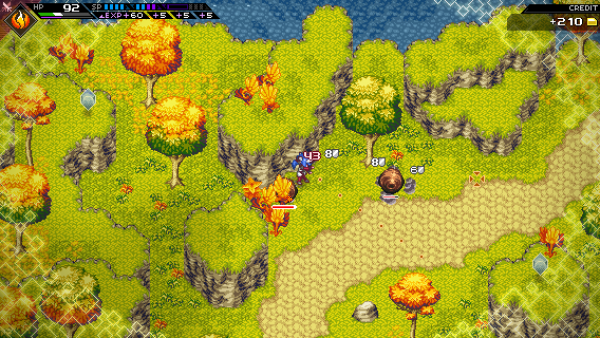 It will start blinking more and more the closer you get to the overload. The level falls pretty fast outside of combat so don't worry jumping from one battle to another. The idea is that each element mode is stronger than the neutral mode. You could think of it as your magic points. You can use them up to do awesome magic attacks until your points run dry. But instead having to take a potion to refresh you points you automatically do this (You can also compare this to the Drive- and Magic meter in Kingdom Hearts 2).

In the context of overload, we also added a small display over Lea to show you which element you selected. Again you don't always want to look at he top left corner for this: 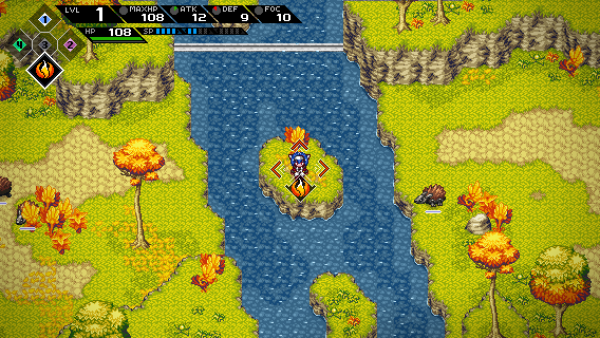 The new menu is the options menu, that's right! For the first time you can set options in CrossCode. And we don't just talk fullscreen and volume here. Instead we wanted to add more options so players can adjust the game in case they don't like a particular setting. Here are two screens of the menu: 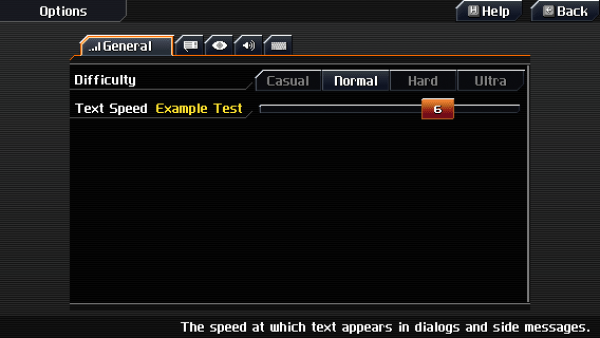 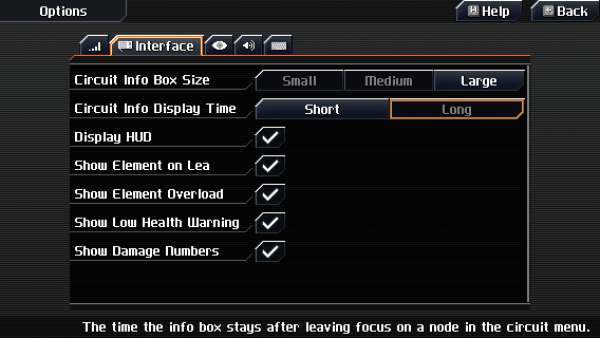 As you can see, we divided our options into 5 major categories: General, Interface, Video, Audio and Controls. Options are based on a very flexible system that allows us to simply create a new option and automatically have it added into the menu and your save file. We'll add more options as we go and we're also happy to hear from you what option CrossCode might need.

With this we also want to announce that you will have the ability to change your keyboard keys! (You already guessed that from the category thing huh?)

The plot is coming along very nicely. In fact, so nicely that we kinda finished the rough implementation of everything that is going to happen on the cargo ship. Yep, we did it. Of course we still want to tweak things (like adding sounds) so we're not really done here. But it feels good to have the basics finished. This means we'll move to a new area that will also be part of the demo version.
We don't want to spoil anything from the new scenes but we still have a little teaser for you right here: 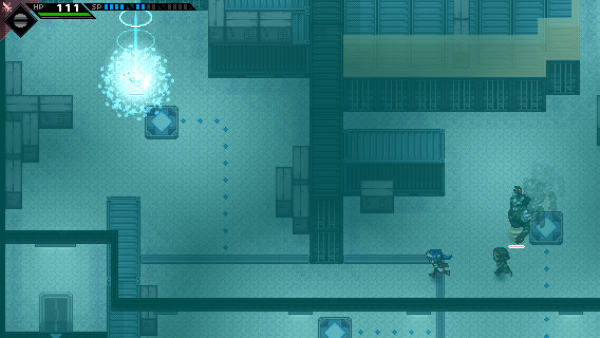 Right, we're not done yet. First, we started to work on balancing the game in more detail. This means we created huge tables of numbers that will hopefully help us in correctly balancing the game. We even detailed how equipment will influence your stats over the course of the game. It will still need lots of testing but it sure shows us how we need to scale enemy stats to keep the same difficulty level.
Secondly, we planned our next CrossWeek! Again we will all get together for a whole week so we can develop the hell out of CrossCode. It will happen next month and we already decided on a topic we will focus on during the week: The new area for the demo version! So expect some good progress on the plot again during the CrossWeek.

And with this, we came to the end of this update. Hope you liked it!

Awesome news once again thanks for the update :)

It will be great for you all to get together for a week and develop!
I love the charging animation and of course the landscape.
Keep up the hard work and thanks for the updates!