Since last time we have extended the plot with our very first action cutscenes (also featuring a new character), implemented a first prototype of the save system, worked on a concept for the new map menu, create first graphics for new enemies and more! Also, connected to that was a lot of engine work and a very successful application of MATH.

We're back with another update!

Since last time we have extended the plot with our very first action cutscenes (also featuring a new character), implemented a first prototype of the save system, worked on a concept for the new map menu, create first graphics for new enemies and more! Also, connected to that was a lot of engine work and a very successful application of MATH.

The story of CrossCode continues and here is a first preview of what's to come: 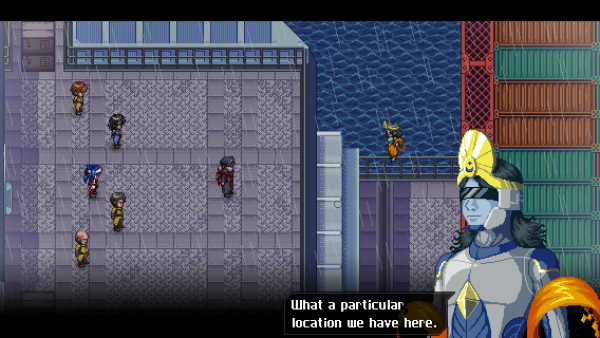 Not only did we add this new character (nope, no more information on this guy :P), Felix also added a couple of new features to create those new fast-paced cutscenes. Firstly, he implemented a zoom feature to get the view closer to the action. We will not only use this in cutscenes but also in certain gameplay situations.

I dramatically improved the whole floating physics of the game, harnessing the full potential of (basic) math! Well... You see, floating physics have been around for quite some time, but they have always been kinda hacked. I tweaked values around, adapting the acceleration of the z velocity in strange ways to make it work for specific use cases - and this always broke later on when new use cases emerged. So, after realizing this doesn't go anywhere I finally sat down, remembered the math I had years ago, did all the derivatives, solved integrals like a boss and finally found the one solution... that worked instantly!!

... Okay, sorry if I'm derailing a bit here, but man, that was one awesome math moment for me. I'd also be happy to share my findings if people are interested *hint* *hint*.

CrossCode will be an Action RPG with at least 10 hours of play time. Of course you'll need to be able to save your progress. So it's about time we add a proper save menu to the game. Felix spent a little time, polishing the already existing save system e.g. to properly store the currently played music. I then extended the system to support multiple save slots. Then, I went on and created a very "simple" save menu for debugging purpose: 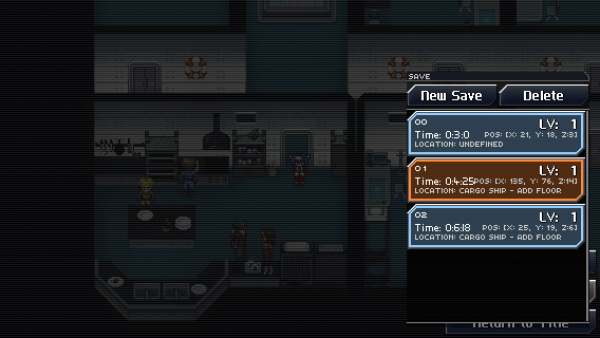 Remember that this is only a first prototype which is used for development (saving is such a great feature for testing). The actual save menu will probably look much better. And we will do it soon.

We made even more progress with the menu. The next big thing will be the map menu which provides an overview over the current area as well as the whole world map.

After I did a first layout proposal, Felix followed with an initial design concept: 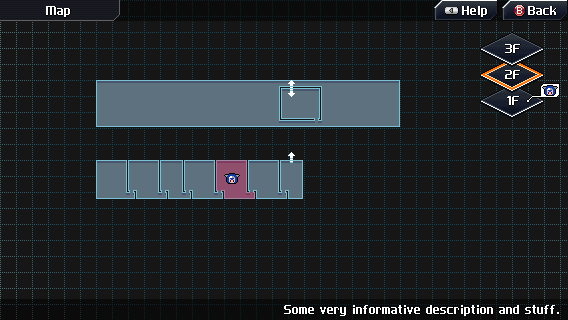 I already started working on the implementation, so hopefully we'll have some actual running map menu sometime soon (though it will be more work than the item menu).

Some other internal stuff, also done by myself, was a refactoring of the buff structures and the implementation of an item editor, used to edit the item definitions of CrossCode (there will be plenty of items, yes). Here's a screen cap of the item editor: 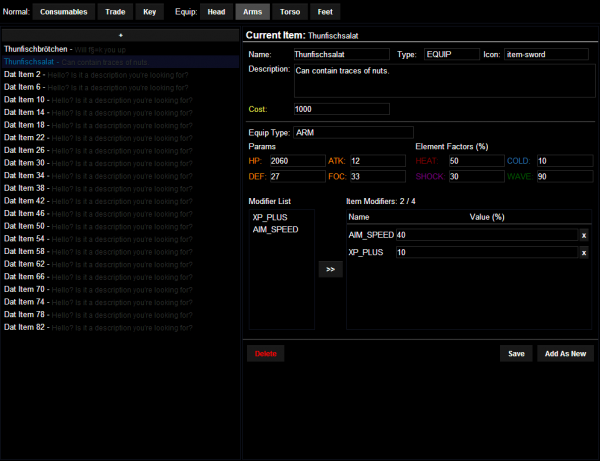 Our new grinding area needs new enemies! T-Free started working on the graphics. They look like this:

Surely you can't wait to brutally beat them down with balls.

Then we have Teekuh who added more graphics to the grinding area, such as this amazing tree: 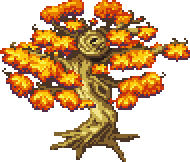 Also, Frece is producing a crapload of concept art. No seriously, we could just post at least 6 images here, but we'd be terribly spoiling things. So here have another concept art of the grinding area featuring some new buildings we still plan to add: 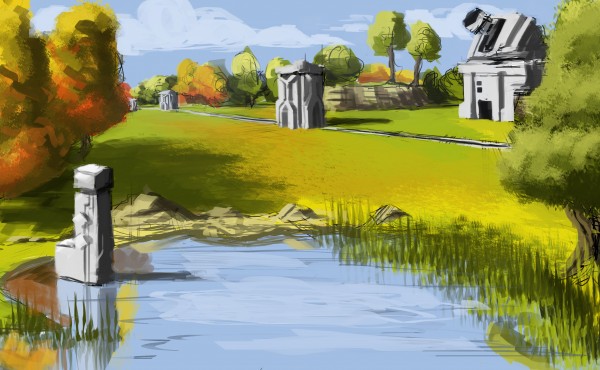 And finally, Intero is working on the soundtrack. Being the perfectionist he is, he's currently remixing several old tracks. The new versions do sound really nice, though!

So, plenty of stuff going on.

Until next time, fellas! 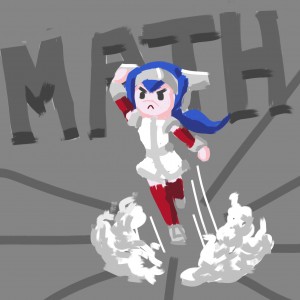 This is looking cool. Tracked!

I actually really like the look of that save menu, it's minimal and simplistic. maybe that's just me though.