We updated the CrossCode Demo! The new version fixes several bugs and has small improvements here and there. You can find the new version in our newly revamped webpage! Check it out!

The important thing first: we finally updated the CrossCode Demo! The new version fixes several bugs and has small improvements here and there.
You can find the new version in our newly revamped webpage:

Of course you can also download the newest version here on IndieDB!

Also, we finally got a proper trailer:

(some artifacts going on there, we might upload a better version soon)

Kudos to Taifuuni Advertising, who helped us a lot putting this trailer together!

So what changed in the new version? Just read on!

So we'd like to get one thing out of the way first, because it's kinda urgent:

If you do like CrossCode and you'd like to support us, please consider voting CrossCode for "Indie of the Year 2014" at IndieDB! Just go back to the main page and press the red button!
We'd very much appreciate it. Note, that the vote only lasts about two more days!

So after the long crunch time we had the week before the release, some of us actually thought we'd be finally able to relax a bit. We thought wrong. This is what happened: 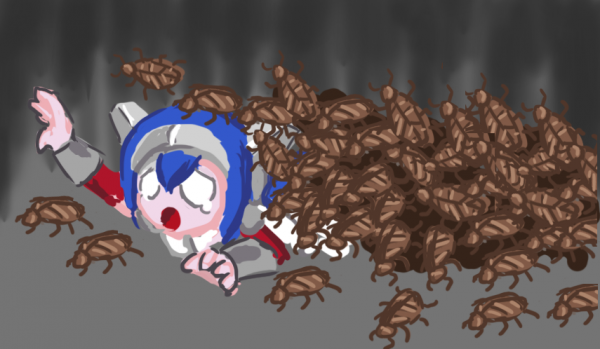 Like... so many of them! Well, that's to be expected when you only have a very short beta test and add way too much content and features on the day of the release.

Or in other words: we're sorry for the buggy release and are really humbled that so many of you still enjoyed the game. And also we want to say a big thank you to all the people who sent us these detailed bug reports! Thanks to your help we managed to fix a lot of the problems.

Here is a short (incomplete) list of things that have been (hopefully) fixed:

So apart from all these fixes, the new version also has a couple of changes:

Overall, we're quite content with the reception (especially considering all the bugs). CrossCode also has been featured in several videos and webpages. Here a short list:

...and we didn't really reach out to the press yet. Wow! That's what we plan to do next.

Apart from more bugfixes (there will most likely be some bugs left in this version, so keep the bug reports coming), we now have to prepare for our big Crowdfunding Campaign in February 2015.

You can expect an extended demo (like a Demo++) to be released around that date as well. And what will be new in this version? We still need to plan this. But most likely there will be more puzzle content and more interesting stuff to do in the Exploration part. Maybe even a bit more plot. That depends on how much time we'll find in the next two month.

And that's all we can report for now!
Again, a huge thank you to everyone playing our game, submitting bug reports and giving valuable feedback! We wouldn't have come so far with CrossCode without your support. :D

Until the next update!

I'm running the standalone on a Vista x32 and yet the first demo ran noticeably better (I'd say 60 FPS) while here the FPS is all over the place (jumping from 60 to 30 and below non-stop)...

Could you try something?

Please remove or rename the files "D3DCompiler_43.dll" and "D3DX9_43.dll", located in the same folder as "crosscode-demo.exe".

Does this improve anything?

Okay, it's good to hear that it helps.
On the other hand this might be troublesome. It could be that those .dlls fix problems on other machines - maybe. We still need to get feedback for that, actually.

I just hope we can figure out a solution that works for everyone, eventually.

I have also experienced massive fps drop and this fixes it.