Updated July 28! - This mod adds several elements from the Elder Scrolls Universe to Civilization V (the Gods and Kings and Brave New World expansions are required). 13 Civilizations 13 Religions Numerous Pantheon, Follower, Found, Enhancer, and Reformation Beliefs 24 City-States 3 Natural Wonders Dwemer Ruins TES Resources TES Eras Be the first to found the Elder Council and start down the path to becoming the Emperor of Tamriel Use the included Tamriel maps and start in True Start Locations (by clicking "Load Scenario", Prince Difficulty, Standard Speed or Marathon Speed) *Couple of pointers: Trade Routes are essential, Haymon Camoran will irritate you, and most of all, don't pick a fight with the Ayleids :)

This mod adds several elements from the Elder Scrolls Universe:

*Couple of pointers: Trade Routes are essential, Haymon Camoran will irritate you, and most of all, don't pick a fight with The Ayleids :)As always, if you enjoy this mod, please rate it up! :)[h1]Updates[/h1]

[h1]Download Instructions[/h1] Up at the top of the page, (under the screenshots), look for the green subscribe button, click it. Then open up Civilization V, click on Mods, Click Accept, now wait for a second and then look for The Elder Scrolls Civilization Pack to appear, click on the check mark next to it and make sure it lights up green to enable the mod, look at the bottom and click next. Now you will see it under Mods In Use, click Single Player (at top), Click Set Up game (at top), choose a civ, and click Start Game*** If the mod won't download, try:

Not hard, but still a little bit of a hassle. **This only happens when first starting a new game, you can load you saved games normally without doing this!** [h1]Special thanks[/h1]Jediravenclaw for creating the leader screens and Dawn of Man screens for Elsweyr, Orisinium, Morrowind, Valnewood, and High Rock![h1]Requires the *Brave New World* and *Gods and Kings* expansions[/h1][h1]Links[/h1]Click here for the Gods and Kings Version of the ModClick here for the Vanilla version of the modDownload from CivFanatics (If you're a Mac user, this is you!)ModDB HomepageCivFanatics Forums Discussion Thread 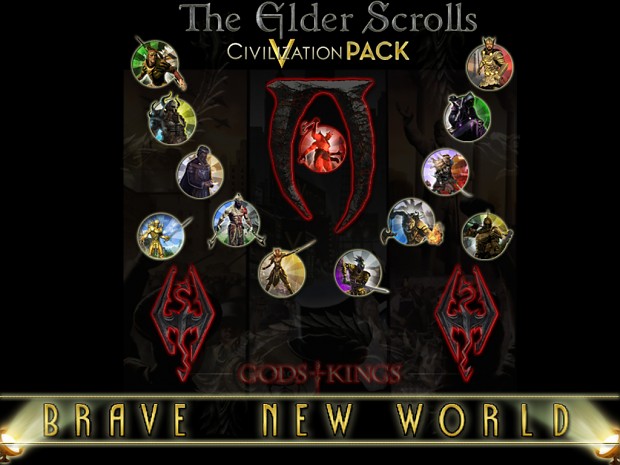 ok its not clear to me but i cant check the mod in the mod list in game. says something like missing required dependencies. any clue?