Tatooine At War is a huge map for Battlefront II which combines Mos Eisley, Jabba's Palace and many more places into one large map. You can even fight in space or just battle your enemies on ground. There is much to explore and to see. Many assets are stock (edited), self-made, some assets were made by other modders but there are also assets from Battlefront III (cancelled game) such as Tie Fighter Models, Rebel Fighters, Player Models (Boba Fett and Han Solo) and HD weapon models. In this version I fixed as many bugs as possible and also re-enabled Multiplayer! 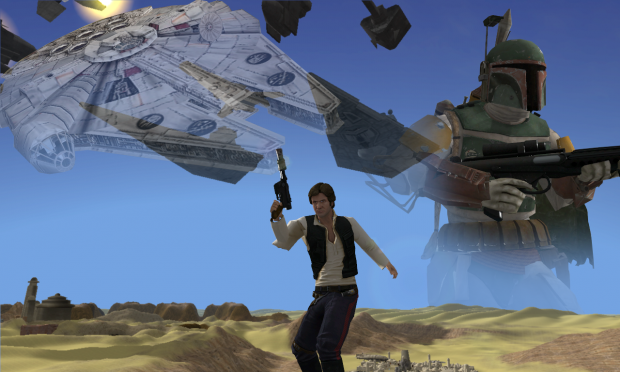 This map can be installed like any other map you download.
Create a folder called "Addon" in your gamedata's folder, put the folder TAW into this folder (qaddon) and then run your game. To get all eras and modes you will addionally have to install Patch 1.3 (Only if you didn't already).

please where can I get the patch 1.3

Search it up Unofficial 1.3 patch

Hey man, I downloaded it but when I put in in my folder it just caused my game to crash. I took it out and my game worked again. How can I fix this problem?

It's probably because the game cannot run the map, if you have other large maps, delete them

How do you make maps?? I want to try to make one. Anyone Know??

Remove something from your hard drive. Looks like you ran out of space.

Re-install this mod. It may be a corrupted install.

I know it's a bit late but i have an issue like yours with other mods.
I try to unrar some files in the E disk and it's says me i don't have space and my C disk was full.
Everytime you unrar a file it unrar in the temp too so look about it
(w+r %temp%)

hello I have problem or remove the file I get 8 errors
someone does the same thing happened more than ami?

Hi for some reason the file seems to not have any download mirrors which means i cannot download it.

Who else spotted Jar Jar Binks in carbonite? ;)

Where?
Disen berry berry bombad map. I haven't explore them all.

Which hero do you mean? I think Han Solo looks great since he was made for the new, cancelled Battlefront.

Is this map multiplayer?

When I download its not a folder, its a file. Where do i have to put the file?

Make sure you use 7zip to extract all the needed files.

So, I have a REALLY irritating issue. I've tested this multiple times. I do have other maps, but this was the first map I ever downloaded, and it still had this exact issue. I actually downloaded other maps to attempt to replace this one, but, alas, this map is just too good.

Anyways, about 90% of the time, the map will crash to desktop once one of the teams loses about 400 or so tickets on conquest. This is making it unplayable since it immediately disrupts the play list, seeing as it crashes the entire game.

Did you install this map correctly? >Gamedata/Addon?

Have you also successfully installed the unoffical patch 1.3?

Do other maps or mods work for you?

If you don't have unofficial patch 1.3 get it that should stop the crashes.

How exactly do I download a mod? I have no idea, never done this before. Help?

It doesn't show up, I created a new profile and I put the mod in the right place gamedata>addon, but its not there. I have the 2.2 conversion pack, is that whats conflicting?? Thanks in advance.

Make sure you installed the map correctly and are also using the latest version of Patch 1.3.

If you have many map and many mission (more than 500) some map/mod won't work/appear.

For those having trouble downloading this mod, this download is a zip file that you have to extract into whatever. Inside that extracted folder is a folder titled "TAW". Copy that folder and put it in the addon folder of your GameData folder for your BFII game. You should also download the unofficial v1.3 r129 patch if you haven't already.

It's a pretty awesome map, but every time I play Conquest, It would only be a matter of time (4 - 6 minutes of playing) before my game would crash! And it sucks because Conquest is my favorite mode to play with this map. Is there any fix for this?

Why is the millennium falcon so weak and fragile? It seems like it has as much health and does the same amount of damage as a regular fighter, which is not loyal to the actual falcon. lol Is there a way that you can buff up the health and damage?

Where can I find it? I put it at the GameData past, how can I know if it works? (Good work, that mod is badass)

I found it, tnks anyway!