What would NATO look like in the 1930s? This Mod makes an entirely new Faction in place of the Allies from the get go that is entirely hypothetical considering the political landscape of what NATO may look like in the 30s. NATO consists of 17 Nations that are members of NATO today with the exceptions being Facist nations, those who are annexed by 1939 (Czechoslovakia and Albania) and those who will change politically (Spain and Romania). Member's of NATO are as follows: United Kingdom (as Leader), France, Portugal, Luxembourg, Belgium, The Netherlands, Poland, Latvia, Lithuanian, Estonia, Norway, Denmark, Bulgaria, Greece, Turkey, Canada and The United States. Other nations where not added because they either don't exist today (Yugoslavia) or are not members of NATO (Ireland, Switzerland, Sweden and Finland). This mod opens up new Gameplay that mixes things up so I hope you have fun either trying to best the NATO beast or crush everything in your path. Note: This Mod removes Puppets. 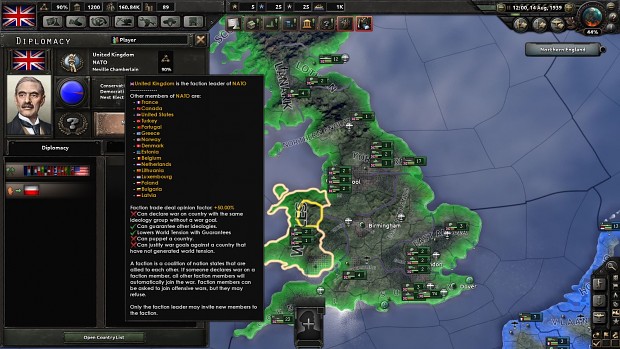