This is the same mod as the other upload, but with the new Memory Editing Tool pre-installed - it's required on windows 10 or all the giant heroes are prone to crash to the desktop (CTD) - the other version doesn't use the tool and works perfectly fine on Windows 7 which I am using. This tool has fixed giants in Third Age DIC, Warcraft: Total War etc - so even on windows 7 it might make battles more stable. However, I do believe that with the Win 7 version it's easier to start the mod as firewalls/security programs of Win 10 might treat the tool as a virus - as such you should de-activate your firewall/security programs or make an exception for the tool if it's treated as a virus - which it is not. It's a tool that modifies the games .EXE while the game is running. Such tools are often mistaken for viruses by modern windows security. With this tool you still do need to isntall the mod like written int he installation-article - but now You'll also need to start the mod through the tool.

This is the same mod as the other upload, but with the new Memory Editing Tool pre-installed - it's required on windows 10 or all the giant heroes are prone to crash to the desktop (CTD) - the other version doesn't use the tool and works mostly fine on Windows 7 which I am using.

This tool has fixed the giants in Third Age DIC, Warcraft: Total War etc - even on windows 7 it might make battles more stable as certain battles do crash on 7 as well - but not due to the giants. However, I do believe that with the Win 7 version it's easier to start the mod as firewalls/security programs of Win 10 might treat the tool as a virus - as such you should de-activate your firewall/security programs or make an exception for the tool if it's treated as a virus by your security - which it is not.

It's a tool that modifies the games .EXE while the game is running. Such tools are often mistaken for viruses by modern windows security. With this tool you'd still need to install the mod like written in the installation-article - but now you'll also need to start the mod through the tool.

I'm going to upload a video on how to do this, which is very easy - and I'm also gonna write an article about the latest release and the tool. To use the tool you just need to right-click the tools .exe with your mouse and run the tool as an administrator. Then the UI of the tool should be pretty self-explanatory. I would suggest not to use all the features of the tool due to the game becoming less stable the more features you are using. The features I'd use are the ones I think will be activated for you as well.

You can place ancillaries at 32 only if you wish to modify the mod and add more ancillaries to each character - the old limit was 8, you can place religions at 12 if you want more religions - the old number was 10 - otherwise I'd suggest not to use these as they might still affect the mod negatively as they are increasing the limits of the game. These options might be activated from the start so you could return them to 10 and 8 respectively if you want to. There is a button named "Click Me" - if you click on it you'll get information about the program, things you shouldn't do unless you want a crash and shortcuts to certain features like for example being able to zoom-out enormously on the map, highligting all the troops and other stuff. You do need to place the anti-aliasing through the tools UI before starting up the mod - place it at 8 for the maximum quality. If you change this inside of the game using the tool the game is going to crash.

On the right-side of the tools UI are many options - I would only have a few activated - those are "berserks-fix" which will enable to berserker ability from Rome: Total War to work on the units - you'll just have to hand out the "berserk"-attribute to the units you wish to go berserk - in the vanilla Medieval 2 mod this attribute would crash as soon as the units entered a battle - this feature will be useful in Viking-based mod and for the Uruk-Hai Berserkers in Third Age I am sure, then I would activate the "Unlock Console Command" - which will enable all the conole command codes in the mod and finally I would activate the "creatures-fix" which will fix the skeleton of all the elephant-based units in the mod - such as Fi, Ghirahim, Ganon, Demise, majora himself etc - this is the main feature I wanted in this mod due to players reporting that units like Majora and Fi have crashed for them during battle immediately upon starting the battle.This fix will make it possible to play with all these units in both the campaign and in the custom battles. If you play custom you can have an army of Majora's versus an army of Ghirahim's or Demise's - the point is that giants will no longer crash to the desktop. I'm pretty sure that other reasons for CTD during battle will be fixed as well

Credit for the tool should be given to youneuoy and Jojo00182. 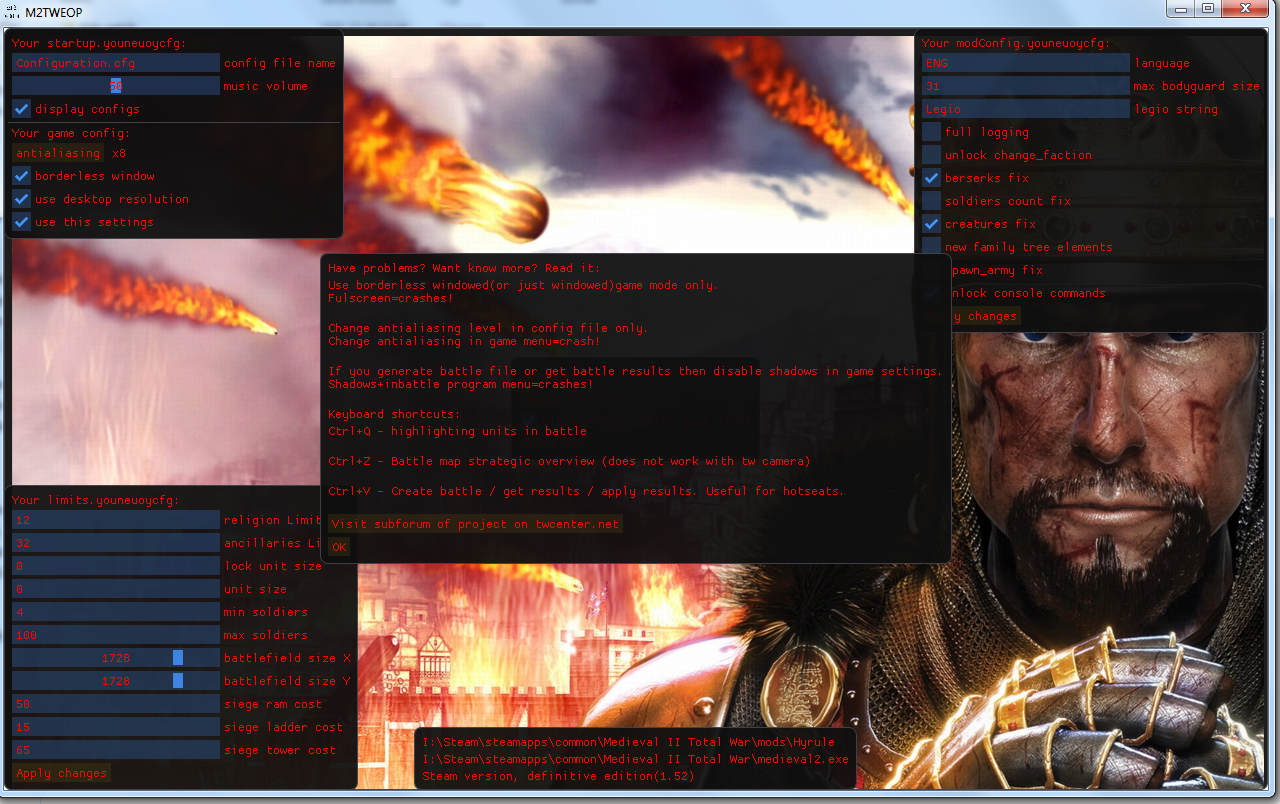 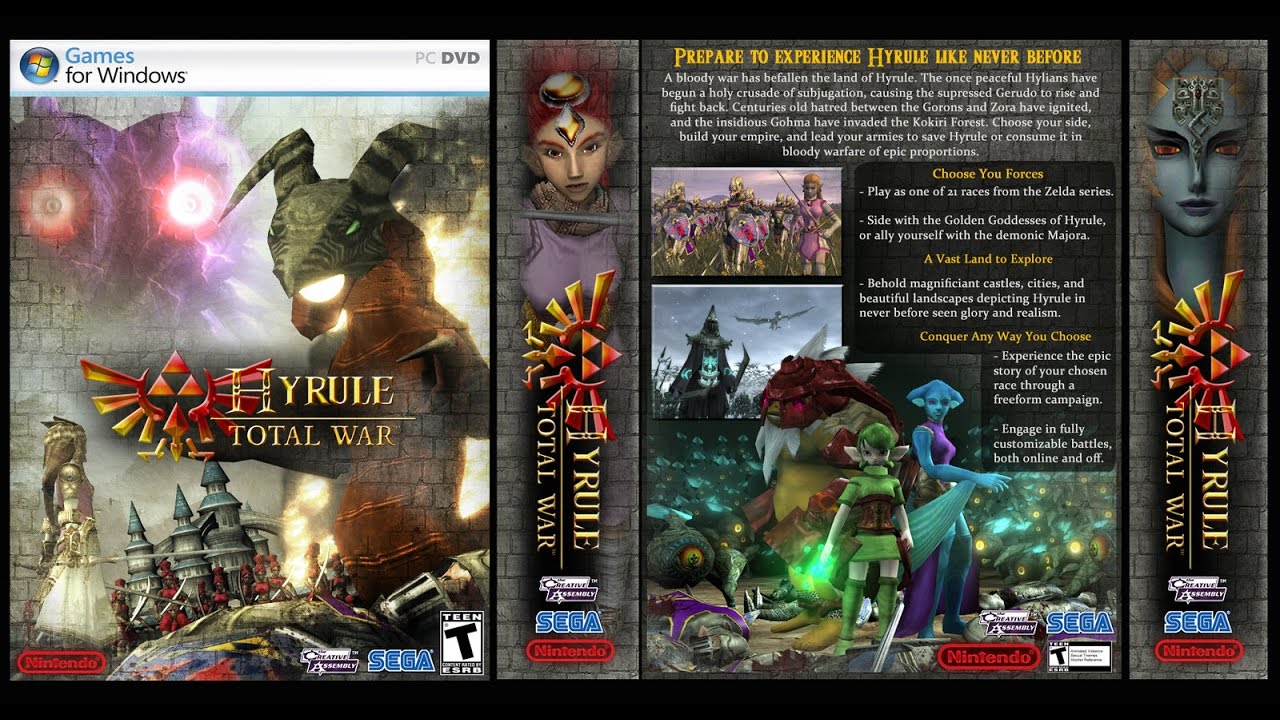 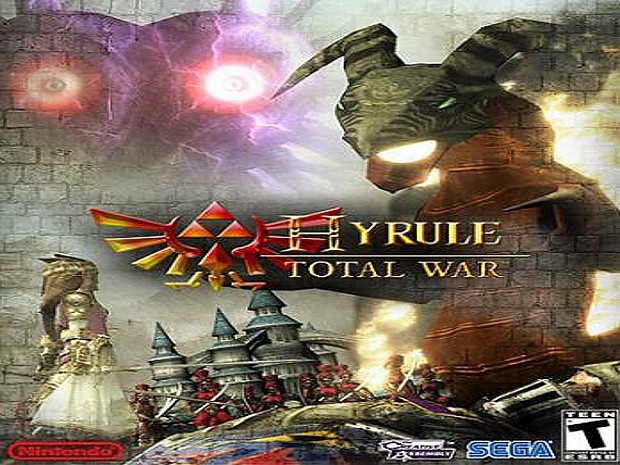 Are there any tipps for CTDs?I cant get to the game and receive crashes all the time?

Read the installation article thank you.

EDIT as of 2020-12-03 - I've re-uploaded the mod with the new updated version of the M2TWEOP-tool - try re-downloading the mod again as the new version should not have the issue with Steam on Windows 10.

"Many stability issues have been fixed, new features have been added. The list of changes will be when the creator of the tool finish version 1.19.

Some of the changes from this patch:

1. Added an option that allows you to simply run the mod without opening the program window.

2. Spawn_army fix now works for the console command spawn_character, and now the army that appears will block the port if it is enemy.

3. The game will no longer crash when changing settings for resolution, anti-aliasing, etc.

4. The program now correctly detects the monitor resolution
and much more."

Btw guys, don't forget to leave a review of the mod if you enjoy it - and vote for it in the MOD of the Year competition.

The only CTD i experience is after a while of gaming, maybe 15-30 min, if i click on "Close" on whatever scroll it will just randomly crash, sometimes the UI looks messed up and sometimes not, fun mod tho.

That's an issue that usually happens in the hotseat-campaigns and never in the single-player campaigns - at least not for me. It shouldn't happen if you play a single faction in hotseat.

If you play more than one faction it could happen quite often, but it usually just means the mod will crash and then after you start it up again you can continue.

It's very important to save before and after every battle so you don't need to replay stuff.

The issue is a User Interface-glitch that happens randomly - the mod can't handle the switching of factions too well.

are load times faster than 4.6?

Yes, I've specifically added a script that will speed up the load times or turns when the AI is making their moves.

The loading when starting the campaign is slow because there is a lot to load.

They are slow when starting a campaign as explained, very slow - might take 2 minutes.

However, load-times from battle to the map or from the map to a battle is pretty fast.

When installing the game after Extracting the Hyrule folder and running the 2 patch files my M2tweop file disappears and when trying to extract the file again windows 10 will not let me run it or install it even using administrator commands saying that it is detected as a virus and then deletes the file. So I am unable to launch the mode on windows 10

Question! If I download this file, is it necessary to download the Gerudo Mission Package, the cinematics, etc?

You do not need to download the Gerudo Missions Package as it's now included within the main download.

All the campaign-cinematics are needed to be downloaded separately if you want intro, win and defeat-videos.

Great work on the mod!

It has been running well, with the exception of one major issue; no matter what I set the resolution to, the size of the program does not change.

Currently have a 1440 monitor and try as I may to set the resolution to 1440, it seems to remain and 1080 and only covers a portion of my screen. I've read your installation article though haven't been able to see any solution to this.

If it is then the only way to fix it is by doing what's written in the article - or it's probably not possible.

so idk if im the only one that had this problem with the older version(s), but in custom battles it seemed that all armies had infinite morale. im just making this comment to see if it was intentional or if it was actually a bug that got fixed (hopefully)

edit: just wanted to add that i tested another mod for this (third age: reforged to be specific) and it seemed that hyrule total war was the only one that had this.

Hello, morale is something that can be modified in the EDU (export_descr_units)-file and in my older versions I had given all of the factions unlimited morale because I disliked how they would run away in battles with half the army still standing.

In the latest releases that are available now only the Stalfos has unlimited morale. Maybe some bodyguard units have it as well in other factions. And any constructs such as the armos.

Ik im late, but thank you for the response. I am now having another problem tho.

It seems that now when i start a campaign and go past the first turn, i get banners for news talking about stuff happening in other factions then the one im playing (like new characters getting recruited and the intro banners for every faction.) im not sure why its doing it.

That's intended, because when the mod had this de-activated like Neph had made it - the later heroes would never spawn for the AI.

The only way to enable hero-spawns for the AI-controlled factions during the campaign was by enabling the events for the AI as well - resulting in every starting spawning event happening on turn 2.

If it's de-activated the heroes will not spawn for the AI later such as Ganondorf.

Hello, I can't get the mod to work: I get a "uh oh this isn't good" whenever I am trying to launch the mod using the .bat. Any idea on how to fix that? I believe to have followed all the steps you indicated.