Windows 64-bit Empires of the Undergrowth is a simulation strategy game hybrid where you control an ant colony, excavating a nest underground and taking on large insects, arachnids and other colonies on the surface! In this test demo you will be able to explore underground, collect food, raise a small colony and protect your queen against troublesome beetle larvae. Note that this is a test build - there are still a lot of creases to iron out so please be patient and let us know if you spot any bugs (no pun intended). 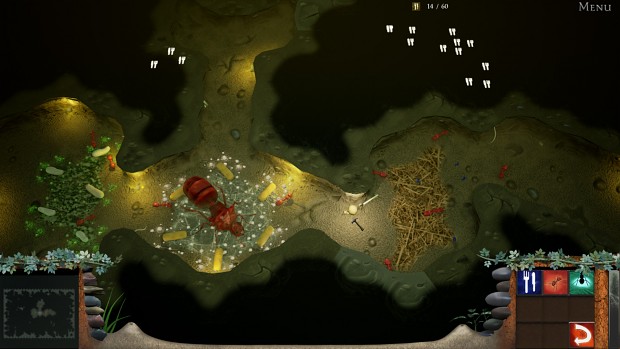 I had the optimal setup allowing for 120 black ants. Still couldn't beat the final wave of 7 of them.

Numbers are not the key - the way you construct your base and the order you attack the beetle larvae is. Also, 120 black ants doesn't allow you to repspawn any of them I imagine, given the food cost in creating the tile.

Don't know where to place my feedback, so.. please don't hurt me if it is wrong to post it here.

++Suggestions:
- add active pause (or option to enable it)
- underground: restrict visible hints (where is the food, enemies) to smaller area (few tiles around known teritory)
- higher contrast of colours
- underground: possibility to zoom out more
- autopause should trigger after using Alt+Tab
- remove 'cage cursor' when game is in windowed mode
- allow players to pan camera with Right Mouse Button or MMB -> it is hard to scroll when game is in windowed mode
- blue drops (food) could be root aphids

- maybe you could add some hints/interesting facts about ants in game? :P

++Bugs (priority from A1-important to B):
A1 - progression break - my all workers stuck in one spot by the entrance to hallaway; new ants were not born, so I was unable to dig new path around them. See screenshot - Flic.kr
B - soldiers patrol only nearest area where they last stopped, do not patrol the nest as it was described (I know, it is still alpha)
B that is a result of previous B-bug - it takes a lot of time for soldiers to reach enemy in other parts of the underground. In this time most of my workers is killed by an enemy
A3 - Windowed mode works horrifying; double-clicking on upper game bar (where the icon and title of the game is displayed) often moves the game window down instead of resizing it to reach screen corners; panning camera by mousing by the corners works very rarely; cursor is caged inside the game
A2 - workers shouldn't run through the enemy just to gather the food behind it, because they die after single attack. Ants do not work like that. Possible solution - first worker which is killed after reaching an enemy should trigger a signal/warning (for example in few cells around her; you know - pheromons or something) for other workers to not come closer, even causng them to run away (may be even chaotically, for a duration)


At the very begginning of the game three balck-long-somethings attacked my tiny colony (less thatn 20 workers). I had only few soldiers, however new ants were born so quickly it didnt mattered that enemies killed almost every of my 20 ants, because they were immediately replaced (if there still was enough food). It didn't feel right.
3 possible solutions:
1) give workers ability to attack in defense with minimal dmg/ retaliation - they will die quickly but at least player will see that they defend instead of mindlessly collect food when attacked (read the note by A2 bug)
2) black-long-something could have less health but more powerfull attacks
3) hatching could last a bit longer

As an ant keeper I can tell you that there is always more workers (minor and media) than soldiers (or majors) - in case of my Camponotus herculeanus colony it's something like 1 soldier for ~10 workers. They appear early in the nest and they are used as storages for food.

The main goal of the colony (except of surviving) is to generate sexual individuals (in most cases, because in most of species only queen and males can reproduce) not to maintain a specific area - I hope that you will take it into account :P It takes a lot of resources and time to reach that stadium (even few years) - some species are able to 'generate' only several 'sex-individuals' others go in hundreds.

yep, another ant keeper following this game? I though i was the only one :D

my computer is blocking the file to download it.

Try downloading on GameJolt or Itch.io, or look at your windows smart screen settings

this game is ruddy brilliant! it works so well slug disco im supporting you can you make one about kitties?

no offense but slug disco should add humans

I cannot properly download it right. I can download EOTU sure, but when i try to run the app, it tells me i'm missing the component in order to run it, "Microsoft Visual c++" And from there i downloaded that, and now i have no idea where to go from here. Can someone please help me?

look it up, it should be on microsofts website

Hey, I have a question! How do I play the game? I downloaded it as a zip-file and after I "un-zipped" (I don't know the exact term) it, I just had a bunch of other files. I can't seem to find anything.

EotUUGTest0.025>EotU.exe hope it helps. For future reference, .exe files is the program/game :)

Oh, of course! Thank you!! It really helped me out

This is probably a stupid question, but is there any way for me to run this in DX9? I love ants and would do anything to be able to play this game

Okay so I downloaded it and it took 20 mins, after it was downloaded NOTHING showed up, so I went into the folder and found it was zipped, I extracted everything, and still nothing I don't know what to do, I am not the best with computers either, PLEASE SOME HELP!