CC3: WESTERN FRONT January 2007 Version 10 Thank you for downloading this modification to CC3: Cross of Iron. The Western Front mod (WF) is a major work that took over a year to complete and two years to get to version 9.1, which came five years before this update - Version 10, inspired by the re-release of the Close Combat series. This mod depicts the Western Front conflict from June 1944 to May 1945. The mod replaces all Russian teams with British and U.S. forces. As well, German units have been altered to reflect the composition of Western Front forces. Many new German troops and vehicles have been added. There is one WF campaign called Assault on Europe. The campaign is somewhat dated but many of the maps still hold up well, including the excellent Omaha map where the fighting starts (the map is included in the main mod download.)

WHAT'S NEW IN WF10:
1. Allied vehicles are a more consistent olive drab color, and some winterized vehicle graphics on both sides are improved.
2. Variations of Allied tanks like the Sherman and Churchill (flamethrowing or bunker-busting tanks) have a white star on the turrets to make them easier to pick out from their less lethal brothers on the field.
3. Wasp flame vehicle has its own unique graphics to differentiate it from the standard universal carrier.
4. Comet tank is added (non-rarity play)
5. An AT gun is no longer in the German deployable bunker, and the MG34 has been replaced by an MG42. This should keep the bunker from dominating the field beyond fair gameplay, but it will still be devastating for infantry.
6. Air strike animations have been slowed, and the direction of the flybys are from the top to the bottom of maps. The new direction should ensure that players see the animations, since the aircraft will likely travel roughly along the frontline where players are most likely to be watching the action. Aircraft attacks may cause a game performance hit temporarily on slower machines.
7. Team descriptions are cleaned up for grammatical, typographical and factual errors.
8. Infiltration troops (Germans troops dressed as American troops at the Battle of the Bulge) have zero rarity values because these troops are largely there for fun and have no serious game value.
9. British and American uniform colors are overhauled, using the Close Combat 2 RGB values.
10. Firefly and M12 graphics are improved.
11. Graphics for the German 2cm-gun light halftrack (SdKfz 250/9), captured French tanks, PzIV mineroller and Sturmtiger are overhauled and/or recolored (no more grey tanks).
12. The D-Day Duplex Drive Sherman has graphics to represent the flotation screen.
13. AT power of some German guns is upped to more appropriate lethality.
14. Two Allies voice cues are replaced; "bailing out" and "enemy spotted" were imported from CC5.
15. M10, M36 and Achilles hull graphics are reduced to a size more appropriate to the CC scale.
16. Some minor interface improvements include an improved American flag, main menu text that is easier to read, more consistent coloring for Allies unit icons and a new splash screen.
17. Smoke animation sizes are increased for all weapons. While CC3 smoke appears largely ineffective (at least in H2H play), the larger smoke animations in WF will obscure the player's visual reference.
18. PIAT rounds no longer give off a back blast (historical correction that should make units with this weapon tougher to spot)
19. German machine gun units are in the support requisition list instead of the infantry list.
20. The Hetzer flame tank has graphics that are distinct from the Hetzer tank destroyer.
21. Rifle grenades have their own weapon icon.
22. British AB rifle teams are armed with PIATs.
23. The number of anti-personnel grenade rounds on German tanks (Nahverteidigungswaffe) are reduced.
24. Data for some vehicles and guns are recalculated for historical accuracy.
25. Explosion effects have been increased in size for large weapons.
26. British 3-inch mortar shells now have explosion effects (bug fix).
27. Mortar batteries are available only in non-rarity play.

WHAT'S NEW IN WF9.1:
1. Rarity data is tweaked.
2. Sherman, Churchill VII and Pershing armor data is altered for accuracy.
3. AI should now pick better locations for German deployable pillbox (i.e. not behind hills).
4. Team names and descriptions are cleaned up further.
5. Halftacks are added to British lineup.
6. Tank crews no longer have rifles.
7. Some minor graphic improvements are implemented (Captured Sherman, Cromwell).
8. Soldiers now deploy onto hedges rather than behind, resolving LOS problems - thanks to Zeppo9 for altering the Elements.txt file for this improvement.

CHANGES IN WF9.0 TEST PATCH:
1. British forces are separated from American units in rarity play. British now have a general summer rarity, while American timeline goes from D-Day to the end of war as in previous WF versions.
2. Rarity data reflect a stepped-up American focus. Many German tanks are now not available until after or late Normandy. U.S. rarities are tweaked for historical purposes as well.
3. Captured French Renault R-35 is in the German roster for Normandy.
4. Osttruppen team is the game (Normandy).
5. Engineer units are in U.S. and British lineup.
6. Bazookas and PIATs in infantry squads rarely fire at infantry.
7. Airstrike observer and mortar batteries are in the British lineup.
8. Airstrikes are slightly more accurate.
9. Airstrike observers are harder to spot.
10. Ferdinand is removed from the game.
11. Snipers are no longer in German infantry squads.
12. Many German team names and descriptions are cleaned up.
13. German flak guns no longer produce an explosion.
14. Commander names are Model and Bradley.
15. U.S. Airborne troops are equipped with gammon bombs.
16. Snipers are deadlier.
17. Easy Eight and M4A3-76 are now a generic M4A3-76.
18. Sherman 76 command tank is added.
19. Pershing is recolored.
20. British 3-inch mortar has a more appropriate explosion graphic.

NOTES ON THE MOD:
Although there has been an effort to include many British units in WF, the main focus is U.S. forces. So rarity settings are such that there is one rarity setting (summer 1944) when British units show up. In non-rarity play (see scenario maker options), all teams (British, American and German) show up in the requisition screen for selection before a battle. Also in non-rarity play, indirect fire units such as the Sherman Calliope and Sturmtiger show up (look for INDIRECT FIRE in all caps under "elite, support" in the requisition window).You will have to babysit these units when their indirect rounds are spent, to make sure they keep firing direct weapons such as machine guns at the enemy. In rarity play, these units use only direct fire. PLAYERS WHO WANT HISTORICALLY ACCURATE UNITS SHOULD PLAY WITH THE RARITY OPTION ON.

You will find mortar batteries (three mortars in a single unit) for Allied and German forces, available when rarity is off.

Observers who call in air strikes are in the game but there has been mixed reaction to these units from players who have tried earlier versions of WF. Before online play, it might be a good idea for players to agree on whether they will use these teams, which are cheaply purchased but can be deadly. Observers can be selected under the command menu in the requisition screen. These teams act like commanders. Also, take note that aircraft graphics were added to WF (a first for CC3 and all its mods) through editing of explosion files. The end result is a decreased range of explosion sizes available in the game for regular gameplay (a graphical effect only).

MAPS:
Except for the campaign start map, Omaha, maps are not included in the WF download. Many CC3 user-made maps, for the WF campaign Assault on Europe or user-made battles, can be found at www.closecombat.org..

WF CAMPAIGN
Assault on Europe
The campaign is designed for H2H players to use the Western Front mod in campaign play but these battles should offer a good challenge against the AI, too. The campaign represents the action from the landings on Omaha beach to the bitter fighting in the Heurtgen Forest. Contributers: NL_Oxcart has contributed what turned into two operations for the breakout fighting in the bocage after Normandy, and Ron White has supplied the Heurtgen Forest operation. There are also operations intended to represent the fighting across France during the summer of 1944.

Design Notes:
The campaign gives the Americans an early advantage, but many of the subsequent fighting across France is evenly matched. Designed for H2H, the veteran CCer may need to resort to some compromises to get a challenging game against the AI. Suggestions: Against the AI, play with the "hero" setting and always rest three of your teams. Landings on Omaha beach have been split into two operations to simulate more than one wave of landing. Some American units (especially amphibious armor)will fail to deploy on the beach; they will show up in subsequent days rested. Some of the operations have maps that appear impossible to capture, with victory locations far in the rear. These maps simulate the attacker advancing ahead of supply. In these cases, the previous center map holds the important locations for victory, and a win on the main map will be a victory. Sometimes a fairly large point amount is awarded. The next day may be quite different. Careless loss of men and equipment may have serious consquences for the next operation.

The usual CC3 campaign mechanism is at work here; remember, no matter how the fighting goes, the Americans will still advance across France. Your command represents only a small battlegroup, only a little portion of the massive front. Your fight is for the men under your command, to lead them in brave attacks but also to look out for them under tough conditions. The greatest victory is reaching the end of the campaign with many veterans with long histories and many medals.

MOD THE MOD:
Anyone is welcome to edit the WF files for their own enjoyment/mod releases. All appropriate credits to the WF team must be applied.

ACKNOWLEDGEMENTS:
The Western Front mod team has received help/game elements from various sources, including:
1. CC2 Mods used in CC3: The Western Front....
a) Sherman Jumbo for CC2 by "WFA" is used in the game largely untouched and elements of the weapon graphics from WFA's Priest were used in WF's Priest
b) Ninenail's Pershing tank from CC2 is used, but modified
c) The WF Jeep is from the CC2 patch "Allfiles" by "Alan," modified.
2. 3d modeller Gary J. Nemeth (http://www.3d-modelmother.com) provided the main game screen image (Tiger tank).
3. 3d artist Richard Tremblay contributed to the Wirblewind vehicle and provided landing craft for WF's Omaha Beach map by The Q.
4. Graphic designer Andy Reedman did a good portion of the Brummbar vehicle. Thanks to Phil Stanbridge for putting us in touch with him.
5. Mick Conmy's ("mick (xe5)") technical help was crucial for the completion of the Omaha, the centrepiece map for the WF mod.
6. RR Graphics add-on was a source for some vehicles, modified in many cases.
7. Ron Gretz and Oliver tum Suden "GrendeL" were helpful early on with data editing.
8. Nolan Swetlikoff "Tombstone" imported CC2 weapon sound effects to WF.
9. King Tiger graphics were done by "Cathartes".
10. Jean Sabatay did a lot of excellent research into rarity values.
11. Kristofer Bäth greatly refined and corrected German team names and descriptions.

OTHER CREDITS:
Thanks to all toolmakers who make editing the CC series possible.

KNOWN ISSUES:
1. If air strikes hit water, you will see only a splash animation and no impact on any nearby targets.
2. No one is paying us for this mod. 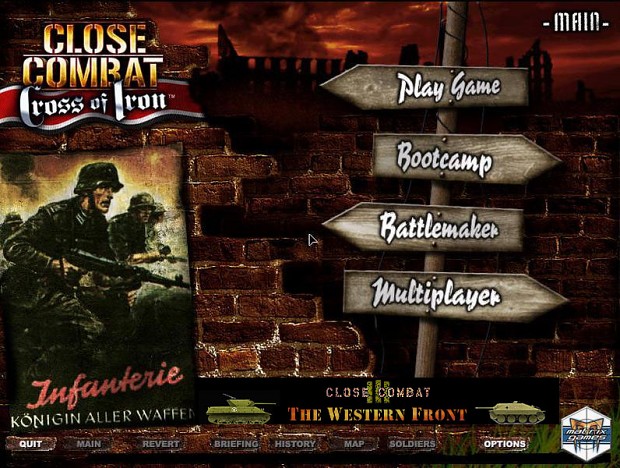