A Trade Federation coreship was intercepted by Republic forces as it entered the orbit of an Outer Rim world. The coreship has crash-landed on the planet's 2nd moon, but is not entirely destroyed. Despite the fact that a Republic Assaultship is holding position over the crash site, a CIS capital ship has moved into the area and is attempting a recovery mission. CIS troops are already landing at the site and preparing a ground defense. It promises to be an intense fight in the thin atmosphere and on the ground!

I take no credit for this map, it was made by Jonathan Witt (a.k.a. "DarthDaddy"). As always I highly recommend using the 2017 graphics mod by Harrison Fog to make it visually stunning and the skin changer mod for variation. Add to your addon folder. 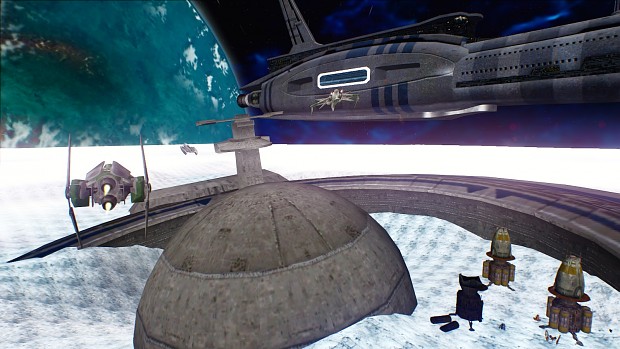 why is it always notepad

why is what always notepad?

Do you mean the readme?

Sorry if I look like an absolute noob, but how do I install the mod? Do I just dump the data folder and the add.me file in the game's Data folder?

Nevermind, I just saw the readme

this is the best game map ever