"The Crossing" is a map produced by Glowing Desert. "The Crossing" is a map about Egyptian forces crossing the Suez Canal in the context of the October 6, 1973 war and how the Egyptians destroyed most of the Israeli equipment stationed along the eastern shore of the Suez Canal during the early hours of the war, and how they liberated the eastern shore of the Suez canal. This movie takes you back to the cold war era and the 1970s. This surprise attack led to a war between the Egyptians and Syrians against the Israeli. The war had a numerous number of names, but it's mostly known as the war of the 6th of October. The war ended with a cease-fire at different times because of the differences between the Egyptian president and the Syrian president opinions on how and when the war will end and even the aims of the war in the first place. The most prominent outcome of the war is the Egyptian re-liberation of Sinai after the evacuation of the Israelis on April 25, 1982 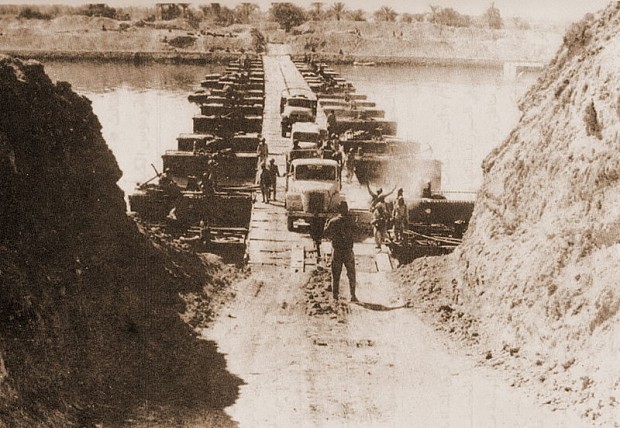 Since I don't have the resources of the used tanks during the war I used the old version of the tanks and for a fact during the crossing battles the Egyptians used heavy artillery, air bombing, massive amounts of infantry units and the Israelis used heavy tanks, AT artillery, and mortars since they were surprised by the attacks they had a shortage of infantry units during the first 3 days of the war which was the main reason why they were low on moral and on the 6th day of the war they started to counter attack because of the American aerial bridge that supported them with high-tech weapons and some chemical bombs on the 10th day of the war the American troops begins to arrive to Sinai after a secret talks between the Egyptian government and the American government were the American promised the Egyptian that they will force the Israeli to return Sinai to Egypt to save the lives of the Israeli citizens in Sinai and The Egyptian citizens who were living around the Suez canal.

Well then, time to move on to a new track (
Steamcommunity.com

thank you for the map, I reworked it a bit and delivered vehicles with that year from Global Escalation mode and others and it is quite realistic :)

Thank you for reworking my map :3 that's makes me proud :)