This Mod contains the same maps (only the German maps by now) but with a different lineup for the AI and the player. Every Mission has different units now with a little more realistic choice of units. Also I deleted the Artillery Zones and changed the arrangment of the defenders. Further I increased the reinforcements time for the AI and gave the player a bigger bonus on captured lines. Also I've changed all unitcosts. I'll add the other nations later via addons if you guys like this variety mod. 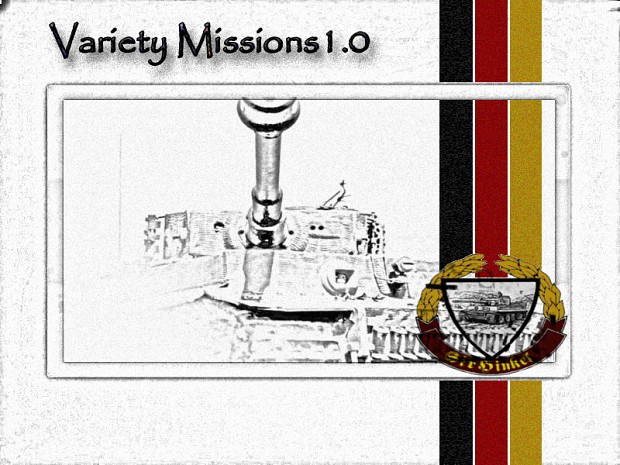 Sirhinkel, great to hear from you, i will test this tommorrow evening! i will let you know!

Add the other nations as well please

hey have you tried just moving your flag points around along with men and equipment and way points? or taking a mission from one map and loading it onto another? I have done it and it works great cuts out all of the script re working and you still just swap out what ever unit you want or how many you just give it the same tag name and that is it...make missions quick and play for hours

I know that this works but you still have to edit the waypoints, rearrange the defenders, the flagpoints, the spawnpoints etc.

I like to start from the scratch and build a whole new and individual script for each map.

yes but when you move the men and equipment around it changes how the mission plays out every time... a lot of times it is not how much you have it is what can you do with what you got already anyway just saying.....nice maps though

hey as I have played around with this method I have found it to be surprisingly difficult to take control of whole map even with it on normal ....I have taken your scripted mission from the map France place and rearrange the troops and equipment on your map called the hill and it took me a two days of playing just to get half way up the hill! hamburger hill anyone? talk about an unexpected surprise:)

have you considered having more than one map in mind while you are setting up a script?....anyhow just trying to come up with ways for quicker and yet just as brutal missions:)

well I know you know this but I am just saying....you can change unit groupings out with any other by just giving the same tag name and such can make groupings as large or as small as you want without even touching the script and further the spawn points/way points can be moved anywhere on the map with a simple mouse click most times it takes me about 45min to hour to set up a large huge map mission and not even touch the script at all other than the way points and flag points:)

yea, all true but I don't want to be faster. I never wanted to become a mission-making-machine. Wouldn't be fun to me to just throw scripts over maps and to fudge around with tags, waypoints etc.

okay I feel ya but if you decide to just think more about tactics when you do it will open up a different perspective on map missions just saying..it is the former marine in me go figure...anyhow thanks for responding:)

thanks alot . I am new to this series and Sir thanks for making it very great to play..Thank you.

Do u have steam?

arrggghhh i can't download for now I NEED IT NOW!!!!

try one of them

Stug III is very inaccurate now. it feels like it have the same accuracy as STUH tbh.

oh I didnt realise there were so many variants.

Stug III G variant. had to play to capture the correct flag to get the tank again :P

Actually the G Modell of the stug III is from the original Game and I haven't changed anything concerning the values.

Strange because it feels like I am shooting a howitzer now.

you might want to test it your self to see what I am talking about.

I will when I am back in Germany

MOAR! It is awesome!

SirHinkel, I totally love all your mods man! Hat's off for this another great work. The last mod you've done i'm still playin it. Thanks for creating great mods!

You're very welcome and thanks for these motivating words!

ohh the stug IV is very inaccurate especially the HE ammo but i guess its the realism. it doesn't bother me although i beat the bloody british tanks

"....now with a little more realistic choice of units"
So does this also mean the enemy have realistic units for the era,
like no 1945 tanks in a 1943 desert battle ?
I would play this then :o)

There are still some "wrong" tanks especially when it comes to the allied tanks because sometimes there are no real counter-parts to german tanks so I had to pick one from a later part of the war.

im giving this a 8.5 alot of missing units in every maps and some available. i love the Panzergrenadiers and King Tiger these units are like my knights in the battlefield

i hope you improve the game more SirHinkel

I think you missed something. This version of the Mod is for those people who DONT'T want all units in the game. So of course there is no King Tiger in a map which is set in 1941... And also Panzergrenadiere haven't been on all battlefields.

Love the "low caliber" fights. I dont think you'll have a problem finding a crowd ready to eat up the other nations as well. Keep it up. I love it.

GSM will get its own unique campaign and I'm making good progress so I guess I'll be able to release it short after the next GSM update.

I think the next GSM update will be on MoW Assault Squad 2, and it's not soon

SirHinkel i got one question why all enemy units was invisible when i use ur map pack in Lan or internet??

Sorry when i use all mod's or maps enemy units was invisible.

Because I want them to be invisible on every difficulty higher than "easy". ;)

The units are unique and the tanks are great, especially german tanks.

Amazing level of work SirHinkel!!! Honestly, the value you have added to this game is many times that of the original product itself. You took a mediocre product and made it great. If I could generate the enthusiasm, I think you should be compensated and on the payroll making missions for us MoW junkies.
Give us a (paypal)donation link and I'll gladly start the ball rolling

I have made some missions like this but the balancing is very hard. I guess it's just possible for very experienced players.

These new missions are an excellent improvement over the classic ones, I enjoyed them even more than your previous skirmish missions; using different unit presets for each skirmish really encourages diversity and tactical thinking, instead of the usual cap asap, unlock Jagdtiger + Königstiger, steam roll (if you're German :D)

Truly a testament to your continued excellence in these addons, please do continue with the other nations.

Your mods are passion for us, we play your mods every day. You are MASTER sir Hinkel.

I'm happy that there are still some people playing it because I still have fun with the editor ;)

this is insanely addictive, I can't get enough of the German missions; some Russian and GB defense missions would be epic!

keep up the great work!

Nice idea, some operations like defence villages of Sokolovo or Tobruk, for GB units will be great, sir :) :) :)

SirHinkel,
r u sure dat these maps have different missions with different objectives?