Men of War 9 missions(Russian "road to victory" campaign) converted to Men of War:Assault Squad by DJSatane. VERSION 1.04. Overauled, Modified & Improved take advantage of MoW:AS. Read included readme for details. Included with release is "game_progress.set" that will let you see all 9 missions in single player skirmish menu under bonus without having to complete each one first, consult included Game_Progress_Readme for that. -credits->maps/missions/models by Best Way, 1C, DMS. conversion by DJSatane. Some skins by guidoz83, fastlegs & asureka. Special thanks to Heroic Club for playtesting.

------------------------------
VERSION 1.04 (Sep 10, 2012)
------------------------------Conversion changes:
1.04
-modifier files path fixed
-minor night sneak ger reinf side changes.
-penal unit making only holding hill and not losing all man as primary obj late in game.
-minor fixes on factory.
-Sevastopol minor changes to tank reinforcement when Karl Thor shows up, minor reinf rate changes and small coastal battery tweak.
1.03
-night sneak changes whats deleted on progress(clips).
-at guns on dubovka operational by player for fun.
-plane state fixed on moscow.
-player reinforcement overhaul and rework on night sneak, all the reinforcements how they arrive have been streamlined and less complicated in the script based on how far player advanced.
-reinforcements changes on night sneak, 1 bm8 available as hero, infantry reinforcements simplified.
-clips changes on night sneak and other minor tweaks.
-submarine added movie for game complete from mow to play even in coop, minor autoassign fixes to paratroopers reinforcement.
1.01
- Soldier models/skins are higher quality, ported from CH.
- All missions have added support for heroic difficulty.
- Player soldiers for the most part all carry morphine & sandbag kits(please refer to loading screen for each mission setup on this).
- Player Health base value based on difficulty.
- AT guns and Tanks inventories altered for support of APCR since MoW:AS supports it.
- Blood mod included.
- Full coop support of course, few missions script tweaked for better timing of coop autoassignment.
- Minor script changes/fixes.
- New script method added that allows revival of fallen soldiers anytime without 30 second limit(depends on mission, refer to loading screen).
- Minor additions/tweaks to the missions.
- Some units such as Karl Thor fully converted to MoW:AS.
- Penal Unit mission fully reworked on the hill defense part, german attacks added and reworked due to mowas longer weapon ranges.
- Missions allow full ability to repair tanks etc... something that was blocked in many of the MoW missions originally.
- Overhaul of night sneak(behind enemy lines) mission, reinforcement changes, removed unneccesary elements of the mission such as arty smoke grenades etc...
- night sneak mission fixes to ai tanks location due to mowas ranges being much higher.------------------------------
INSTALLATION:- Extract the mod folder from the archive.
In this folder, you will find the mod folder that you have to move in the "mods" folder inside your Men of War: Assault Squad directory (if this folder does not exist, create it)Normal Path to Men of War Assault Squad: - DvD version: C:\Program Files\1C Company\Men of War Assault Squad\mods
- Steam Version: C:\Program Files\Steam\SteamApps\common\men of war assault squad\modsAfter install this mod, when you open the skirmish menu, you will find missions under Road To Victory button. Click on it to access the missions.
In multiplayer these missions will list under Skirmish/Cooperative section.*If you want to have all missions listed in single player without having to complete each one in order please consult Game Progress Readme.txt
included in same location as this readme.CREDITS:
- Best Way, 1C, DMS - Men of War bonus missions/maps.
- DJSatane - conversion of script/maps to work properly on MoW:AS.
- Special thanks to Mopar.
- Tiger skins by guidoz83 & fastlegs used in 3 missions.
- pz2f skin by asureka used in 1 mission.
- soldier model/skins based on 1c multimedia skins.FOR HELP, SUPPORT, TIPS, bug reports etc:Contact user "djsatane" on Digitalmindsoft forums:http://digitalmindsoft.eu/forums/member.php?14588-djsatanehttps://twitter.com/#!/DJSatane 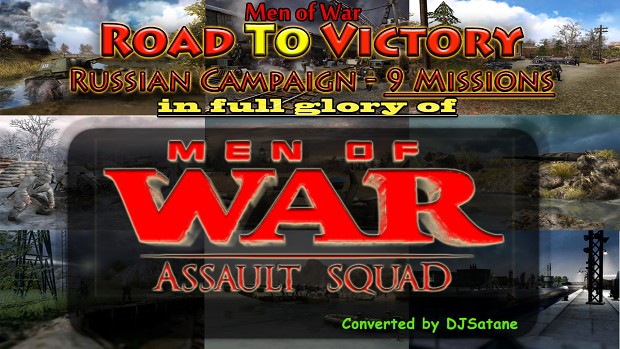 Thanks for the great missions!

Just reminder, please use at least patch 2.5.13 with this conversion, it may work with older versions of assault squad but some things may be missing or not work as intended.

Great as usual DJ ! Did you project to convert the others campaign ?

Not at the moment, however if you ever enjoy playing some of the german missions from mow, like lagollette or tobruk I did convert it with full mowas support and improvements to play with friends, I just never released it. If you interested you can get it here:

Hi, i'm trying out the mod, it seems stuck at the first mission, i'm supposed to receive a few men, but that doesn't happen and then nothing happens at all..
I'm playing with steam..

You have to get near the soldiers in the trench and you get icon to recruit soldiers over their heads when you move mouse over them, once you recruit few mission will progress... This is old men of war thing thats still in this game but in many misisons you can recruit ai soldiers on your team if you just get close to them and move mouse over them.

My game is crashing when I activate the mod.

What version of the mowas do you run? Do you have it patched to the latest version? Also do you have any other mods active?

omg this is awesome, finally somebody did what i want, thank you a lot!!finally i will can play this awesome missions on assault squad not that repetitive boring skirmish assault missions -.-

Enjoy, just remember my conversion actually has a lot of old script bug fixes and improvements along with improvements to certain models/maps and benefits of mowas 1 features.

I also converted certain german missions ( Moddb.com ) but you cant mix the mods together only 1 can be loaded at same time.

This campaign would be great in MoW AS 2 :)

JUst wonnder if someone can make an old Soldiers Heroes of WW2 Campaign, its gonna be awesome XD