MoW:AS game version 2.05.13 or higher REQUIRED. 1944, Biak Island(VERSION 1.04) New Guinea, Operation Kon. You are in charge of Japaniese forces with orders to drive UK & Americans from the island. Wipe out UK forces defending the island and survive various American counter attacks in the jungle. Various sub objectives including taking on Churchil AVRE and its radio spotter late in the mission. Prepare yourself for variety of UK armor and repell American forces. Various improvements in script with regard how some of the enemy armor is spawned without need to be all preloaded at start of the mission. Highly improved recrew script for ai especially for mg/at guns to make sure there are no stupid things like sniper recrewing mg or soldiers running across map to recrew at gun. Improved ai logic in cases such as sniper, sniper will act a lot more like a sniper now should on ai side. Enjoy and good luck.

Should be compatible with GSM(not tested though)
INSTALLATION:- Extract the mod folder from the archive.
In this folder, you will find the mod folder that you have to move in the "mods" folder inside your Men of War: Assault Squad directory (if this folder does not exist, create it)Normal Path to Men of War Assault Squad:
- DvD version: C:\Program Files\1C Company\Men of War Assault Squad\mods
- Steam Version: C:\Program Files\Steam\SteamApps\common\men of war assault squad\mods
After install this mod, when you open the skirmish menu, you will see a slot "New Missions/Mods" right above all other faction buttons. Click on it to access the mission.
FOR HELP, SUPPORT, TIPS, bug reports etc:Contact user "djsatane" on Digitalmindsoft forums:
Digitalmindsoft.eu 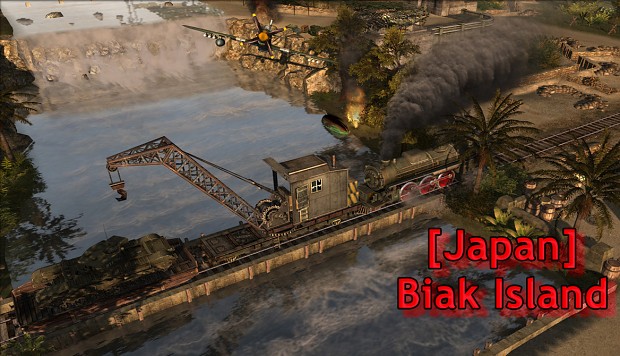 Any chance of making a version where you play as the allies?

Currently working on a new map involving Germany helping out finnish forces to beat Russians in the Vyborg–Petrozavodsk offensive. After that we plan an allied map.

should be compatible with GSM if loaded *after* Biak is loaded/active first, GSM last...

At last I can play withc JAPAN!