The Battle of Bautzen (or Battle of Budziszyn, April 1945) was one of the last battles of the Eastern Front during World War II. It was fought on the extreme southern flank of the Spremberg-Torgau Offensive, seeing days of pitched street fighting between forces of the Polish Second Army and elements of the Soviet's 52nd Army and 5th Guards Army[a] on one side and elements of German Army Group Center in the form of the remnants of the 4th Panzer and 17th Armies on the other. Your be playing as russian army as you try to capture the outskirts of the German city of Bautzen! Few new skins and 1cs character models from there new mowch.. huge credit to them ..

To install just Unrar and throw it into your Program files/steam/steamapps/common/mowas/mods ...then run the game go to options ...Activate the mod away you go :D

And remember to drop a comment down below and let me know if you find any bugs! 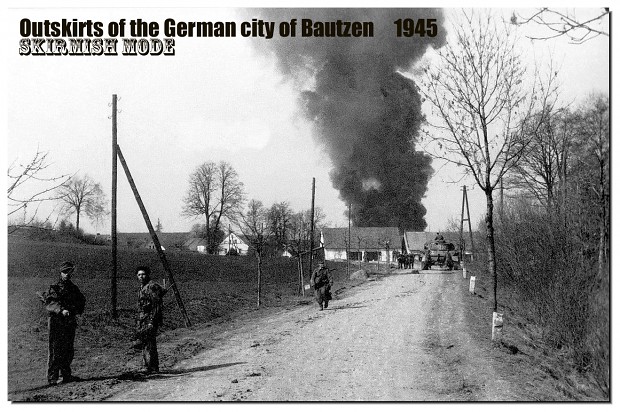 Well done Fastleg!
Very interesting skirmish mission with good choice for the emplacements of the flags: a fun mission to play!

Thanks guys and big thanks to you DjSatane for helping me fix few issues .. or else this might not of been released!

another nice map from fastlegz :) enjoyed playing this in skirmish although ive generally grown tired of the skirmish mode, excellent map!

Thanks ozka i really appreciate it and yeah the skirmishes can get to you, that's why i decided to go back to my old style of making missions!

Making another tank mission.. GeRmaNs vS RussIanS coming out soon!

fastLegs is one of my favorite makers :-)

crist this is hard were are theses solders coming from lol