1c for models from mowch and big thanks to toiletguy!

The Crimea Campaign was an eight month long campaign of the Axis forces to conquer the Crimea peninsula, and was the scene of some of the bloodiest battles on the Eastern Front during World War II... The mission your about to play is made up and is just made for fun!.. player will be axis side, as he defends HQ while waiting for reinforcements!

To install just Unrar and throw it into your Program files/steam/steamapps/common/mowas/mods ...then run the game go to options ...Activate the mod away you go :D

And remember to drop a comment down below and let me know if you find any bugs! 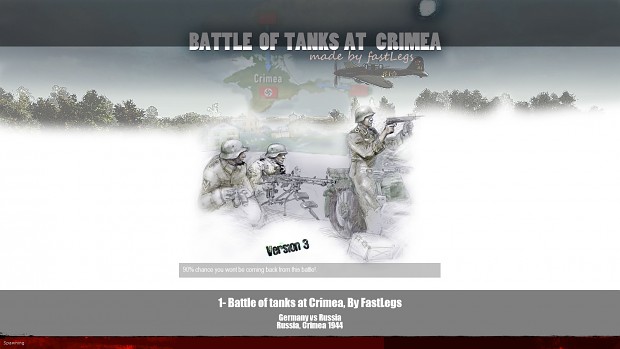 This is an unfinished project and is totally up to you guys how this pans out .. Do i add more map so germans can counter attack, or do the russians send a 3rd wave and german 6th comes to the rescue?

It's up to you guys to decide whether I should continue on this?

Will be playing it on monday with 5+ players, will report after!

Thanks heaps for another of your great singleplayer stuff. Really awesome.
cheers OldSpot

a german counter atack if possible both options :P

Hi, I have unloaded the map, this one in the folder MODS since I do with others, but it does not work. Initially it changes the music, but the map does not appear in choosing mission. He would be grateful for help.

how about updating your game? ;P