This vehicle model has been archived by the uploader because it is out of date and no longer supported. We recommend you browse the file list for the latest vehicle model.

This pack includes multiple variants of the E 75 heavy tank and a few extra features.

This pack includes the following stuff (and a little more)

Humanskins (each with multiple textures depicting different decorations and rank.) 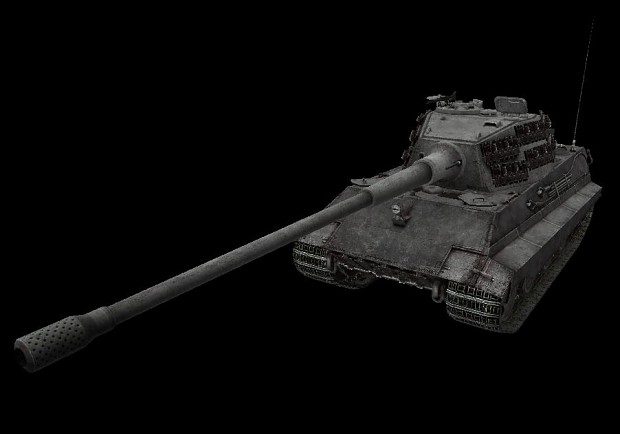 Feel free to post any feedback here! It's great to hear from fans of the mod so that I know the community's thoughts!

I'm sticking by my favorite tank of all time :)

can u make maus? the german big tank?

It's in the works

Says Invalid title when i try to put this or the E-100 in the Mods folder?

This file is outdated, but will be replaced at a later time and will be functional

Well World of Tanks isn't exactly historical, and based on my ridiculously extensive research there was never a proposal to mount the 128mm L/55 on the E 75. If I can find a 3D model to code for one, I'll gladly add it! If you'd like to "officially" request the vehicle, I'll certainly be glad to oblige, but right now, fictitious vehicles aren't very high on the priority list for Entwicklung as I'd like to perfect what is already in the mod :). In regard to the vehicle design itself, here's a quick passage I wrote in case you or anyone else is interested in the history ;)

Rather than the 128, they intended to mount the 88 of the king tiger or an L/100 gun of the same caliber within the same turret as the E 50, but also suggested was the use of a modified King Tiger turret to mount a 105mm gun. Considering that the 88mm L/71 could be mounted on the E 50, and considering the changing requirements that the E 75 would be adapted for, the L/71 makes no sense for the heavier E 75 (also consider that "heavy" tanks were so named for their guns, not their armor). The 88mm L/100 would have been useful on the eastern front, but was far too long for reasonable use in anything other than a very narrowly defined set of circumstances. The 105 was most suitable for the vehicle, as it was more effective than the 88s and would have been more versatile. With respect to a larger gun, there wasn't much space in the E 75's turret (neither the Schmallturm design nor the modified Tiger turret design) for the 128mm L/55 and its ammunition. Were they to use this weapon for the E 75, there would have been minimal room for ammunition, and so the effectiveness and self sufficiency of the vehicle would have been greatly diminished. In addition, the E 75 was more suited, like the Tiger before it, for long range fighting, and a 105 L/68 or longer gun would have provided greater accuracy and penetration than the L/55 in a lighter package, along with more room for shells. The E 100 was more suitable for such a weapon, as it was designed for closer-range combat than its lighter, faster counterpart. The E 100 would also have had much more room for ammunition in its turret, and, indeed, it is likely that the 150mm L/38 often associated with the E 100 would have been phased out of service and replaced by a 128 rather quickly... which is part of the reason I have been looking so hard for E 100 models that don't crash my computer XD. Anyway, the E 75 would have been more adaptable and more capable with a 105. The 128 just doesn't make a lot of sense simply due to the limited ammo capacity and the fact that the E 100 could mount the same weapon without such big problems. However, if the E 100 were to be phased out of service, which is possible due to the needless difficulties that the design posed (transportation for one, despite being an improvement on Porsche's mess called the Maus), then yes, it is possible that late variants of the E 75 would have carried the 128.... so yeah to sum all that up, there wasn't a design for an E 75 with a 128, but it is possible that one might have come forth at some point, so I'll be glad to add it if I can find or make a model :)