The first 30 seconds of gameplay where you, the player, learn the rudiments of control, on many occasions, without being aware of it, explained in 5 minutes and 700 words.

< Previous article: The Lair dissected: An overview about planning ‘Level 0’ (Part I)

Use this Level 0 video as guide to understand and contextualize all indications described below.

The final seconds of the intro, where you see flashes and battle echoes resound inside the mountain, serve to place the current context and, therefore, introduce the character. The beginning of the level is the first time you see the protagonist so the camera is very close, highlighting it. In addition, character is located on a small floor elevation to give it greater relevance. This is you, player. 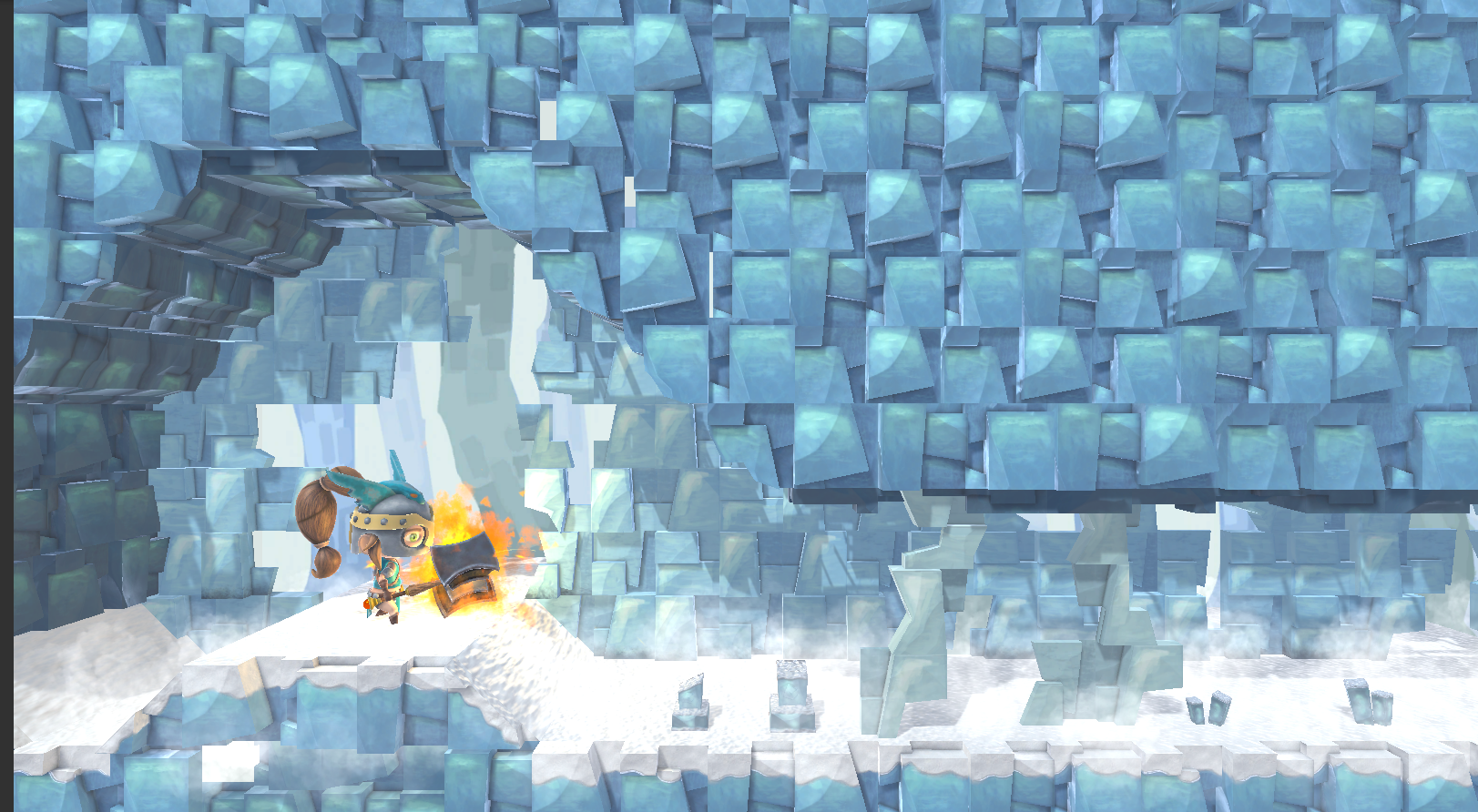 We have placed it in a closed safe space without distractions of any kind with a single exit, because the intention of the gameplay is to introduce you to the most basic tutorial in the most fluid way: move on!

The exit of the room has a long corridor, also safe and with no distractions, that fulfills several functions. At the narrative level we generate expectation: what is there in the end? In this section we begin to move the camera away because we have already presented your avatar. Now we are going to focus your attention on what interests us most: the control of basic mechanics.

During the transition of this corridor we expect many players try the buttons discovering their usefulness; mainly jumping and hitting, although by the morphology of the section the ideal would be to run. However it is not a space designed to teach anything, but to provide freedom to the player's contact with this new world (and its control).

The corridor leads to the playable area itself which we have split from Design into smaller areas that meet certain goals. This first part of level 0 is a kind of chimney where the player must go climbing until reaching the top of the mountain, which we will see in future articles.
In this vertical area we reuse previous concept with slight variations: closed and safe environment (there are enemies, but you cannot die or fall by cliffs) with a single exit (up, up, up). In addition, the more you move forward, the wider the space will be. We are taking you by the hand and little by little let you go like children learning to ride a bicycle. The first obstacles are elevations of the terrain that can only be avoided by jumping. There is no other option: it is a platformer and the jump is something basic. With this obligation we avoid explaining such a genre basic concept. But it is not the only thing you will learn. When jumping, the ice blocks hanging from the roof located in a strategic way will be destroyed without wanting in one of those jumps: you learned that the ice breaks. Finally, the exit of this small area also teaches you something: fine platforms can be traversed. 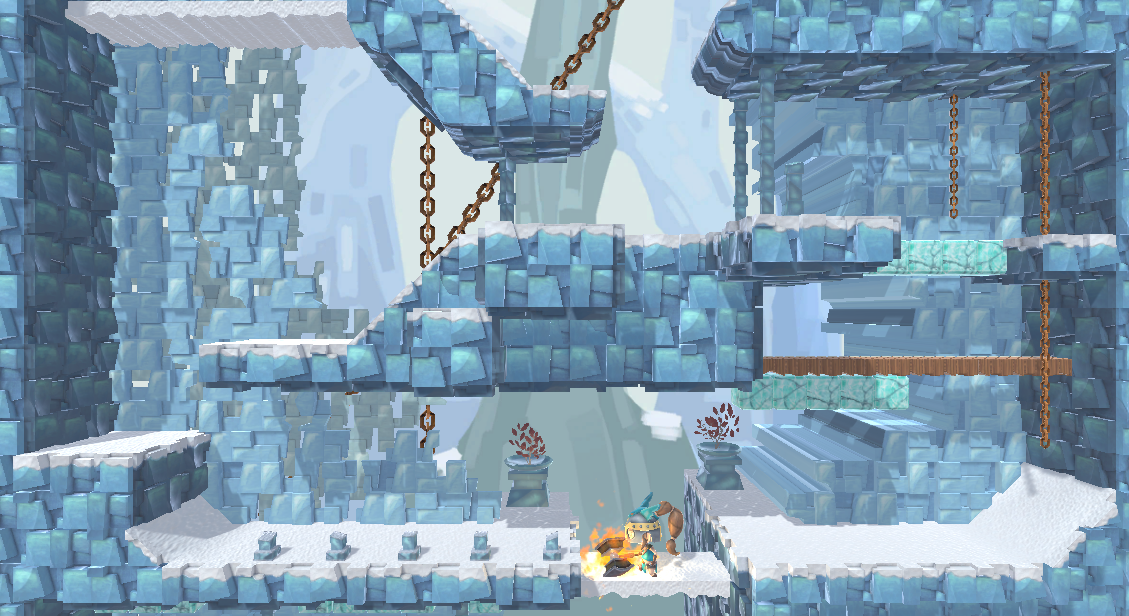 New area offers two paths which helps us to introduce another fundamental idea that we are going to develop in Fulvinter: in your adventure there will be forks to move forward by paths of different difficulty and length.

The right side continues the natural path of the previous area and insists on setting the ice-breaking and traversing platform concepts; it is the laborious path, but the shortest to reach the next area. The left path is simple, you can overcome with two jumps but it is longer. The two paths share a proposal: you probably discover the bounce on the wall or, at least, that when jumping on a wall something different happens. In fact the key part of the next area can be cut by climbing the left wall; although this movement would only be available for someone who already dominates control.

The area reached has the sole goal of rescuing the partner/second player. But again, we suggest, we do not impose, this liberation by avoiding placing cage in the middle of the main path. We also use this mechanical need at a narrative level using a dramatic resource: a call for help from a cage. A hero always diverts from path to help those in need! 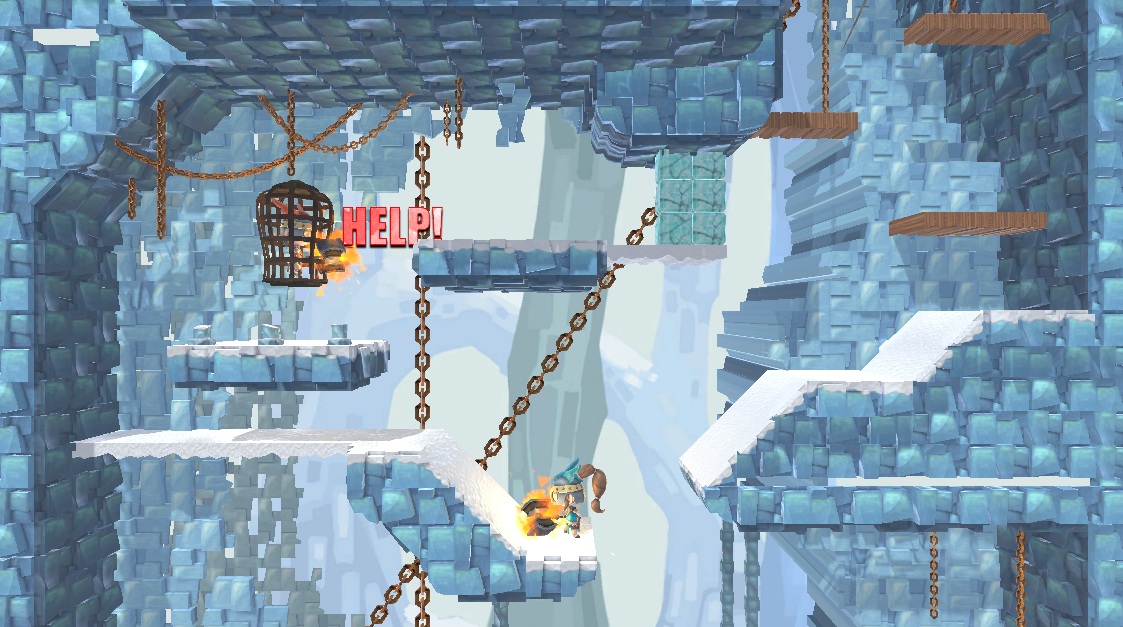 To leave the area, once your partner is rescued, it can be done from the lower path although that would be to go back and walk a longer way. The best option is to take the upper path and to discover that the ice breaks also by hitting with the hammer.