I’m doing this guide because I don’t think I’ll try Epic anytime soon and might focus on Fallen Lion campaign, so people who didn’t try Disputes yet wont have to wait until someone gives them clues or guides. (Or they lose food/horns testing it by themselves like I did)

I didn’t finish 5* full campaigns yet by playing Siegelord, left Epic to do 5*. But since I only tried it as test (what to do and where to go). I completed it with only 3* with 10 phantom drops , so i should be able to do 4* , but 5* i don’t think so. My treasure is 61/61/61 left side and 37/37/23 right side (was lower at Easy/Normal/Hard) , with 2 gems on left side : attack lvl1 gem and lvl2 gem on defense. So its 62/63/61 - 37/37/23 (with gems included in lvls).
So if your treasure is lower then mine, you might not be able to do Hard/Hell 5*. (I haven’t tried epic level yet)
I’m doing this guide because I don’t think I’ll try Epic anytime soon and might focus on Fallen Lion campaign, so people who didn’t try Disputes yet won't have to wait until someone gives them clues or guides. (Or they lose food/horns testing it by themselves like I did)
Disputes Easy / Normal : 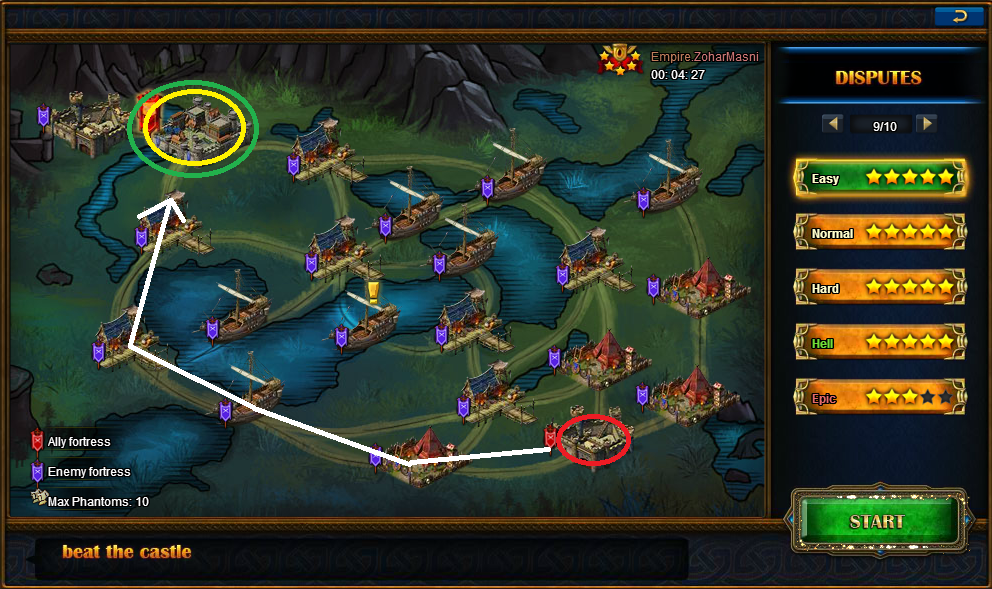 *red circle = start
*yellow circle = quest that needs to be done
*green circle = exit ; finish
*white arrows = path pointers
Steps :
-Head to the "yellow circle". On your way rush every time its possible ( 2x rush will earn you 1min bonus time).
-After you’ve besieged the "yellow circle" quest will be "Enter Battle" type , that means you will need to enter and fight to do quest, and after you’re the campaigns ends.
It’s that simple.
Disputes Hard : 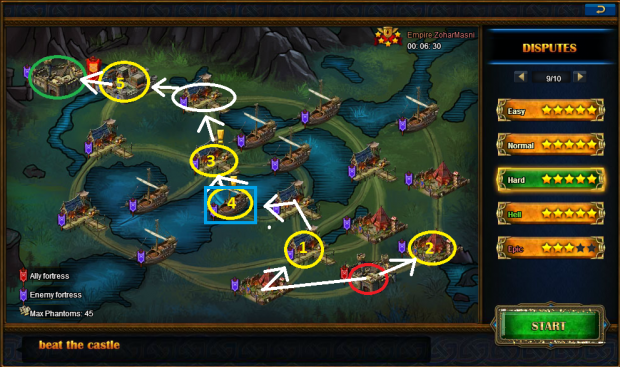 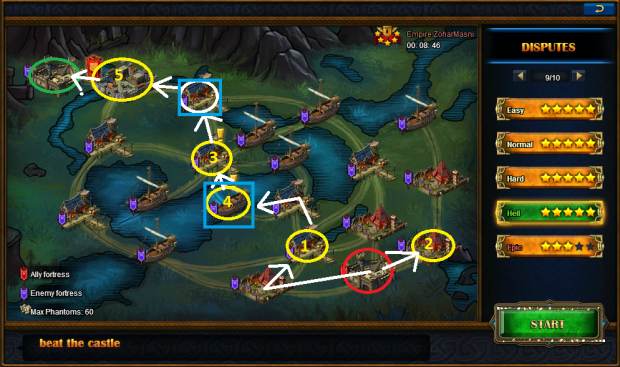 Steps/Guides:
It’s the same as Hard , only thing is I skipped the 4th"yellow circle" quest , by doing 3rd "Yellow circle" before clicking on 4th. But if you’re going to do the 4th quest then drop some phantoms as shown on picture. (But I skipped it) Use 30 phantoms in order to get a 1minute bonus, also rush x10 to get 1minute bonus time. Drop phantoms at the "white circle" in order to rush faster , also drop 1x phantom at last 2 territories in order to be able to duel with 3 generals. Read hard guide for better understanding.
Disputes Epic : 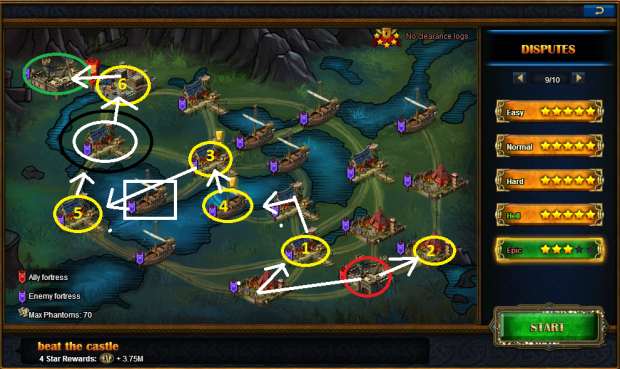 This one I did only to test it , I didn’t really try to completely beat it. But if I was going to try to do it in a serious way it will be 4* instead 3*.For 5* it needs higher treasure / general levels.
Also in the test I didn’t use a lot of phantoms.
Steps/Guide:
- "White circle" / "black circle" will contain 50x NPC's they will decrease to 45-46 when 3rd "yellow quest" is done (same path as on hard).
- Also when the 3rd "yellow quest" is done it will clean the "White square" territory in which was like 18 NPC's and you will have clear path to 5th "Yellow quest".
- At the 5th "Yellow quest " there will be 18 NPC's so you need to duel them out. I’m not sure if dropping phantoms here would help much , but 3-5 phantoms would not be bad idea. Since you need to duel em out fast , in order to do the quest there. The quest, 5th yellow quest is the reinforcement quest it will send troops into "white circle" / "black circle" 75-80 NPCs will be sent there. So it will be 75-80 vs 40-45 , you might drop some phantoms to be able to rush to 6th "yellow quest".
Other then that it’s the same as Hard/Hell guide mostly , so read those guides too. Also, 30x phantoms should give you a 1min bonus time and 10xrush. Use phantoms to rush faster , or to duel with more generals (for example last 2 territories dropping some 1-2-3 phantoms to be able to duel with 3 other generals.)
-Its up to you , in order to skip or do 4th yellow quest. I didn’t try this campaign for real so I can’t tell which way would be faster/easier. I'll update Disputes Epic guide when I do it 5*.
Learn more about Siegelord here: Siegelord.37.com
Post a comment
Sign in or join with: