Important changes to the Tau faction and new stuff. 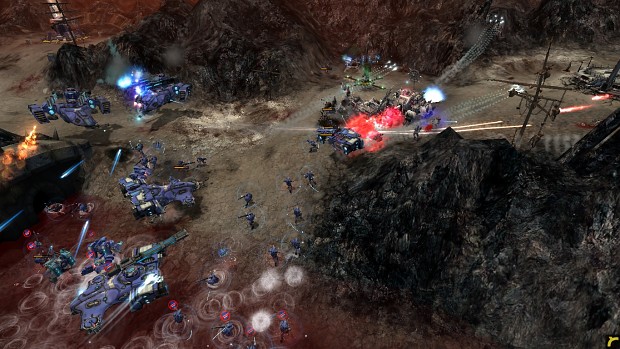 With long range and good ranged damage, but low health and even lower melee damage, the Tau can be considered to be glass cannons. They combine good mobility and offensive power but suffer from weak melee that mean they need to be protected by auxiliary forces. Their vehicles also have good mobility with the ability to jump and most have long range but are fragile. Their defenses also tend to be on the fragile side.

Tau units scale better than before with more upgrades to improve their damage and more weapons choices. Their squad sizes have been increased but their overall damage starts lower.

Crisis Suits are now in squads of 3 and their health, cost and damage has been reduced. They can also reinforce Shield Drones.

Skyrays Missiles now do less damage to infantry and has a smaller area of effect.The Barracudas weapons do less damage overall and the damage is spread more evenly instead of being concentrated into the Missiles.

The Tau Commander has been renamed to the XV-22 Commander and can reinforce Shield Drones and Gun Drones.
The Ethereal can no longer spawn Fire Warrior Shas'ui Bodyguards and can instead reinforce them as part of his squad.

The Greater Knarloc is now capped at 3 and its health, damage and cost have been reduced.

Shield Drones Energy Shield is now a passive effect and its damage reduction has been reduced.
XV-88 Broadside Battlesuits can no longer Entrench/De-entrench but can fire its weapons normally.
The Skyray Missile Barrage damage has been reduced.
The Ethereal can now use the Orbital Defense Cannon now does massive damage over a wide area during a long time at the cost of 300 power. The Ethereal can no longer clone any Tau unit and instead can create a clone of himself that can be reinforced with dummy bodyguards and can use dummy abilities.

The Tau Commander no longer upgrades his weapons himself and instead upgrades through researches.

The Advanced Pulse Rifles research damage bonus to Fire Warriors and Pathfinders has been decreased.

The Pathfinder Shas'ui can now be added as a leader to Pathfinders. They increase the sight and detection radius of the squad and can use the Mark Squad ability instead of Pathfinders themselves.
Sniper Drones are now available with long range damage good against Infantry and especially against Heavy Infantry.
XV-88 Broadsides can now reinforce Repair Drones to increase the health regeneration rate of the squad. They can also reinforce the XV88 Broadside Shas'vre with more health, shoulder-mounted Missile Pods and arm-mounted Railguns.
Gue'vesa Auxiliaries are a cheap, disposable troop choice that has the ability to upgrade some of their squad members with Pulse Rifles and Pulse Carbines. They can also use Pulse Grenades, similar to EMP Grenades for Stealth Suits. They scale, but not as much as other troops.
Fire Warrior Breachers are a close range alternative to Fire Warriors. Their Pulse Blasters are short to medium range and knock down enemy infantry similar to Space Marine Scout Shotguns. They also deal slightly more damage in melee, so it's best to be more aggressive with them.

The XV-22 Commander can now reinforce Decoy Drones with high health to absorb some damage meant for the XV-22 Commander.
The XV-89 Commander is a new battlesuit commander with the ability to upgrade to Missile Pod (good against vehicles or buildings at long range), Fusion Blaster (short range and effective against vehicles or buildings), Airbursting Frag Projector (effective against groups of infantry and disruption), Cyclic Ion Blaster (effective against infantry and heavy infantry) and Plasma Rifle (good versus all targets) by researches. Can also reinforce Repair Drones, Gun Drones, Shield Drones or XV89 Bodyguards with Missile Pod and Plasma Rifle upgrades.

The Swordfish and Stingerfish Gunships are new alternative relic units with a shared cap of 2. The Swordfish Gunship has Twin-Linked Railguns, Smart Missile Launchers and a Burst Cannon. The Stingerfish Gunship has 3 Railguns and a Burst Cannon.
There is now a choice of three Heavy Battlesuits. The XV-104 Riptide is a formidable long range Heavy Battlesuit that uses its superior range and weaponry to rain down fire with its Missile Launchers and Heavy Burst Cannons with Plasma Rifles, that can be upgraded to an Ion Accelerator for anti-vehicle damage. The XV-107 R'varna is a long range ordnance equipped with dual Pulse Submunitions Cannons to deal devastating damage to all targets over a wide area, trading its ability to jump with heavy damage and range. The XV-109 Y'vahra is a close range support unit that uses it's mobility, Phased Plasma Flamer to incinerate infantry and Ionic Discharge Cannon to stun and destroy vehicles.
Another new alternative relic unit is the XV-202 Mako Superheavy Battlesuit. It is capped at 1 and is slow, heavily armed and very tough. It is armed with two Twin-Linked Railguns on either arm and two Missile Pods mounted on its shoulders. It also reduces the ranged damage received.The player has to choose between Greater Knarlocs, Swordfish/Stingerfish Gunships, Heavy Battlesuites or the XV-202 Mako.

The Cadre Headquarters is able to build Drone Turrets and deep-strike them onto the field. They have Burst Cannons and can upgrade to Smart Missile Launchers.

Skyray Missile Gunships and Hammerhead Gunships now have the ability to jump.
The Ethereal can now use the Manta Strike ability to deal massive damage to a wide area over a long time at the cost of 300 power. It cannot be used at the same time as the Orbital Defense Cannon ability.
The Ethereal Clone can use dummy Manta Strike or Orbital Defense Cannon abilities that have the same visual effects but do no damage.