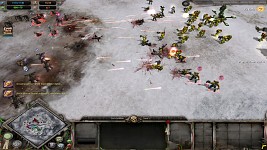 Small, elite squads, the Space Marines have higher damage and more health but at are costly and time consuming to recruit and reinforce. Combining long range support weaponry with good melee damage they are adaptable and survivable. Their vehicles, like their troops combine high range and melee offensive capabilities with well armoured forces.

Terminators and Assault Terminators like normal trooops are more tough than before and their cost, build time, health and damage (both melee and ranged) have been increased.

Similarly most Space Marine weapon upgrades are now roughly twice as expensive and take twice as long to obtain than before but are twice as powerful. Their Heavy Bolters do more damage to normal Infantry armour but less to Heavy Infantry, Plasma Guns damage has been increased to be much more effective against Heavy Infantry armour and their Missile Launchers costs have been reduced.

Scouts are now able to reinforce Scout Sergeants with the ability to use Krak Grenades.
New Devastators can be requisitioned with anti-infantry long range Heavy Bolters as standard, they can upgrade to Missile Launchers or Lascannons to deal with vehicles from afar or Plasma Cannons to deal with groups of infantry from a safe distance with their area of effect and disruption effect. The Devastators' ultimate weapon upgrade is the Graviton Gun which deals significant damage at long range against most armour types but can only upgrade one per squad. Although they are powerful at range Devastators however cannot capture or decapture enemy strategic points.
Vanguard Assault Marines are stronger than Assault Marines and can upgrade all of their melee weapons through researches.
Sternguard Veterans can be equipped with Plasma Guns, Melta Guns or Multi-Meltas to be effective against Infantry or Vehicle and Building armour at medium range. Can also use Vortex Grenades to soften a group of enemy troops and Infiltrate to move around the map unseen.
Also able to use Infiltration and Vortex Grenades, Vanguard Veterans can be equipped with Power Axe or Power Swords or Power Fists to be effective in melee against a variety of targets.
Apothecaries can be upgraded to Terminator variants with the Heavy Armour Deployment research.

Razorbacks are a new light transport vehicle with the ability to upgrade to Lascannons for added long range anti-vehicle support.
The Razorback Rikarius is a Razorback variant with two sets of sponson-mounted Hurricane Bolters for dealing with infantry swarms, and a range of weapon upgrades for dealing against various targets but no transport capability. Starting with Twin-Linked Heavy Flamers, it can upgrade to Twin-Linked Heavy Bolters or Twin-Linked Assault Cannons for effectiveness against infantry or heavy infantry, Twin-Linked Plasma Cannons for damage against infantry over a wide area and knockback, Twin-Linked Multi-Meltas for damage against vehicles at medium range or Twin-Linked Lascannons for long ranged anti-vehicle damage.
The Venerable Dreadnought is a new heavy walker starting with a twin-linked Heavy Flamer and melee Power Claw and can upgrade either arm to a variety of weapons including the Multi-Melta, Twin-linked Lascannons, Twin-linked Autocannons and the Plasma Cannon which is not available for the standard Dreadnought.

The Techmarine has been added with a higher repair rate than Servitors and some abilities to provide cover for troops and grenades to deal with Infantry or Vehicles.
The Force Commander, Librarian and Chaplain can now be upgraded to Terminator variants.

An alternative Land Raider configuration, the Land Raider Redeemer is now available to build, with Flamestorm Cannons very effective against troop morale and light buildings it is also equipped with Twin-Linked Assault Cannons for anti-infantry damage.
Making Land Raiders or Land Raider Redeemers unavailable but with the ability to reinforce bodyguards for added protection and damage, the ability to jump in and out of combat and high all round damage and tough armour, the Chapter Master is a force to be reckoned with. The Chapter Master can also use some abilities such as Feel no Pain to prevent his squad from dying until the ability runs out and Iron Halo to protect himself from ranged damage.

Land Speeders can now upgrade to Multi-Meltas (for close range damage to vehicles) and Assault Cannon (for additional anti-infantry damage)
Rhinos now start with Twin Linked Storm Bolters and can upgrade it to Heavy Flamer for effective morale damage against groups of enemy units.

Servitors now have to ability to passively make nearby vehicles slowly self repair.
Apothecaries can now rapidly heal a squad by using the Health Kit ability.
The Force Commander can now use Holy Auspex on the ground as a hidden detector of Infiltrated units.
The Librarian now has a wide choice of abilities to perform a variety of roles, either to be more offensive in dealing damage, or defensive to protect troops and the Librarian himself or an all-round mix. In addition to Smite, Weaken Resolve and Word of the Emperor there are also 6 other abilities for a total of 9.
Veil of Time will allow the Librarian to move faster for a short duration and later will allow the attached squad to move faster too.
Null Zone will reduce the armour of the target area or units for a short duration.
Might of the Ancients increases the melee damage dealt and reduces melee damage taken by the Librarian
Force Shield greatly reduces the ranged damage taken by the Librarian
Compel causes the target squad to lose control and attack allies while active
Vortex of Doom deals massive damage continuously for a short duration, over a wide area.