This guide will guide you through how to install and setup the SiN Episodes SDK.

The following guide will teach you how to install and setup the SiN Episodes SDK, part of the Source Engine which the game is build upon, to begin creating maps and mods for SiN Episodes: Emergence.

Another version of this guide can also be found on the Valve Developer Community (VDC) and Steam guides. The Reason for that is the majority of the content found in this guide is taken directly from the Valve Developer Community, and is done because I wrote the same content found there and wanted to share it with more of the community found here - as I have read comments from people interested in how to get started mapping for the game but may be unaware of the VDC's existence and also might just want a simple 'How to get started!' guide without having to use too much time searching the web for answers.

This guide will however NOT teach you how to use any of the tools included with the SDK and it is assumed that the user either already knows afterwards how to use them or is willing to learn more about their usage through both external sources, as well as other guides that may be available elsewhere on steam - when the time comes. 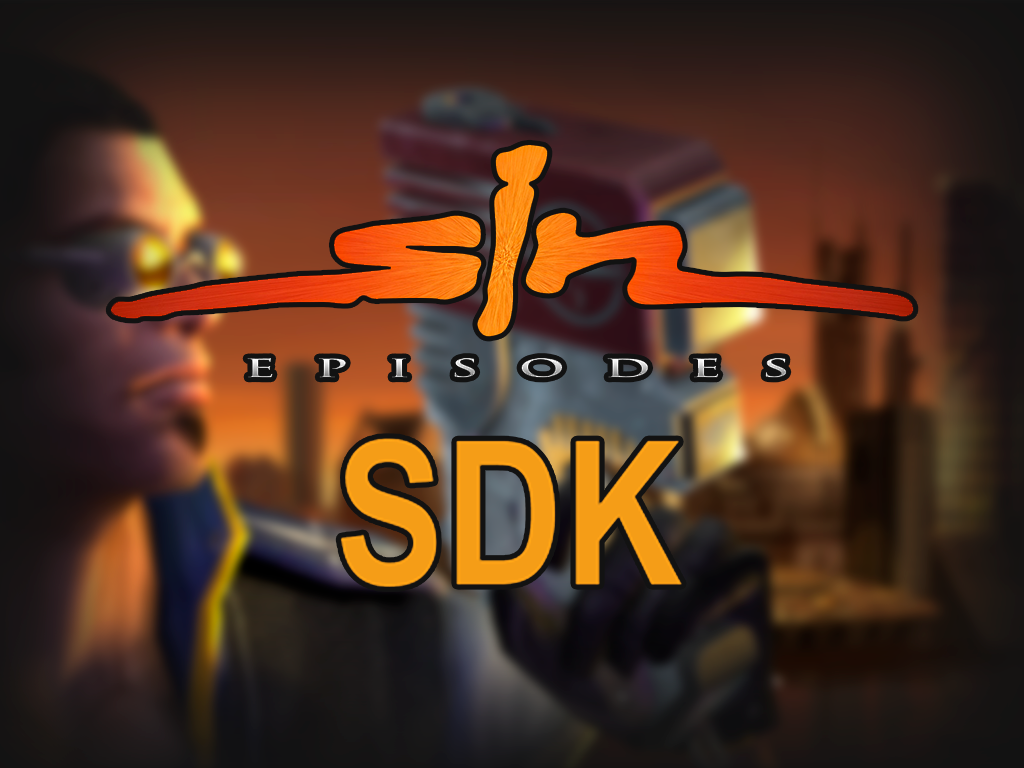 To install the Sin Episodes SDK, either open the following link in your web browser Install or follow the steps below:

Should you not be able to install the SDK to your computer from either of the options listed above, which some people have had problems with, you can choose to download the full package from the Dropbox link here instead and unpack it to your Steam's common directory for the SDK listed below.

By default if you have downloaded the game and SDK to the same place as your Steam folder, the base locations will be:

If you instead have downloaded it to an external drive (like the D: drive in this instance), the path will instead be:

If you are running a linux based system, the path is as follows where USERNAME is your local account username:

Use these locations throughout the guide everytime there is a mention of content inside any of the base folders. If you want to create a desktop shortcut, do so by right-clicking on the Sin Episodes SDK entry in your Steam library and clicking Create desktop shortcut from the context menu.

Running hammer on a linux system

If you are using a linux based system you have to do a little bit more setup to get it running, luckily this has been made so much easier than in the past with the release of Proton which allows hammer to run without much additional setup.

Right click on the SDK entry in your steam library and go into its properties, there in the Launch Options field make sure to add PROTON_USE_WINED3D=1 %command% and enable Proton Experimental under the Compatibility tab afterwards. From there on you should be able to run hammer without any problems from your steam library.

By default when opening the Hammer Editor or any other tool for that matter from the SDK for the first time, they will crash upon launch with the error message 'Can't find steam app user info', which is possibly due to the SteamPipe Update which changed the namescheme of the user-specific named folder found in SteamApps to common and made the SDK unable to locate the programs.

To fix this, simply create a new text file with notepad and call it SteamAppData with the file extension of .vdf in SinEpisodesSDK\config and place the text below inside of it - you will have to create the config folder manually as it does not come bundled with the SDK. Once the file is saved, all of the programs should now launch without any problems.

The game provides a Loose beta build everyone can opt into, which upon doing so redownloads all of the content for the game (~1.1 GB), with the difference from the standard build being it essentially unpacks all of the VPK files (Valve Pak; uncompressed archive files) to SiN Episodes Emergence\SE1 - meaning it is not needed to extract any of it with Third Party Programs everytime you perhaps want to modify some of the game's content. To install it:

There are three example maps included with the SDK, one being from the arena gamemode and two from the singleplayer campaign, but they are located inside of a VPK file and need to be extracted to open them up in the hammer editor; as the SDK unlike the game does not have a beta build that unpacks the files.

You can use these example maps to find out how the developers have made certain things in the game and can also be useful for if you want to learn how to create your own arena gamemode map.

The icons in Faceposer are broken

All of the icons inside of Faceposer are missing and this is not a problem unique to SiN, but to fix it download this ZIP file and extract the folder gfx to SiN Episodes Emergence\SE1 and restart Faceposer. The icons should now show up correctly.

There are only three official maps from the game included as example maps to open up in the level editor, but what if you could get access to all of them instead? This is a very simple procedure and can be done by downloading a decompile tool, but will however not produce one hundred procent exact results to the originals and may only be for learning and usage of some parts of its content in your own maps. Also when decompiling other people's maps, do NOT under any circumstances use others content in your own maps - even parts of it, without permission beforehand.

First of download and extract BSPSource to your computer, once done open up the file inside named bspsrc.jar (you need to have Java installed on your system before you can do this however). A window will pop and ask you what map files you want to decompile, here either click on the Add button and select the individual map files (those with a .bsp extension in SiN Episodes Emergence\SE1\maps) or select all of the map files manually and drag and drop them all into the box; then simply click on the Decompile button. Be sure not to select any with the same name as the example maps earlier extracted, as this will just override them with inferior imprecise decompiled counterparts.

Find a destination folder where to place the decompiled map files into, like SiN Episodes Emergence\SE1\maps\decompiled and it will automatically convert them into .vmf files that you can open up in the Hammer Level Editor. If Hammer ever gives you a warning with 'For your information, 2 solid(s) were not loaded due to errors in the file', just ignore it and press OK. You should now have access to all of the map files.

Make it easier to create maps with prefabs

Creating a map can take a very long time, especially if you should make a bunch of the stuff from the campaign all by yourself within your own level. This process is not always needed however as I have created a pack of 256 premade fabrications, also called prefabs, which can easily be imported into your level and works out of the box without much hassle to get them working. These prefabs are sectioned into different part: environmental which have some sort of property, interactable where the player is able to make the object do something and world which are mostly static world elements.

The pack covers a wide range of stuff found throughout the campaign for you to use and can be inserted with the click of a button while also being capable of being used multiple times without any conflics between the individual instances. Finally the pack also has an example map for the arena gamemode to show the basic setup for how to create one from scratch.

Where do I go from here?

The SiN Episodes Level Creation page is a good place to go if you are familiar with Source mapping already. If not, you will need to master the basics of Source level design first.

If you want to learn about how to create content for the Source Engine in general, the main page of the Source SDK documentation is a good place to start.

The SiN Community is from what I know of no longer around due to Ritual Entertainment's buyout, which led to the series' and eventually community's death, however the Source Engine Community itself is still thriving to this day with new games and mods releasing all the time.

Thanks for taking the time to read this guide and I hope it has provided all of the information you need to begin your journey into creating possible maps and mods for the game. If anyone finds any information in this guide misleading, not describing something well enough, contains any spelling mistakes or just unsure of anything; please write a comment below and I, or possibly someone else, will try to answer/fix the problem as good and fast as possible.

I hope to create more content and guides for the game over time, anyways thanks again and have a wonderful day!

I always thought about making at least a map or two with SIN when I mapped with HL2, just never came around to it. But a tut like this would have been so helpful back then.

And for HL2 mappers, Sin mapping is exactly the same as it is for HL2!
So try it,