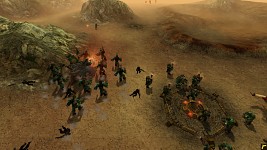 Orks are big, shooty and choppy. With high numbers of units in a squad, decent melee options and ranged units they can mass until their enemies drop. Their vehicles are tough and their relic units even tougher and extremely shooty. Most of their buildings shoot as well, which helps.

Orky pop now increases twice as fast as before. The availability of certain upgrades and units based on Orky pop has been tweaked. Waaagh!!! Banners detection radius has been reduced and get increased by the add-ons.

The Big Mek is now more accurate at ranged combat but his damage has been reduced. The Kustom Tellyporter now requires a research instead of being available right away.

Flash Gitz do less damage than they did before and their damage to Heavy Infantry has been reduced further. Their mob value has also been increased due to the small squad size

Killa Kanz are now in squads of 3, with damage cost and health reduced.
The damage of Fighta Bommas has been reduced but the fire rate has been increased.The damage of Wartrukks Big Shoota has been decreased.Wartrakks can now upgrade to Big Shootas to be effective against infantry.

The accuracies and moving accuracies of the Squiggoth's ranged weapons have been increased.

Most infantry squads can now use Stikkbombs.
Tankbustas can now use Tankbusta Bombs like they used to.
Bad Doks can no longer use the Burna Bomb ability.
Mega Armoured Nobs Supercharge is now a toggled ability.

'Ard Boyz have been added. They are tougher and do more damage in melee than Sluggas and they can be upgraded to Chainswords.
'Ard Shoota Boyz are similar to Shootas but are tougher and cost more resources than them, 'Ard Stormboyz are similarly tougher than Stormboyz and 'Ard TankBustas are tougher than TankBustas while being more costly.
Kommando squads have been added with the ability to use Infiltration, and both anti-infantry and anti-vehicle abilities. They can use the Assassinate ability through research to temporarily increase melee damage and kill enemy infantry at low health. The Kommando Nob can use the Burna Bomb ability through research.
Loota squads have been added with high damage and long range but low accuracy.
Bomb Squigs can now be spawned by Tankbustas. Exploding when close to enemy units, they do a lot of damage and knock down enemy infantry.

The Deff Dred has been added with the ability to upgrade to Rokkit Launchas (good anti-vehicle damage) and Megablasta (for damage against Heavy Infantry and most other armour types). It also has the ability to Supercharge, moving more quickly at the expense of losing health while the ability is active.
The Gunwagon is a transport capable medium ranged artillery vehicle with a Lobba that can upgrade to a more powerful version, the Kannon more capable of penetrating vehicle armour and the Zzzap Gun for better damage against most armour types.
Battlewagons are a new heavy vehicle option as an alternative to the Looted Leman Russ Tank, with less armour but better ranged effectiveness with a Zzzap Gun and multiple Big Shootas on the sponsons, turret and hull that can each be upgraded to Rokkit Launchas for better anti-vehicle damage. It also has a Dethrolla that does short ranged damage and mild disruption at the front. This being at the expense of increased cost compared to the Looted Leman Russ.

The Weirdboy is a new Commander choice with powerful psychic abilities. Dis Is Takin' Too Long to increase the movement speed of nearby troops, Warpath which increases the melee damage of the attached squad and Frazzle that fires projectiles that deal damage over an area. These abilities have a chance to backfire though, dealing damage to the Weirdboy and nearby units and also disabling the ability.
The Deff Wave psychic ability is one of the most powerful and knock-backy abilities. Dealing wave after wave of thunderous energy to damage and throw units around, enemy, friendly or otherwise.

A new variety of Stikkbomb - the Boomy Stikkbomb, effective against vehicles and buildings is useable by Slugga Boy Nob Leaders.